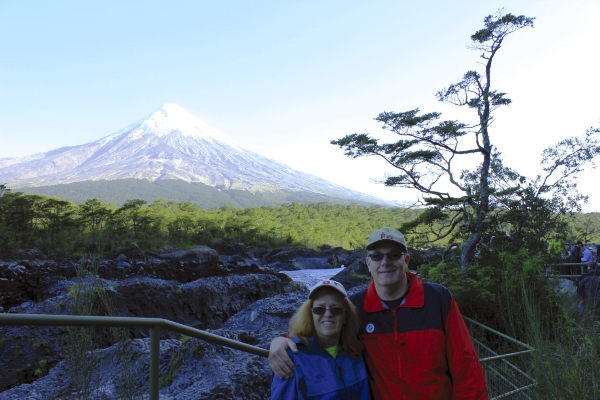 Derek Miller: Patagonia is like nowhere else on Earth

Growing up as a kid, I often found myself reading articles — or should I say gazed at photographs — that were in the numerous National Geographic magazines located throughout my grandparents’ home.

I was always drawn to the incredibly vivid images of far-away lands that were strategically placed on the cover of the magazine.

I remember how excited I was whenever I would see a large map or poster that would be inserted into the magazine. I couldn’t wait to pull the insert out and hang it on my bedroom wall. Having that map or poster on my wall was always a conversation piece, especially whenever my friends came over to visit. But more than anything else, it was a constant reminder to me that I would one day get out and travel the world.

One of those National Geographic inserts that got my immediate attention was a map of a place called Patagonia. The name “Patagonia” alone had me hook, line and sinker. Initially I equated Patagonia to a Narnia – like mythical place with fairy tale characters and romantic names.

Not only was I captivated by the name of Patagonia, but the pictures of Patagonia took me to a whole new level of intrigue that I’ve never experienced with photographs before.

Fast forward forty-plus years, and I felt the time had come for me to finally discover and see for myself in the flesh the wonderful Patagonian images that I had displayed on my wall long ago.

After the long 14-hour journey from the United States, I quickly came to realize how sparsely populated the region was. Much like my initial impression of the name Patagonia, I almost got the surreal sense that this place was truly mythical. I knew at this point that I was a long, long way from home.

Patagonia is located at the southern end of South America, shared by Argentina and Chile. The Andes Mountain Range is the natural dividing or border line that separates both countries as well as their own respective Patagonia territories.

For pre-planning purposes, it is important to note that Argentina Patagonia features arid flat un-forested grasslands and deserts, while Chilean Patagonia has glacial fjords and some of the most beautiful temperate rainforests on the planet. Both sides offer their own distinct ruggedness, wildness, harsh environments and many other characteristics.

In addition, the Argentine Patagonia has the strongest and wildest winds in South America, which blow across eastern Patagonia.

Patagonia is a vast and wild land that has been barely settled or civilized since humans first arrived tens of thousands of years ago. The land mass of Patagonia spans a massive 431,000 square miles, occupying almost half of each country and yet only home to less than 2 million inhabitants.

The name Patagonia comes from the word Patagon used by the Portuguese explorer Ferdinand Magellan in 1520 to describe the native people of the region. At the time, Magellan believed the natives to be giants. However, it is now believed that these Patagones were actually Tehuelches (a generic name given to a group of indigenous people of the Patagonia region) who were somewhat taller than their European counterparts.

Patagonia enlightened the young inquisitive Charles Darwin and inspired aviator and author Antoine de Saint-Exupery. It inspired ornithologist (a type of zoologist who focuses on birds) W.H. Hudson with a mystical sense of nature.

Along my travel down the great highways of Argentina’s Ruta 3 and Ruta 40 or Chile’s Carretera Austral it was clear that the land was unfriendly to human settlement. I saw mainly sheep, flightless Rhea and Llama-like Guanacos. Darwin described the Guanaco as an “elegant animal with long slender neck and fine legs – a deserved compliment for this speedy, high Andes inhabitant.” The Guanaco is believed to be the ancestor of the domestic Llama. Eventually I came to the Andes, where the Chilean ice-fields break through to form glaciers on the lakesides, or to the lonely island of Tierra del Fuego. Even with the harsh and rugged environment, Patagonia continues to charm intrepid travelers, and in the past two decades hotels have opened across the region to provide comfort and luxury.

One of the many highlights of my tour through Patagonia, and one that I would highly recommend if you ever get to travel there, is the Punta Tombo Penguin Rookery. Punta Tombo is about 100 miles south of Puerto Madryn, Argentina. Patagonia is the largest and most important Magellan Penguin colony and nesting ground in South America. It was an incredible experience to see the penguins up close and to walk among thousands of nests. I couldn’t stop marveling at this wonder of nature and these unforgettable birds.

From September through March, this vast rookery and breeding area hosts approximately 2 million Magellanic Penguins that arrive specifically to procreate and prepare their offspring for migration. I witnessed penguin parents standing in front of their nests, protecting their precious eggs from predators. In some instances, I was able to observe the parent waddling to the sea and back to the nest to get food to nourish their babies. From November onward, it is possible to see baby penguins leaving their nests.

Other wildlife was plentiful, as I was able to see Seagulls, Guanacos, Chimangos (type of Falcon), Cormorants (large bird with long neck and short legs – dark plumage) and Rheas (large flightless birds).

Another must-see experience is a boat ride through the Beagle Channel. The channel received its name from the ship (the HMS Beagle) sent to survey Patagonia and Tierra del Fuego (a group of islands at South America’s southernmost tip, shared by Chile and Argentina) in 1826.

The trip through the channel was stunning, as I was blown away from the dramatic landscape of snowy mountains, glaciers, tundra and wind-sculpted trees. A magnificent backdrop of jagged mountain peaks set the mood as the boat careened past Isla de Los Pajaros (Bird Island), home to an array of exotic birds, including Cormorants. Soon after Bird Island was Isla de Los Lobos (Sea Wolves Island), a beautiful rocky outcrop and habitat to several marine species, including many Sea Wolves, who inhabit this region year-round. It was truly a smorgasbord of natural wonders.

Also in the Beagle Channel is the Les Eclareurs Lighthouse, known by Argentines as Faro del Fin del Mundo, or the “Lighthouse at the End of the World.” First lit in 1920 and still in use today, this famous red-and-white lighthouse, poised on its own on an islet, gives one the incredible feeling of being at the end of the world.

Patagonia is like nowhere else on Earth and demands that the traveler be patient and have the willingness to move slowly. Patagonia is on geological time, and hasty visitors will miss everything that matters.

Even long after the trip to Argentina and Chile, my fascination for Patagonia remains stronger than ever. The tremendous land features, people, wildlife and culture offer the general observer a wealth of adventure and exploration. Patagonia is home to stunning mountain peaks, vast and empty steppes, glaciers, ice-fields and amazing national parks.

Patagonia is an awesome display of natural beauty, virtually untouched by the hands of man.