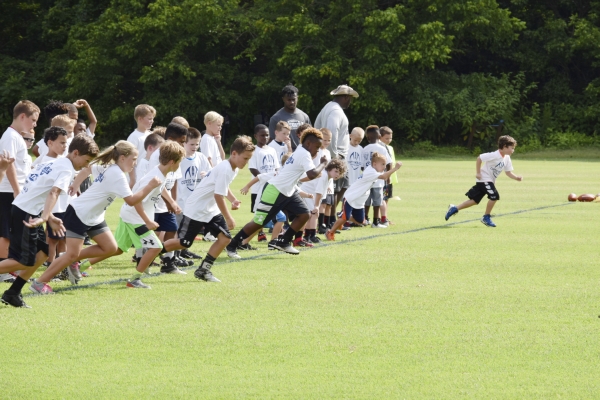 ‘The joys of football:’ Catawba camp has record attendance

SALISBURY — It’s been four years since the Curtis Walker Football camp started at Catawba College, and this year, the free event attracted record numbers of kids.

Coach Curtis Walker said he started the camp because he noticed that there weren’t any local football camps for elementary and middle school students.

“I just wanted to give them a chance to experience the fundamentals of the game,” he said.

The half-day program is available to kids ages six to 13, and teaches them the basics of football, as well as letting them try out different positions.

“It works well because they will actually get 25 minutes in each position,” Walker said.

By the end of the day, he said, many kids will have settled on offense, defense, or a special position.

The first year it ran, Walker said there were only a handful of students. But the program has grown exponentially, topping out its fourth year with 225. Though it’s geared towards local students, campers have turned up from Hickory, Roxboro and even South Carolina. But Walker said the camp is, and will always be available for, local students.

“That’s why we put a free tag on it,” he said, “because we want it to be a community camp.”

Friday morning, camp staff, consisting of Catawba coaches and football players, split the kids by age and put them through their paces. The groups clustered in a large circle around staff, practicing stretch routines on the grass of Catawba’s practice fields.

By the time the 11 – 13 year-olds began drills, the younger students were still loosening up.

“It took a little longer because they’re experiencing the stretch routine for the first time,” Walker said.

But soon, shouts echoed across the field as students tried out speed drills – exercises designed to teach them proper running stance and posture. The kids lined up and raced from one end of the field to the other.

“At this age, you think they could all run for days,” Walker said. But there’s still a lot to learn.

Some campers come back year after year. For a gaggle of middle schoolers, now on their third year at the program, the camp has prepared them to play football in school, and provides a good workout.

For others, it’s just a good way to spend the day.

Nick Clement, age 7, came to the camp last year, and said he returned because it was a lot of fun. Last year, he said, they got to tackle dummies, and he hopes he’ll get to do that again.

“Getting out, getting dirty – that’s the fun part,” he said.

But Clement said football is not in his future.

Walker said it’s not unusual for campers to return year after year. Walker and his team have seen campers show up at Catawba football games, and at elite training camps the college runs for older players. But Friday was all about “experiencing the joy of football.”

“Today is a day where we just want to come out and have fun,” he said.

New Chief: ‘I would ask the Salisbury community to be our partner’