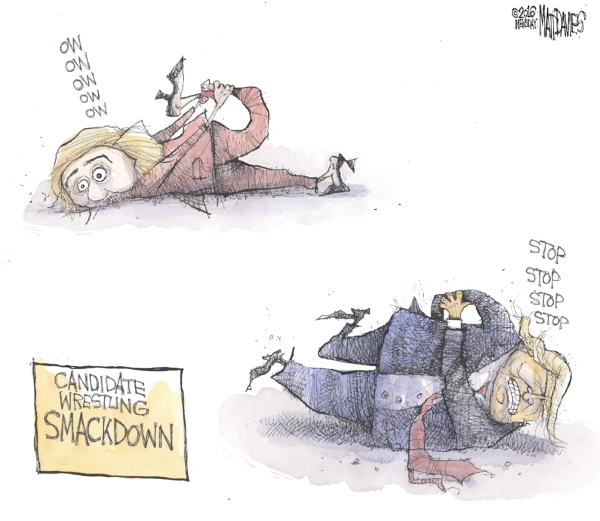 … Obama hits the campaign trail for Clinton in Charlotte

Classified emails are not a big deal. Any other citizen would be 10 feet under the jail. Hillary is a liar and cheat — and those are words from Democrats. Here we go again, people drinking the Kool-Aid and every thing is fine. Wake up, America. Dump Hillary.

Resurrect Reagan! The gipper is probably spinning like a lathe in his grave.

It’s getting harder and harder to find a “good apple” in the political barrel. In fact, I haven’t even had the “taste of apple” for a long time!

… A free pass for Hillary

Three things: (1) Ms. Clinton was removed from the Watergate investigation for ethics violations, the beginning of an impressive list of such. (2) She has not been cleared of the charges; one must be charged in order to be cleared. The case could be reopened if the Clintons do not play nice. (3) None of this matters to some Democratic voters, sadly.

Mr. Moffitt, the Democratic National Committee is paying for Clinton’s travel, and President Obama can travel only on Air Force One because of security. Trump has made it abundantly clear that he can afford his own travel and security.

… Friends flow in for Faith 4th

I’ve been to the parade many times, and this was the worst parade I’ve been to. There were many, many long gaps in it. At one point, it was at least a 12-minute gap. After the firetrucks went through, it was even longer than that. I’ve never seen a parade with so many gaps in it.

Whoever is in charge does need to do a much better job of getting the gaps closed up. The fire trucks ran, and 10 or 15 minutes later, here came the next segment of the parade.

A parade should have clowns, horses and some excitement to it. Sorry, this year’s Faith parade was lacking a lot, including the long wait in between.

I didn’t like the men carrying big Confederate flags. This was not a Confederate holiday; this was an American holiday. Personally, I really liked the American veteran in his track-driven wheelchair carrying an American flag.

I also didn’t like all the monsters walking through (three different organizations). Personally, I would have liked a few more church floats with VBS themes; that would have been good for the children to see.

I hear nothing mentioned here about a behavioral therapist. This position is key to a program like this. I am very pleased to see Rowan County headed in this direction.

Why does the teacher have to deal with the kids’ crap? They are there to teach, not worry about getting cussed or spit on. … Kids tell me, “If you write me up, the principal won’t do anything about it.” Until somebody grows a set and makes it hurt instead of babying them, you will have a problem.

You can’t reach the child until you reach the family. Should we expect that to be the teacher’s job? Or should other social service professionals begin to work in tandem with teachers? And where will the money come from, Governor McCrory?

… Letter: It’s not about equality

Mr. Roberts, I am happy for you that you are not LGBT (or Muslim, or female, or black, or …) and that you have everything perfectly figured out. (Oh, and don’t worry. Since they can’t procreate, they will surely extinguish themselves in one generation. Can’t miss.)

Society keeps you people just dumb enough to not realize that you don’t need the rich and their money. If you really wanted a job, you’d just take the mill back yourself. Instead, you wait with your hand out for scraps from the master’s table.

Our state continues to flip-flop on what they tell us about our very own water, and we will not drink the water! … Our county was already going to run water lines down Long Ferry Road like a year or two ago, but still we are at 14 months and counting. We still have questions about this water and these lines and water bills yet to come.

But our biggest deal with our contaminated water is Duke Energy not being forthcoming and not meeting with us, the families living with this.  My God, they have met with everyone else but us. And our elected officials did not vote for full clean up at Buck after over 8,000 state comments and our own state hearing where every single person spoke in favor of full clean up, except one Duke employee.

Every election cycle, the Democrats pull this out of their bag of tricks. This has nothing to do with the quality of care our veterans receive. This is only about the Democrat operatives (AFGE) trying to shore up their base and scare the veterans into supporting their cause.

As a vet, I (support) whatever it takes to cut wait times and get us the medical care we need.

Although I choose the VAMC for my medical care and find my care to be excellent, many others have different experiences and for many reasons prefer other options.

Despite common belief by some, the function of the Veteran’s Administration is not to ensure jobs for the community; its function is to provide quality medical care to those who sacrificed for this country, and it should not matter where that care is provided or by whom it is provided. It should be the veterans who make that decision, not VAMC employees, employees who would quickly protest if their right to choose their medical care provider was taken away because someone at another office might lose his or her job.

Based upon the protests, many employees apparently believe that they have a constitutional right to perpetual employment once hired by the government. I suggest they do not. More concerning is that government employees would put their wants and needs before those who they were hired to serve.

Perhaps it is this mindset that motivates many veterans to seek care outside of the VAMC.

The very idea of moving veterans into the private sector for medical care is ludicrous. Quality over quantity should be the concern of Hudson and Tillis. Having received care from both the VA and the CHOICE program, I chose the VA over outside care every day, any day. This bag of tricks is motivated by Republicans, not Democrats, and instigated by outside sources. The veterans better keep an eye on the tactics the Republican Party is trying to slide through.

If these protesters really and truly want the best for veterans, I don’t think their protests show it. It is not taking jobs or anything away from these workers. The VA will still operate as it does now.

The reason for the need for additional care facilities is to help with the needs of an ever-expanding group of veterans. America will never stop sacrificing its men and women in useless causes, so the number of veterans needing health care will only continue to increase.

Currently the VA is being overwhelmed trying to give this support. I certainly don’t think anyone’s job is in jeopardy.

I have been going to the Salisbury VA and have had the same primary care physician for 18 years. I have been very pleased with the level of care I have received. The nursing staff and the doctors, as well as the people in physical therapy, lab, X-ray and any other of the support professionals, have all been great.

I did try Vets CHOICE recently, or I should say I started trying about four months ago and only recently got an appointment/time with the doctor I specified. I did so because the sub-specialty I needed for a particular problem is not offered in the local hospital. That CHOICE program is really screwed up — doesn’t even compare to the local hospital.

Now, there’s a program that really needs a major overhaul. The problem with the VA is in the malfunctioning administrative services — the paper shufflers and pencil pushers.

As a vet I want to choose which doctor I see. I want the same option other government employees have. Tell Congress they have to go to the VA for care and this mess will be solved.

Don’t be fooled. Obama wants everyone to fall under Obamacare. If he could he would do away with the VA for good. As it is going, the VA will be used for paying claims only, if it’s allowed to survive.

“I’ve definitely never walked away from one regretting it — no matter how hard it is.” — Jeffrey Motes, nurse, on... read more