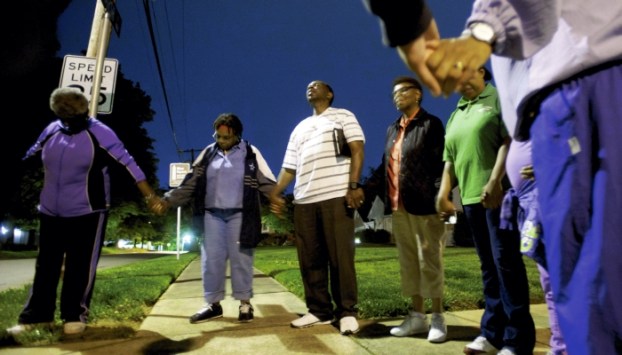 SALISBURY — A local faith-based grassroots organization, Nightcrawlers, is holding a community gathering tonight in response to the disturbing incidents across the country over the past week — officer-involved shootings of black men in Minnesota and Louisiana and the ambush that killed five Dallas police officers.

Nightcrawlers will meet at 9 p.m. at Father’s House of Glory Church, 2218 Statesville Blvd., to give those in the community a space to talk about what has happened this week.

The gathering will end with a prayer walk.

Local pastor and Nightcrawlers member Anthony Smith said after all that has happened this week, “obviously anger, exhaustion, a sense of powerlessness kind of came over me, and just sadness.”

Smith, a pastor with Mission House in Salisbury, said his church provided a space for members to lament and for some to vent about the shootings that occurred this week.

“I’m encouraging other pastors and community leaders to let people express their pain and anger and to give space for that,” he said.

He also said and posted to his Facebook social media page some ideas that have been shared abroad, which he says is a call for collaboration between the city and the community.

Smith said in the post one idea is a collaboration between city government and a multi-racial community stakeholder coalition on how Salisbury can take seriously and locally implement President Obama’s 21st Century Community Policing Report and recommendations of Campaign Zero.

Smith also suggests that there be rituals and vigils of lament and conversation on violence, peacemaking and racial justice hosted by churches and community groups with doable solutions.

Another idea that was shared was to have a community forum after the first 30 days following the installment of the new police chief, Jerome Stokes. Smith said he’d like to hear Stokes’ expectations and hear expectations of a community coalition focused on law enforcement and community relationship.

The nation has been rocked this week by the shootings.

On Tuesday Alton Sterling was shot and killed during a scuffle with police after a homeless man reportedly called police about a man at a Louisiana convenience store who was “brandishing” a gun. Sterling was at the store selling CDs.

A day later, in Minnesota, Philando Castile was shot inside a car by an officer who had pulled he and his fiancee over for a broken taillight. Castile’s fiancee, Diamond Reynolds, calmly narrated the aftermath of the shooting and posted it live to social media.

What began as a peaceful protest Thursday night in response to those deaths turned deadly when a gunman ambushed Dallas police officers, killing five and injuring seven others, before he was killed by police in a parking garage.

Calls and emails to local law enforcement for comment has not immediately been returned.

Temperatures to be in upper 90s, will feel like low 100s