Dallas must wake from this nightmare united 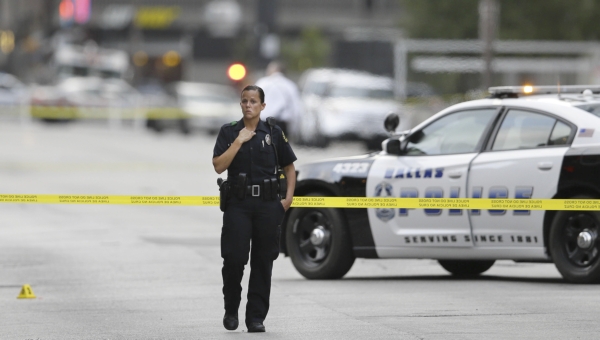 A Dallas Police Officers guards the scene of a shooting as investigators work in downtown Dallas. Snipers opened fire Thursday night, on police officers in the heart of Dallas during protests over two recent fatal police shootings of black men. (AP Photo/LM Otero)

The following editorial was written by the Dallas Morning News

Our hearts are broken.

For the dead and wounded Dallas officers.

For their loved ones, friends and colleagues.

And for the Dallas Police Department, which has often gotten it right in this ugly time of national tensions between law enforcement and their African-Americans constituents.

A peaceful protest in downtown Dallas on Thursday night, planned to mark police shootings in other cities, morphed into a horrific sniper ambush on the men and women sworn to protect them.

These were police officers who had earlier posed for photos with the demonstrators, shaken their hands and provided security for their rally. Throughout the evening, mutual respect was visible between the two groups.

These were the police officers who, when shooting broke out from high above them, tried to make sure protesters got out of harm’s way.

These were the officers who then did what law enforcement heroes always do _ they rushed toward the source of danger to try to stop its perpetrators.

Along the way, they picked up their fallen colleagues.

It was a night of horror unlike any in recent memory in this city. Conflicting accounts of suspects. Reports of a possible bomb. And a death toll that slowly rose into the night.

In these first hours of mind-numbing tragedy, what’s most important is that we focus on those police officers and their families. In whatever manner you deem most appropriate, send comfort, prayers and well wishes to them all.

Likewise, let us all try to keep our grief from morphing into toxic anger. No doubt several evil people set out to do great harm by opening fire on those sworn to protect us.

Now we must wake up and unite. If we lead with anger, nobody wins.

Editorial: The perils of vacancy