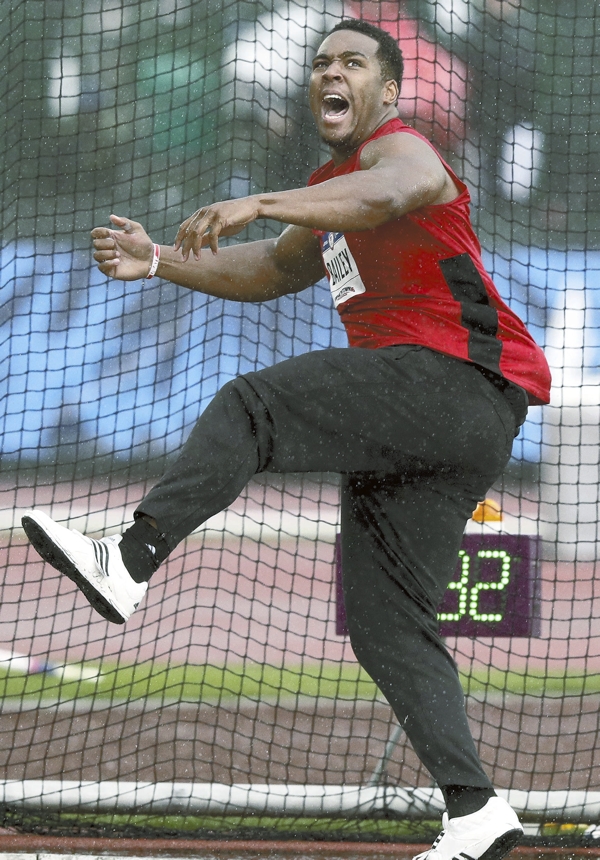 AP Photo/Charlie Riedel... Tavis Bailey follows through on one of his discus throws at the U.S. Olympic Track and Field Trials, on Friday, in Eugene Ore. Bailey, an A.L. Brown graduate and former athlete, finished second and earned a spot on the U.S. Olympic team. He’s also a graduate of the University of Tennessee.

Last summer, 2010 A.L. Brown graduate Tavis Bailey finished runner-up in the NCAA Championships in Eugene, Ore., in his last college meet for Tennessee.
That was a performance he described as more heartbreaking than satisfying.
His second-place finish in Friday’s Olympic Trials on his return to Eugene’s Hayward Field was a cause for celebration and American-flag waving. This time time second place meant Bailey is headed to Rio as part of the three-man discus delegation on the United States Olympic team.
There was an awful lot riding on Friday’s throws, as track and field finds the spotlight only every four years — the Olympic years.
It could be a life-changing performance for Bailey, who headed to Oregon without sponsorship. A salesman in Knoxville since graduating from Tennessee, he did his working out and lifting late at night following his day at the office.
He paid his own way for travel and for expensive lodging within walking distance of the stadium.
Bailey is a testament to perseverance.
From this point forward, he may have corporations lining up to sponsor him. He’s quite a story, the football guy who became a track guy.
Bailey finished sixth with a best throw of 197 feet, 5 inches in Thursday’s opening competition, as an elite field of 24 was trimmed to 12.
Bailey’s first fling in Friday’s final was his strongest — 61.57 meters (202 feet). That was in keeping with his normal game plan — get a solid mark early, and then swing for the fences. That initial throw held up on a rainy day in Oregon.
Mason Finley finished first in the discus final, while Andrew Evans took third. Those athletes also were unsponsored.
Bailey may have even betters throws in him in Rio. He had a personal record of 215-11 last month.
Bailey was a fine football player and a stellar student at A.L. Brown High. He was an East-West All-Star as an offensive lineman and he thrived under the strength and conditioning guidance of assistant coach Todd Hagler.
Bailey signed with Lenoir-Rhyne following his senior football season, but his senior track season for the Wonders in the spring of 2010 was eye-opening and offered a glimpse of what was to come. In the 3A State Championships, Bailey smashed the NCHSAA record in the discus — for all classifications — with a throw of 185 feet, 1 inch. That’s still the state record.
Then Bailey, competing for the Salisbury Speedsters, was the AAU Junior Olympics national champion in the discus with a throw of 191-2.
Bailey was red-shirted in football as a freshman at Lenoir-Rhyne in 2011, but when he won the discus in the 2011 Raleigh Relays, he made the decision that his brightest future was in track and field. Not long after that, he transferred to Tennessee to be part of one of the nation’s strongest programs.
The rest is history. Bailey developed into a three-time All-American for the Volunteers, with his college career culminating with that 2015 second-place finish in the NCAAs.
Bailey also has competed with USA across his broad chest before. He was the silver medalist in the 23-under competition in the North America Central America Caribbean (NACAC) Championships held in Canada in 2014.
Bailey’s parents are Edwina and Charles Wright, Jr. of Kannapolis, and they were the inspiration for him making the USA team.
“Those late night calls to my mom and my dad definitely made it a lot easier, because it’s not easy, at all,” Bailey said in that June interview with WBIR radio in Knoxville. “It would just mean a lot for me to give my dad a USA shirt or jersey or something and say thanks for all the trips to AAU meets, the cleats, the throwing shoes. They just did a lot for me coming up, so I just want to do it for them and all the people who have supported me.”
This could be just the first Olympics for Bailey. As a 24-year-old, he figures to be bigger and stronger in 2020.