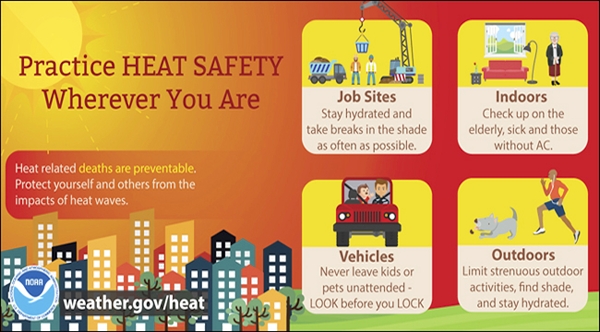 Tips on heat safety from the National Weather Service.

Start preparing today for Friday and Saturday, when temperatures in the upper 90s will lead to a heat index of 100 degrees or more.

And be prepared today for more possibly severe storms like we’ve seen over the last two days.

The chance of showers and storms today is 40 percent. Skies will be mostly cloudy, with a high of 91. West southwest wind will blow at 5-11 mph, with gusts as high as 18 mph. Damaging wind is possible in today’s storms, as well as hail and frequent lightning.

Tonight also has a 40 percent chance of storms and showers, mainly before midnight. It will remain mostly cloudy, with a low of 71. West wind will calm to 5-7 mph.

Expect early morning patchy fog Friday, then put on your sunscreen and find the coolest spot you can, because it will be mostly sunny and 96 — with a heat index around 102. West wind will just move the heat around at 3-7 mph.

This heat is serious. Don’t leave a person or a pet waiting in a car. Make sure your friends and neighbors have a place to get cool and have plenty of water. Do not leave pets outside.

Friday night has just a 20 percent chance of a shower or thunderstorm. It will be partly cloudy and quite warm, with 74 as the low.

Saturday will be another scorcher, with mostly sunny skies and a high of 95. West wind will blow at 6-11 mph. Saturday night’s low will be 70.

Monday brings a 30 percent chance of showers, but will be partly sunny and 90 again. The same chance of rain and thunderstorms holds through Monday night, with a low of 69.

Tuesday also has a 30 percent chance of showers and storms, with partly sunny skies and a high of 89. The chance of rain increases to 40 percent Tuesday night, with a low of 71.

Wednesday has a 30 percent chance of showers and storms, too, and will be partly sunny and 89.