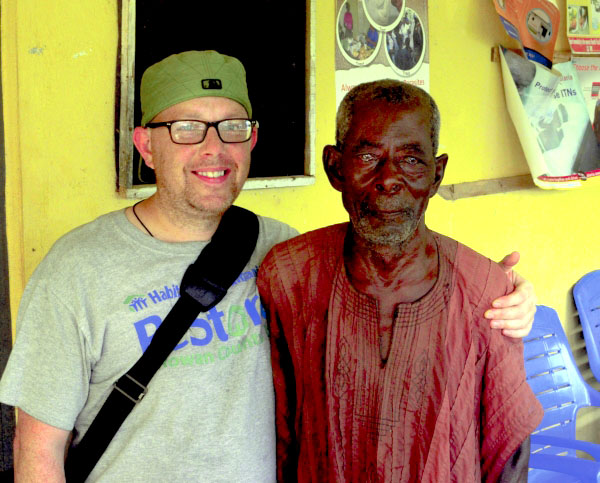 Jeffrey Motes, a nurse at Novant Health Rowan Medical Center, poses for a photograph with the chief of Butre during Motes' medical mission trip to Ghana, Africa. Submitted photo

SALISBURY — Whenever he returns from an overseas medical mission trip — he has now been on three — Jeffrey Motes of Salisbury can’t shake a certain emotion, a sense of frustration maybe.

Motes has gone back to the night shift at Novant Health Rowan Medical Center where he is a critical care nurse. From June 2-14, he joined friend and fellow nurse Brynn Green and Dr. Matt Harrison as part of an 11-member medical mission team to Ghana, in West Africa.

Harrison was the only doctor and Motes and Green the only nurses. During its stay, the small mission team saw and evaluated 1,374 patients over five clinic days.

Motes and the others went long stretches without showers. Mosquitoes dined on them regularly, and there was no air-conditioning in the three different villages where they worked.

In most cases, the “community clinics” were a school or a brick building, furnished only with a table or two. The clinics were usually staffed by a nurse and midwife who were employees of the Ghana federal government.

The mission team members worked 12-hour shifts, and every morning 100- to 200-plus people were waiting to see them.

“It wears you down,” Motes says.

For Harrison, a resident of Mount Pleasant, it was his sixth medical mission trip to Ghana, and this time he was able to take his daughter, Rachel, with him.

Motes previously had accompanied Harrison to Ghana in the spring of 2013, then from Dec. 29, 2013, to Jan. 11, 2014, he joined Harrison on a mission trip to help the Montagnard people in Vietnam.

“I’ve definitely never walked away from one regretting it — no matter how hard it is,” Motes says.

On those first two trips, Motes was still a nursing assistant and a full-time nursing student at Rowan-Cabarrus Community College. One of his classmates was Greene, and they promised each other to go on a medical mission trip after they graduated and became nurses.

“So we went to Africa,” Motes says.

He and Harrison had been talking about another trip to Ghana, and they spent eight to 10 months working out the details for the June trip. Helping Hands Medical Missions of Texas only agreed to sponsor them after Harrison and Motes had laid the groundwork and made the connections to people and facilities in Ghana.

They also had to make arrangements with medical staff and laypeople in Ghana. Motes says 18 to 40 people from the United States usually make up a mission, so an 11-member team was small.

Other U.S. team members came from Greensboro, Atlanta and Texas. A Ghana friend of Harrison’s, Eddie Kumasi, served as translator. Father Anthony Takoradi of Ghana also helped choose the villages where the team would work.

The mission spent two clinical days in Butre, two in Egyem and a day in Ashwana. Motes says team members took at least a dozen 50-pound suitcases filled with medical supplies with them on their overseas flight.

The supplies included 500 pair of reading glasses, handed out mostly to seniors. Father Noah Carter of Greensboro used prayer cards to help him test the vision of patients.

Seeing hundreds of people, the team handed out numbers to determine the order they would be seen.

A trip like this is a learning experience for doctors and nurses. They see cases not often treated back in the States. Stomach parasites were a problem for almost 300 patients. In the United States, the medicine to treat these parasites would cost about $20 a pill.

The mission caught a break when Blessings International supplied it with 500 of the pills.

“It was a very big blessing, no pun intended,” Motes says.

Harrison treated five cases of elephantiasis, a lymphatic disease that often leads to the gross swelling of arms and legs. Motes says it can be easily cured if caught early enough, but some people they saw had dealt with disease for 20 to 30 years.

For the first time in his six trips to Ghana, Harrison had test kits for malaria, which can lead to serious illness if not treated.

“Malaria does kill people,” Motes says. “People say it’s like the flu, but it can kill you.”

The pills needed to treat malaria cost about $6 in the United States, or the equivalent of 22 cedi, the currency in Ghana. None of the patients in the villages could afford the treatment, so team members often paid for the pills themselves.

The medical team also treated multiple cases in which patients still had gaping wounds from boating accidents or were mending from farming mishaps with machetes.

“We were doing everything we needed to do for them,” Motes says of the team’s approach in general, “and we worked harder to see more people every day.”

Motes guesses the mission dispensed about 50,000 pills, including aspirin, vitamins and broad-spectrum antibiotics. Motes and the others made their headquarters in the capital city of Accra, and the villages chosen by Father Anthony were all within driving distance.

A typical clinic day included mass in the morning, the 12 hours of work and a nighttime dinner on the beach with a time for reflection, when the mission participants asked themselves what they could do better the next day.

On the first Sunday when the team was in Butre, the team members drove 30 kilometers to Dixcove Hospital, which was headed by a Dr. Osei, who had received his medical training in Texas.

Motes also had the privilege of meeting the chiefs of both Butre and Ashwana. They helped at the clinics and often aided in the translating.

Motes says it meant a lot to the team members when the chiefs made sure to visit each one of them and say thank you. “Pretty powerful,” he adds.

Motes and Green left themselves time for sight-seeing. Ghana is a country of about 25 million people and is considered a leading democracy in Africa. Ghana, once known as Gold Coast, gained its independence from Britain in 1957.

Motes reiterates that at the end of these trips he has always felt exhausted and frustrated that he didn’t do enough. Before he left Ghana, Motes told both Green and his wife back home, Noelle, that he couldn’t do one of these medical mission trips again.

It was just too draining, physically and emotionally. Green had a word with Motes.

“Brynn said, ‘You can’t stop doing this. You love it too much.'” Motes recalls.

He knew she was right.