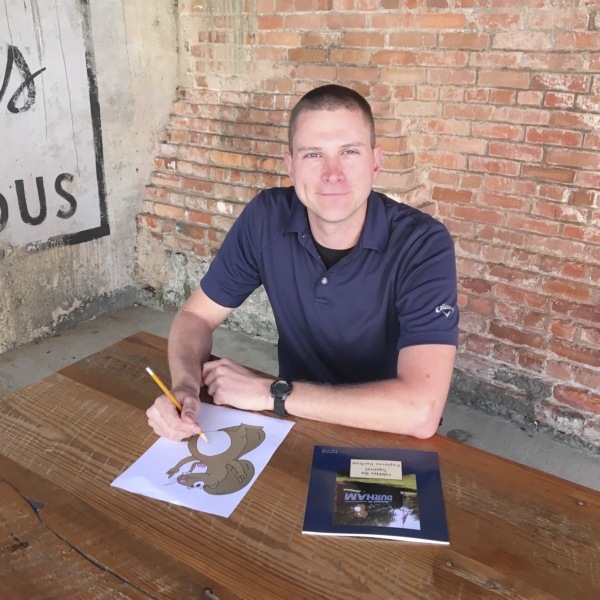 Paul Clark is author of the 'Nibbles the Squirrel' series of children's books. Submitted photo

‘Nibbles the Squirrel’ coming to Salisbury The cover of ‘Nibbles the Squirrel Explores Durham.’ Submitted photo

Paul Clark keeps busy with his job at the Durham Police Department and with his three boys, Thomas, 4, William, 2, and James, 5 months.

He is even busier now that he is the author of a children’s book series.

He says reading to and interacting with different children at schools and hospitals has been a rewarding experience for him.

Clark, who lives in Carrboro, said the idea to write a children’s book came to him when he noticed how abstract some of the books he read to his own children were. He says he wanted kids to be able to identify something that was familiar to them.

Being able to identify landmarks and being aware of your surroundings are some of the biggest things officers try to communicate to the public Clark said.

At the time he was creating the idea, there was a squirrel with half a tail that he and his family noticed in their yard. They began to call him Half Tail. Nibbles evolved from and is based on Half Tail. Originally Clark tried drawing Nibbles with half a tail but decided he looked too much like a chipmunk and ended up sticking with a full tail.

“There are squirrels everywhere,” Clark said. “Every kid can look out their window and see them.”

Clark said he has drawn for most of his life and got into painting while he was in college. About five years ago, he also wrote a screenplay for the Charleston International Film Festival titled “Office Escape.” Although it didn’t win, it received notable attention. It was about an unhappy office employee who spends his time daydreaming and after he gets hit by a car has a difficult time determining the difference between reality and his dreams.

Clark plans on his children’s series continuing in as many cities as possible. His third book, featuring Salisbury, is already in the works. Clark and his wife, Ann, are both originally from Salisbury and graduated from West Rowan and Salisbury High.

The Salisbury Train Station, City Park, and the historic downtown area are a few of the places Clark said will be included in his next book. He said he tries to stick to non-private businesses when using photos of places. He usually includes places that are a well-known part of the city and are free for everyone to visit.

Clark says he wants families to realize there is a lot of history and fun things to do in their local community.

“We’ll see how far Nibbles can go,” he said.

Dr. Steve Coggin is a curious person, interested in all things scientific – everything from birds that fly while asleep... read more