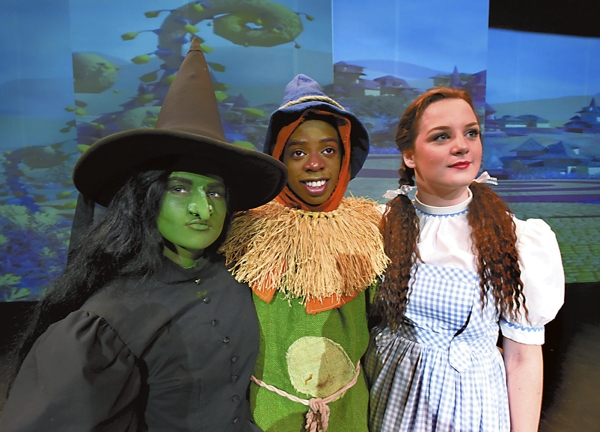 Sara Richard (Wicked Witch), KeShun Bradley (Scarecrow), and Graham Harrington (Dorothy) in the Children's Theater PPT production of "The Wizard of Oz." photo by Wayne Hinshaw, for the Salisbury Post

Like so many young girls, Dorothy Gale dreams of what lies over the rainbow.  Dorothy and her beloved dog Toto live on the Kansas farm of her Aunt Em and Uncle Henry, until the day a cyclone hits the area.  Locked out of the family’s storm cellar, the pair seek shelter in the house, where Dorothy is accidently hit on the head and knocked unconscious.  Upon awakening in a strange new world she is greeted by Glinda, the Witch of the North and discovers her house has inadvertently landed on and killed the Wicked Witch of the East.

Although she is a hero to the Munchkins, who have been released from the evil witches power, the Wicked Witch of the West appears to claim her sister’s magic ruby slippers only to discover that Glinda has already put them on Dorothy’s feet.  Furious, she vows to avenge her sister’s death and reclaim the slippers for herself.

Desperate to return home, Dorothy sets off to find the one man who can help her!  Along the way, she befriends and is joined by the Scarecrow, who wants a brain, the Tin Woodman, who desires a heart, and the Cowardly Lion, who is in need of courage.   The foursome head down the Yellow Brick Road on a journey to find The Wizard of Oz.

The Wizard of Oz is a 1939 American musical fantasy film based on the 1900 novel, The Wonderful Wizard of Oz, by L. Frank Baum.  The film stars Judy Garland as Dorothy Gale and is most notable for its use of fantasy storytelling, musical score, and unusual characters, and has become an icon of American popular culture. Nominated for six Academy Awards, the film was a box office disappointment on its initial release.  However, the 1956 broadcast television premiere of the film on CBS reintroduced the movie to the wider public and eventually made it one of the best known films in movie history.

Although there are two stage versions of the Wizard of Oz, the Piedmont Players version, which opens next Thursday night, is a more faithful adaptation of the film. A technically complex production including 3 giant projection screens, PPT’s final youth production of the season follows the dialogue and structure of the MGM classic; including iconic songs Over The Rainbow, Ding Dong! The Witch Is Dead, If I Only Had A Brain and We’re Off To See The Wizard.