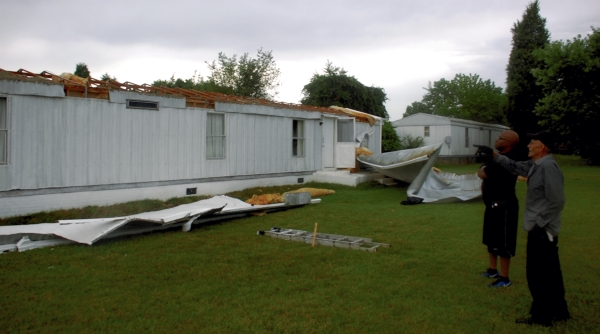 A tree missed a house at the corner of West Henderson and North Church streets during Tuesday’s storm, but it fell on power lines and forced the closure of Henderson Street in that block. High winds and hard rain associated with the storm led to reports of many trees across roads, on parts of houses and on power lines. Mark Wineka/Salisbury Post

SALISBURY — It was hot Tuesday, so Larry Jones not only had some fans going in his mobile home, he also had peeled down to his underwear just to keep cooler.

Jones was standing close to a window when an afternoon thunderstorm roared over his 1976 single-wide trailer on Harrison Road and ripped off the roof.

The roof came off the mobile home as though it had been peeled open by a giant can opener. The storm’s high winds carried some of the insulation that had been under the roof into a field across Harrison Road.

The storm seemed to pick out Jones’ residence on purpose. The mobile homes on both sides of his were not damaged.

Tuesday’s storm, which came through much of Rowan County in an east-west direction starting about 4 p.m., led to the loss of electricity for thousands of Rowan Countians as trees fell on power lines, across roads and onto houses.

As of 6:45 p.m. Tuesday,  close to 6,500 Duke Energy customers in the Salisbury area were without power. The towns of Spencer and Granite Quarry were hit hard. Spencer’s downtown was in the dark, as outages in eight different locations affected 1,065 customers.

In Granite Quarry, 15 different outages cut the power to 1.084 customers.

Just west of Salisbury in the Airport-Gaskey roads area and along Miller Chapel Road, eight outages affected 1,106 customers. In the Gold Hill vicinity, 779 customers lost their electricity after the storm.

Salisbury Police were out directing traffic through several busy intersections which lost their traffic lights, including Mahaley Avenue and West Innes Street, and Statesville Boulevard and Brenner Avenue.

On 11th Street in Salisbury near Richard Street, a large tree fell on the back corner of a rental house, damaging a porch and kitchen.

Part of the kitchen ceiling struck Melissa Cross on her back and shoulder. After the storm, Cross was standing on the sidewalk outside of the home as Salisbury firefighters cleared people away because of downed power lines.

April Hall, who rents the home, said she told everyone to run to the basement during the storm. Mikey Hall, her nephew, said the family was cooking in the kitchen when they heard “a big loud noise.”

“It was definitely strong,” forecaster and weather-spotter Steve Monday of Rowan County Weather said of the rain and wind Tuesday.

But it wasn’t strong enough to qualify for a severe thunderstorm warning, which requires winds that reach at least 58 mph, Monday said. The straight-line winds seemed to be strongest in Salisbury and east toward Granite Quarry, Monday added.

Monday was a little surprised there were no reports of hail with Tuesday’s storm because the weather models showed hail was possible.

According to emergency dispatches, some of the areas where trees and/or power lines were down included South Fulton Street, West Henderson Street, Mahaley Avenue, Sherrills Ford Road, East Ridge Road, Seventh Street in Spencer, and Airport and Gaskey roads.