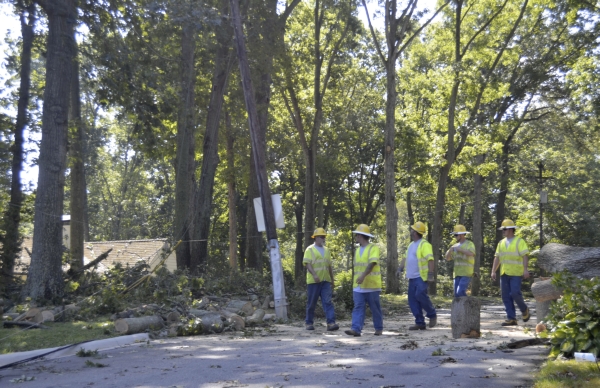 A crew with Utility Lines Construction Services was contracted through Duke Energy to help with the repair of downed power lines throughout Salisbury. This group walked the area of Dogwood Road in the Salisbury Country Club area to assess the damage. Shavonne Walker/Salisbury Post The utility pole was torn and parts of it came to rest on power lines on West Innes Street on Catawba College’s campus. Shavonne Walker/Salisbury Post

SALISBURY — Hours after a storm tore throughout Rowan County on Tuesday, the cleanup began for many in Salisbury and the surrounding areas. Some people are still without power.

Neighbors Lynn Bertram and husband and wife John and Denise Kyger spent the morning raking the yard and picking up limbs.

The storm hit their Country Club neighborhood hard, leaving several trees torn from their roots and utility poles ripped in half.

Bertram said she was told it would be Thursday around 10 a.m. before the neighborhood had electricity.

The three described a storm that included lots of rain and wind.

“It got instantly dark,” Bertram said.

Though destructive, the storm was very short, lasting about 30 minutes, Denise Kyger estimated. She said she could hear limbs breaking.

What was remarkable to Bertram was that, of the neighbors who reported damage, none of it included damage to their homes. The Kygers had walked the neighborhood to assess the damage earlier in the morning.

“We were fortunate,” John said.

Many of the residents in the area have generators, the trio said, purchased after an ice storm hit the area in 2002.

A spokesman with Utility Lines Construction Services said the company was contracted by Duke Energy to help meet the demand in Salisbury to restore power and repair utility poles.

About 60 workers traveled to Salisbury from different parts of the state, including Greensboro, to help.

On Wednesday morning, a crew began assessing an area along Dogwood Road where five poles were broken, causing power outages throughout the neighborhood.

Catawba College, another area hit by storm damage, had a number of limbs scattered throughout campus. Cars drove slowly down West Innes Street to avoid a power line dangling over the roadway. Part of a broken utility pole was anchored to a tree and balanced on the power line.

Likely the scariest of incidents occurred at the college when a gas leak was discovered while the downed tree in front of the administration building was being removed and cleared from the roadway, said Catawba College spokeswoman Tonia Black-Gold.

She said that, according to the college’s facilities and public safety, there was a fair amount of property damage. A large tree fell on three cars on the drive in front of the Omwake-Dearborn Chapel. Extensive debris is all over campus. In addition, college officials say it appears two solar panels may have been damaged. The power has since been restored.

Livingstone College officials say there was no major damage to any of the college’s structures, but there were tree limbs, leaves and other debris across campus.

Obama hits the campaign trail for Clinton in Charlotte

By Josh Bergeron josh.bergeron@salisburypost.com CHARLOTTE — In his first appearance on the 2016 presidential campaign trail, President Barack Obama on... read more