Obama hits the campaign trail for Clinton in Charlotte 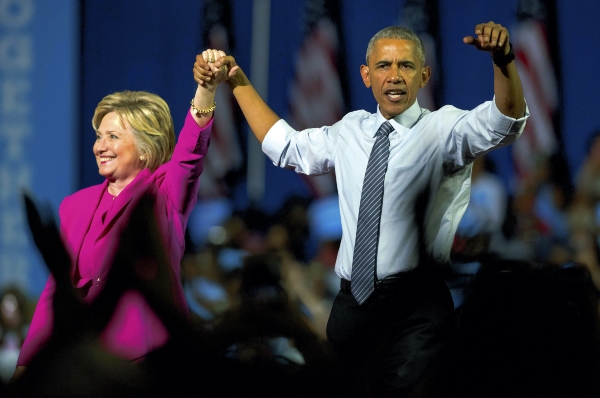 Democratic presidential candidate Hillary Clinton was joined on the podium by President Barack Obama during a campaign rally in Charlotte on Tuesday. Supporters waited hours in line for the chance to see Clinton and Obama at the Charlotte Convention Center. Jon C. Lakey/Salisbury Post

Obama appeared with Clinton at a campaign event in the Charlotte Convention Center. Thousands showed up to the event, waiting for hours in lines that stretched multiple blocks. A number of politicians for state and national office warmed up the crowd for Obama and Clinton. When it was time for the two headliners, attendees erupted in a raucous cheer that re-emerged periodically throughout the event.

For his part, Obama spent a large portion of time touting Clinton’s experience. She has served as the U.S. Secretary of State and a U.S. Senator. Obama and Clinton were also rivals during the 2008 presidential campaign.

“Sometimes we take somebody who has been in the trenches and fought the good fight and been steady for granted,” Obama said. “Sometimes we act as if never having done something and not knowing what you’re doing is a virtue. We don’t do that, by the way, for airline pilots. We don’t do that for surgeons.”

“Everybody can tweet, but nobody actually knows what it takes to do the job,” Obama said. “You can’t fully understand what it means to make life and death decisions until you’ve done it. That’s the truth. But, I can tell you this: Hillary Clinton has been tested.”

When he mentioned Trump’s idea to build a wall on the U.S.-Mexico border, the crowd booed loudly. Obama stopped the crowd and told them to vote instead. Booing is useless, he said.

During Obama’s criticism of Trump, he said the New York businessman’s comments are often unpredictable.

“Even the Republicans on the other side don’t know what the guy is talking about,” he said.

Although it was a Clinton campaign event, she talked relatively little compared to Obama. He admitted it was exciting to be back on the campaign trail.

“Hillary got me fired up,” Obama told the crowd shortly after being introduced.

Clinton’s event got a number of Rowan residents fired up, too. Mary James attended the event with a group of friends, including Nancy “Fle” Griffith, Sandra Phillis, Sarah Willis and Diane Jensen. James’ son Robyn James was also part of the group.

The group of friends said seeing Obama and Clinton together was an exciting experience. The group said seeing Obama’s first stop on the 2016 campaign trail was a primary reason they decided to travel to Charlotte.

“It’s a historic occasion to see the president and a potential president in one location,” Mary James said.

During Clinton’s brief speech, she mostly talked about Obama’s accomplishments while serving as president.

“Through it all, as we went from political rivals to partners to friends, my esteem for him just kept growing,” Clinton said.

When criticizing Trump, Clinton said he’s “unqualified and temperamentally unfit” to be president.

She only briefly outlined a few goals she intends to accomplish if she’s elected, including making community college free, increasing the federal minimum wage, strengthening already-in-place financial reforms and increasing taxes on the wealthy.

Obama did much of the talking for her. He framed Clinton as the only choice for middle-class, working families.

“So, if you vote for the other team, it’s not because of the economy,” Obama said.

Obama ran through a list of issues, criticizing Trump at every turn.

“If your concern is working people, then there is not a choice,” he said.

None of the people who spoke during Tuesday’s event, including Clinton and Obama, mentioned Clinton’s email scandal, which has dogged her campaign for months. Clinton used a private email server for government business. Just hours before the event, FBI Director James Comey said Clinton had used her private email servers to send classified and top secret information. However, Comey said he recommended that Clinton not be indicted.

For the Rowan County residents who attended Clinton’s campaign event, the emails weren’t a major negative factor. Steve Albanese called the email scandal a distraction from the real issues. Jeremy Gardner said the email scandal was a “waste of time.”

“I want to hear the issues on why Hillary or Trump should be president, not about emails that may have been deleted,” Gardner said.

Later, Gardner said he wished the speech would have included more substance and less “she’s the best” talk.

“But, to hear a president for the first time in my life, in my backyard, it was truly an amazing experience,” Gardner said.

Robyn James said he took a number of pictures during the event and was excited to post them on social media after he left the convention center.