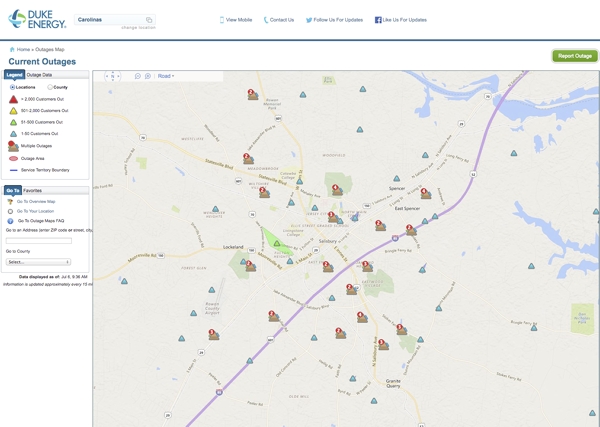 As of 10:00 p.m. on July 6, Duke Energy has completed restoration of all effected outages, including a separate outage in Spencer caused by this afternoon’s rain event.

The cooling station shelter opened at the Red Cross office, closed Wednesday at 7 p.m.  Station will not re-open unless additional  needs identified.

As of 3:45 p.m. on July 6, Duke Energy reported approximately 150 customers in Rowan County without power across 12 locations.  Work continues at a rapid pace by Duke Energy crews to restore power to remaining outage areas.  The estimated full restoration date/ time has been updated to today at 10 p.m.

The cooling station shelter opened at the Red Cross office, 1930 W Jake Alexander Blvd., Salisbury will close today at 7 p.m.  Additional evaluation will be made this evening regarding re-opening for July 7.

Sheltering questions may be directed to Rowan County Emergency Services at 704-216-8900.

Crews are working to restore power around Rowan County and a cooling shelter is open at the Red Cross for those who might need a break from the heat.

As of 10:30 a.m., Chief of Emergency Service Frank Thomason estimated about 1,100 people were still without power, particularly in the Catawba College, Eagle Heights, Ellis crossroads area, as well as Sherrill’s Ford Road.

“The remaining outages are scattered across Salisbury, a few have a couple hundred out, but most are small areas,” Thomason said.

Duke Energy has called in help from other counties and they will be working throughout the day.

“We’re still estimating 10 a.m. tomorrow for full restoration of power, and I mean all the little spots that just may have one line down.”

The Red Cross office on Jake Alexander Boulevard is open as a cooling station, says Heather LeMaster of the Red Cross. “We have water, coffee, snacks, just a place for people who may need a break from the heat” if their power is still out.

Thomason said if anyone needed to spend the night, arrangements will be made to house them. He said forecasts estimated today’s heat index at 95 degrees, lower than Tuesday’s 100 degree heat index.

“We’ll evaluate it throughout the day,” Thomason said.

Unfortunately, the phones are not working at the Red Cross due to an internet outage, but they have power and are open. Sheltering questions may be directed to Rowan County Emergency Services at 704-216-8900.

Thomason said the Department of Transportation and street crews were working to clear roadways. Some streets remain closed because of downed trees and power lines. “We need to coordinate to get the lines secured before street crews can remove the trees.”

“In fact, the storms didn’t have the criteria to even be called severe,” Thomason said. A line of storms moved from the Asheville area across the western counties with mostly just rain. When the line approached Rowan, “it spiraled up,” he said.

Emergency Management will continue to monitor the situation.