Friends flow in for Faith 4th 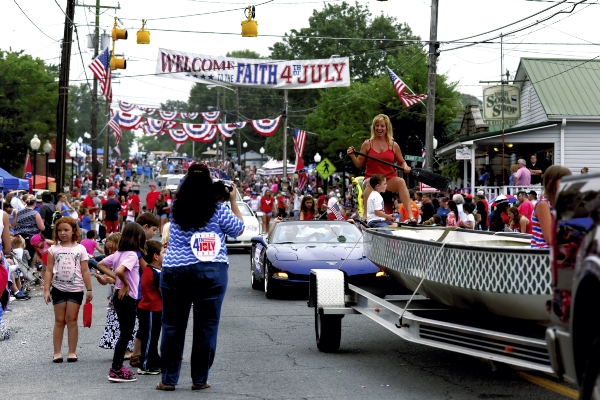 Ann Pressly rides on the Dragon Boat float in the Faith Fourth of July Parade. Photo by Jon Lakey/Salisbury Post

FAITH — You could hear the fire trucks before you saw them. The sirens blaring to life to announce the start of the Faith Fourth of July parade carried down Main Street, long before the flashing lights cut through the fog. A cloudy and cold morning may have dampened visibility, but it didn’t dampen spirits.

Rowan County residents turned out in force Monday morning, lining the streets of Faith and stacking five deep on sidewalks and lawns. If you want to get a good seat for the Faith Fourth Parade, you have to plan ahead.

Carole and Robert Hopkins parked their truck Sunday night in the parking lot of Faith Baptist Church. As excitement for the day begins to peak, just before the parade’s scheduled start time, the couple sits in the bed of the truck handing out free water bottles to passersby.

Carole said that the congregation of Faith Baptist decided to give out water, since the day is normally so hot. Monday may have been cooler than planned, but the Hopkins’s cooler was nearly empty 10 minutes to start time.

But water wasn’t the only thing Carole brought. She dug around in a bag in the truck bed and turned to her neighbor.

“You want a blueberry muffin?” she asked.

Carole said she and her husband have been coming to the Faith Fourth of July Parade since the 1950s. Back then, she said, most of the floats were drawn by tractors.

“They were probably horse drawn when you started coming,” Robert joked.

The Faith parade is a Hopkins family tradition, and the family always tries to make it — even when they no longer called Rowan County “home.” The Hopkinses lived out of state for nearly 30 years, and Carole said that when they could, they’d drive back to Faith just to see the parade.

Over the years the parade became more than just an event — it became a community. Carole said the same people come every year — locals and out-of-towners — and after a time she began looking forward to seeing the same familiar faces each year. Many people she sees or talks to only at the parade.

Her own family has grown up spending the Fourth of July in Faith. When her four boys were younger, Carole said the town used to let the teenagers sit on the roof of the fire department for a bird’s-eye-view. She recalled one year where her oldest son, Robert Jr., got sick while sitting on the roof, watching the parade.

“But the parade went on,” she said.

After the festivities they took him to the hospital, where he underwent surgery for appendicitis.

In 1992, the Hopkins drove out to East Rowan High School to watch President George H. Bush land in his helicopter, and they drove back to Faith to see him ride in the parade.

“That was exciting,” she said. “That was real exciting.”

Robert said he’s already looking forward to next year, and the soon-to-be 80 year-old plans to be there to see it.

“Every day is a blessing for us old timers,” he said.

This year, the parade was full of noise and cheer with Confederate soldiers giving gunpowder salutes, patriotic tunes played by the East Rowan Marching band and the Oasis Highlanders, clogging demonstrations, and a line of beauty queens from county American Legion posts. The town clapped and cheered each time a group of veterans drove past.

Other floats included appearances by Booger Woods and Reaper’s Realm, a towering, gas-powered shopping cart, a truck draped entirely in Confederate flags and caricatures of Hillary Clinton and Donald Trump listening to a sermon preached by representatives of Mount Hope Church.

After a line of deputies’ cars signaled the end of the parade, those still in a festive mood crossed the street to the fairgrounds or lingered in the Faith Soda Shop for lunch. Tuesday the fair will move on, and the town will begin to take down the streamers and flags, packing away the dreams of the Fourth of July until next year.

Riding Route 66: A glorious way to start the…