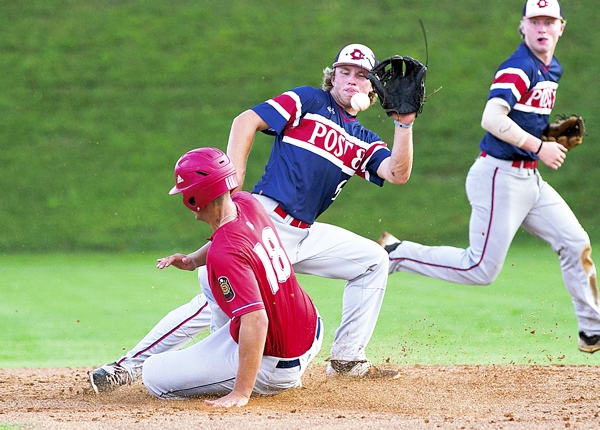 Rowan goes up 2-0 in series against Davidson County

LEXINGTON — The Davidson County Warriors have won one elimination game so far in the Area III American Legion baseball playoffs.

If they want to advance to the third round, they’ll need to win three do-or-die games.

Bryan Ketchie and Noah Gonzalez combined on a six-hitter as Rowan County handcuffed the Warriors, 5-1, on Tuesday at Holt-Moffitt Field to take a commanding 2-0 lead in their best-of-five second-round series.

“You’ve got to suck it up and want to win, want to keep playing and not pack the bags,” said Post 8 coach Dan Tricarico. “It’s been a long summer. Some of these guys have been playing baseball since February. Hopefully, we’ll go down there, give it our best shot and extend the season.”

“Our starting pitcher did a good job,” said Rowan coach Jim Gantt. “He put the ball in play. He got to 99 pitches and we had to move on. Gonzalez came in and did a good job. That’s a good-hitting ball club. We were fortunate.”

The Warriors weren’t so fortunate in the third inning — in either half — where most of the action took place.

Rowan had taken a 1-0 lead in the first on Hunter Shepherd’s run-scoring double off Post 8 starter Noah Jarrett. It stayed that way until the fateful third.

A walk to Shepherd and singles by Juan Garcia and Brandon White made it a 2-0 game. The Warriors were able to throw Garcia out at the plate on Jake Pritchard’s single but Walton scored when first baseman Cole Beeker booted Dalton Lankford’s grounder. Tanner File followed with a two-run bloop single that right fielder Michael Johnson just missed catching.

Suddenly, it was a 5-0 game and Rowan was in control.

The Warriors bunched four of their hits off Ketchie in the bottom of the inning on Beeker’s RBI single. But Cole Tysinger was picked off after opening the frame with a single, possibly short-circuiting a big inning.

“Yeah, the pickoff helped,” Gantt said. “That’s for sure. We had the top of the order coming back up. We were fortunate there.”

That was it for the Warriors, who were shut down the rest of the game.

“Their first pitcher did a really good job,” Tricarico said. “He kept us off balance.”

A bright spot for the Warriors was Will Lancaster throwing six innings of one-hit relief. Lancaster came on after Jarrett hit Lee Poteat to lead off the fourth. At one point, Lancaster retired 13 in a row before Garcia doubled with two out in the ninth. The Lexington left-hander struck out three and walked three.