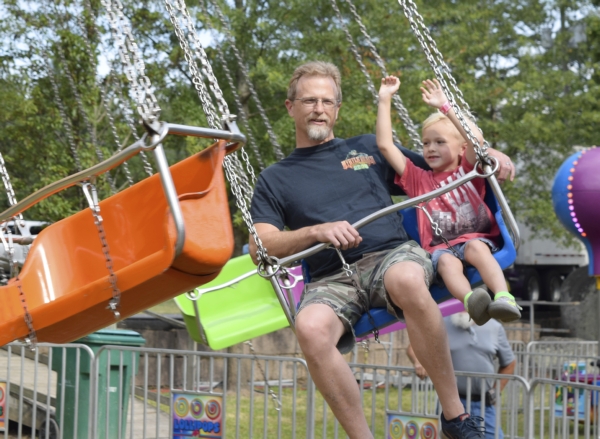 Tim, left, and Teagan, right, Garver wait for a ride to start at the 2016 Faith Fourth of July celebration. Tim said that to him, patriotism means standing up for what you believe to be right. Rebecca Rider/Salisbury Post

What does patriotism mean to you?

FAITH — If you walk the streets of Faith the day before the Fourth of July and ask festival-goers what the word “patriotism” means to them, you’ll get a lot of answers. But for many who wandered the grounds of the Faith fair Sunday afternoon, today’s holiday carries a heavy weight. Some, like Jolene Houchins, are remembering those who fought and died for their country, and those who are still serving.

“Because if it wasn’t for them we wouldn’t have our freedom today,” she said. “Our freedom is founded by them.”

Houchins sits in the shade cast by the Hoff’s Grill booth, her shirt proudly proclaiming “USA.” She and her husband have two sons in the military, she said — one in the Navy and one in the Marines, and she couldn’t be more proud.

For Rick Thomas, pastor of Saint Mark’s Lutheran Church, the Fourth of July means remembering that he stepped up to the plate in 1966 to serve his country in Vietnam. They’re not happy memories, but Thomas said he felt it was important to protect “what God has given us.”

“I went and fought for my country and I’d do it again,” he said.

But Cheryl and Albert York feel that the day has lost some of its emotional depth.

While the York family came to the fair Sunday evening so that their gaggle of grandchildren could enjoy the festivities, Cheryl said she feels like people today focus more on the celebration itself rather than what it stands for.

“I just wish it was simple,” she said.

And the Yorks know something about patriotism. They’re directly related to the famous Sgt. Alvin York, who was one of the most decorated U.S. soldiers serving in World War I. Michael recalls, jokingly, that the connection got him out of a ticket in Summersville, Ky., once.

Because of his family’s legacy — most of the Yorks have served in the military, he said – the day is about the men and women who serve their country.

“Hats off, cause it ain’t getting any easier for them,” he said.

And it’s also about “God and country.” Regardless of the choices the nation makes, York said he trusts God to “direct us where we need to be.”

But others weren’t so sure. Tricia Garver said she felt that the country had lost many of the freedoms it once possessed.

“I feel like our rights have been stripped away and our mouths have been taped over,” she said.

Husband Tim Garver had a different take on the meaning of patriotism.

“Without being political, I think it means standing up for what’s right even when the government tells you it’s wrong,” he said.

But others were more hopeful.

“To me it’s just like a great celebration,” Albert Stover said.

Stover spent the afternoon walking the fairgrounds with his fiancé, and said that the Fourth of July was a chance to look back at how far the nation had come, and how much progress had been made to mend gaps and bridges — particularly racial divides.

Riding Route 66: Rolling into Texas for some Elvis pie