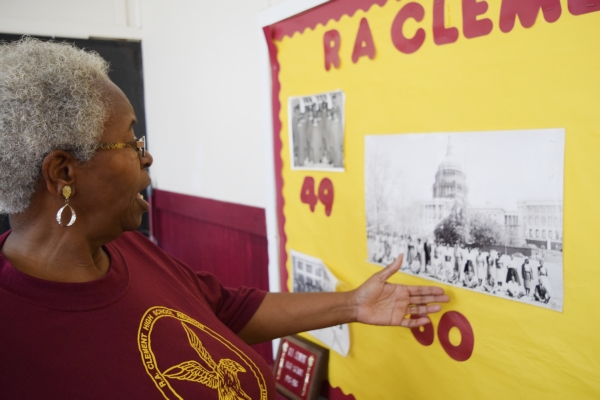 Catrelia Hunter graduated from R.A. Clement in 1963. At the alumni association's 21st reunion on Saturday, she found a photo of herself on a school visit to Washington, D.C. Hunter was in the 8th grade at the time. "It was a gem, just a gem of an experience," she remembered. Rebecca Rider/Salisbury Post

CLEVELAND — The grounds of the R.A. Clement Rosenwald School are quiet, tucked away in the curve of Cleveland’s Krider Street, right next to a community park. For nearly a decade, former students have worked to restore the old building for use as a community center, and it’s easy to see how far they’ve come, looking at the fresh paint, new glass and scrubbed brick of the main building.

Inside, the atmosphere is warm. Old classmates exchange hugs and stories as window air conditioning units work to keep out the July heat. Saturday was the 21st reunion picnic of the school’s alumni association, and the first time the renovated building was opened to the public.

“So this is a very special day for us,” Catrelia Hunter, secretary of the alumni association, said.

The R.A. Clement Rosenwald School was built in 1929 to serve the black Cleveland community in the era of segregation. When the school closed in 1968, it was purchased a year later by a group of citizens with connections to the school and served as a community center for many years before it was vacated.

Now, the alumni association is trying to get the building back on its feet. Since 2003, those with connections to the school have been working hard, stabilizing the roof and cleaning up the old hardwood floors until they gleam. They’ve got about half of the H-shaped building up and ready to go, with plans to transform the other end into a kitchen and a history room.

Ask any one of alumni, dressed proudly in maroon and gold, about the school and they’ll point – here was second grade, first grade classes were taught in that back corner, fourth and fifth grade were across the hall. And the fingerprints of those early lessons still linger in their memories.

Charles Knox graduated from the school in 1967, and said he still remembers Friday assemblies, where students were encouraged to stay in school. For Knox, that message “carried through,” and he went on to become the first person in his family to earn a college degree.

Even after he left, he stayed in touch with teachers and fellow classmates — many of whom he saw in church. Knox remembers that one of his teachers taught him piano, later on.

“Everything was just a huge community,” he said.

She said she could vividly remember the walk from the R.A. Clement school up the road to the junior high’s cafeteria for lunches – in the heat, in the rain, in the snow.

“But we enjoyed ourselves,” she remembered. “We skipped and sang as we walked along.”

But what left the deepest impression on her were the teachers. Snipes said that they were kind and caring, often providing school supplies or other necessities out of their own pockets.

“Whatever we didn’t have, they got it for us,” she said. “It didn’t matter what it was.”

“It was — it was a community,” Sharon Avery Davis said.

“When you talk to someone, look them directly in their face because you have nothing to be ashamed of,” Knox told students.

When Leonard Hall, treasurer of the alumni association, walks through the building, he points out the past, but he’s imagining the future. In each room, he describes the hopes and dreams of everyone who’s poured into the old Clement school over the past ten years.

The back room, filled with old tables and wooden beams, will be a place to celebrate the school’s history. The old library, with dusty schoolbooks still on the shelves, will become one again. The corner room with closed up windows and old chalkboards will be a kitchen to help support community events.

The possibilities are endless. Next, Snider said the school needs an HVAC system. And if they can acquire and install some technology, the group hopes to begin hosting summer camps with a focus on science, technology, engineering and math.

In the meantime, past graduates and students will gather to celebrate — to laugh, share stories and remember.

“These were really some precious, precious moments that we spent here,” Hunter said.