GARS is more than just a golf outing 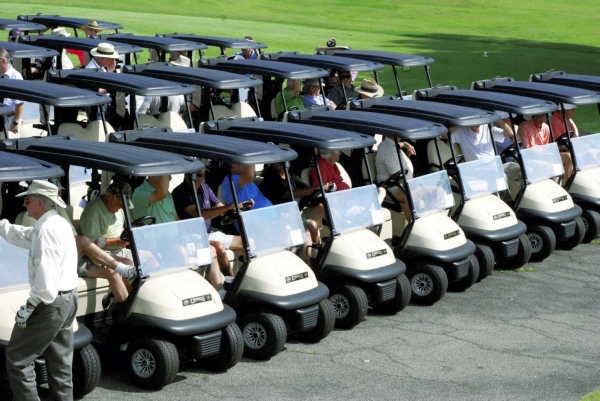 Dennis Davidson/Salisbury Post The GARS members are in their carts and ready to start their weekly Monday event, this one a captain’s choice tournament at Corbin Hills Golf Club on June 6. The organization, founded in 1988, has 121 members this year.

SALISBURY — The 30-plus golf carts roll out of the Corbin Hills parking lot, heading for another 18 holes of the beautiful game. It’s a scene that has played out most Monday mornings for the past 28 years.

The GARS — Golf Association of Rowan Seniors — meet for an golf outing most every week. Now 121-strong, the organization has been around since 1988, when it began with 99 members and 35 playing dates.

“We are chartered through the Rufty-Holmes Senior Center, and started the same year,” said Gwyn Huie, a member since 1999 and the current historian chairman.

The group rotates its play at most of the county’s public courses and ventures to Lexington as well, but there is one stipulation: Members must be Rowan County residents.

In 2015, GARS members combined for 2,115 rounds at Warrior Golf Club, Corbin Hills, Crescent, Rolling Hills, McCanless and Lexington Municipal. The group plays every Monday, weather permitting, even in the winter.

And while the “G” in GARS stands for golf, the association is a lot more that a game with a little white ball. For a lot of its members, it a sense of belonging, a social outlet. Huie says the group has always wanted to stress that it’s about more than golf.

Many members have benefited from the friendships they’ve made over the years, including just being “looked after,” if they have reached an age or a period of declining health in their lives when they don’t play golf any more.

“Some are not able to play anymore, but still want to be members,” said Huie. “If a person gets sick or needs a ride to the doctor, things like that, we’re there to help. One time, a member took a GAR to the doctor, his wife to the beauty shop, went back and picked them both up, took them to lunch, and then took them home. We want to help each other as much as we can. It’s more than just an outing of golf.”

Sometimes, it’s just the sharing of information, whether it’s at the monthly business meeting on at a golf course.

For example, one member who was battling cancer, did not realize that he was eligible for care at the VA Medical Center because he had been in the military for just three weeks due to an injury.

“We found out that, during the Vietnam era,  if you were in the military for just one day, you qualify for benefits,” said Huie. “We got him in and it really helped with his care and medicine costs. And the good news is that he is now cancer-free.”

Another key point to the GARS in that it is not only for men. Both Huie and current president O.J. Chandler, celebrating his 87th birthday today, say that the group extendss an open invitation to anyone, male or female.

“All of our activities are moving forward, but we want some more community activity, particularly, we’d like to get more women involved in our organization,” said Chandler, one of several GARS who sometimes shoots his age on the golf course. “We’re really  hoping to do this. The only thing the women have to do is the same thing the men have to do — be 55 years old and a resident of Rowan County. We would very much like to see more women join us.”

Dues for members are just $40 per year and it covers refreshments at meetings, several breakfasts and an annual Christmas party, which includes a spouse or guest.

“We’re non-profit, so all of the dues go back into paying for the gatherings,” added Huie. “And we have an additional sickness fund which members can contribute to if they wish. We send flowers if a member or spouse is in the hospital and in the case of a death, we make a donation to the Rufty-Holmes Senior Center in their memory.”

Most golf courses give the GARS a discounted rate and why wouldn’t they? The group is bringing the course 70-80 players on what normally would be a slow Monday morning.

Huie added that the majority rules on which courses to play and the golf format each week, which may foursomes or captain’s choice. “You’re not going to please everybody in any group all the time, but all you can do is be fair and let members vote on things,” he said.

Chandler noted that the organization is a great cross-section of Rowan County. “Every occupation and vocation you can think of, is a part of this group and the thing I can’t emphasize enough, is that we are trying build up the female contingent in this group,” said Chandler, who also served as president 20 years ago.

“Yes, it’s my second time as president,” explained Chandler, who retired here after a career with Rockwell International in California. “I figure it’s my last year that I can be active, so I wanted to do it again — with everything I’ve got. We’ve we put together a very good board of directors this year.”

According the GARS’ history information, the idea for the association came out of a meeting at the Holiday Inn on Aug. 6, 1986. The meeting was for Rowan residents who were interested in a senior center. While attending the meeting, Walter Adams began thinking of a club for senior golfers.

Awareness of a possible golf group spread during 1987, mostly through word of mouth. Finally, on March 22, 1988, an organizational meeting for the club was held for those interested at the newly-opened Rufty-Holmes Senior Center.

At total of 44 senior golfers joined the club that day as charter members, and the club was named the Golf Association of Rowan Seniors. Adams was given credit with coming up with the name, which is now more commonly called by its acronym, the GARS.

Adams was very active in GARS, holding numerous offices, until his death in 2005.

Huie acknowledged that Rick Eldridge, Rufty-Holmes Senior Center director, has provided invaluable support to the GARS from its formation in 1988.

Huie said he joined GARS in 1999 because he had retired the year before from U.S. Airways and his wife, Maxine, told him to find a hobby.

The couple had moved to Salisbury in 1988 because U.S. Airways had transferred him to Charlotte and Maxine was a teacher in Davidson County. Salisbury was the midway point.

“We like Salisbury, it’s a good place to live” said Huie. “And belonging to a group like GARS makes it even better.”