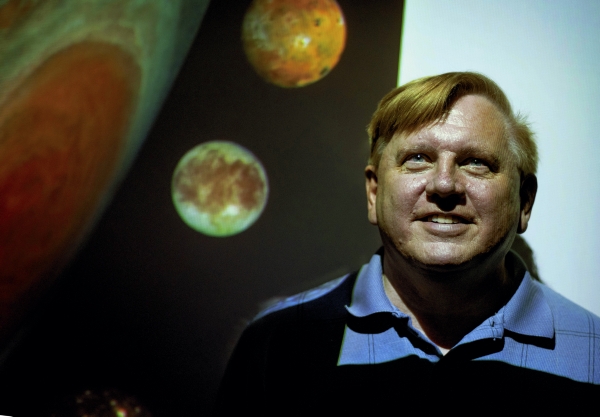 JON C. LAKEY / SALISBURY POST Jack Howard recently retired as longtime Rowan Cabarrus Community College astronomy instructor. Howard is excited and has been following the NASA Juno spacecraft misson which launched in 2011 and is scheduled to enter orbit around the largest planet in the solar system on Monday July 4th. Photo taken on Friday, July 1, 2016, in Kannapolis, N.C.

SALISBURY — For space enthusiasts, 1957 was a good year. It was the year Sputnik launched, and it was also the year that Jack Howard bought his first telescope. It was the year he fell in love with space.

And it was prime-time for anyone who had an inkling of interest in the final frontier. The establishment of NASA, the space race, the first orbit of the planet, the lunar landing — Howard remembers them all. And it sparked something.

“If you have a natural interest in astronomy, it just builds,” he said, recalling those early days.

Now, Howard volunteers as a representative for NASA – though getting there was a convoluted path. While he never lost his passion for astronomy, a bad job market in the ’70s forced him into the business sector.

Twenty years later, he finally found his way back as a professor of physics and astronomy at Rowan-Cabarrus Community College. During his tenure there, he helped start one of the largest community college astronomy programs in the state.

For Howard, teaching wasn’t all about giving lectures in front of a classroom — he said his favorite moments as a teacher were when students asked him questions he didn’t know the answers to.

“I have to go dig up an answer and learn something,” he said.

His students were interested, curious and passionate — Howard said astronomy does that to people.

“It’s one science that appeals to about everyone,” he said.

He used to tell students that astronomy was “the only science that you go home, go out in your backyard and there it is.”

Last year, Howard was giving a presentation to an astronomy club in Charlotte on the New Horizons space probe when someone asked if he’d heard of Solar System Ambassadors.

The ambassadors program is a public outreach initiative born of a partnership between NASA and the Jet Propulsion Laboratory. Volunteers from all over the country apply, and if accepted, serve as astronomical speakers and educators in their area. According the the program’s website, there are about 700 Solar System Ambassadors nationwide.

His interest piqued, Howard applied to the program. Now he serves as the only ambassador in the Charlotte area.

Until January rolls around, Howard is available to give talks or presentations about any and all things space related. Whether it’s the latest news on the Juno probe, or an explanation of variable stars. He’ll talk to anyone – from astronomy clubs to Boy Scout troops to classrooms.

He can reapply for the program after his one-year term is up, and said that he plans to. He also plans to return to Rowan-Cabarrus as an adjunct astronomy professor. Because when it comes to space, he could talk forever. It’s one thing he loves about astronomy — it’s always changing. He remembers vividly a study he did as a graduate student on a variable star. A year later, someone came along with better data and overturned part of Howard’s work — but that’s just how it goes.

“You chip in some bit of knowledge and see where you go with it,” he said.

All Solar System Ambassador programs are free. Those interested in having Howard speak should visit http://solarsystem.nasa.gov/ssa/home.cfm and contact him through the site’s directory.

Riding Route 66: Just having a ball