The Fourth is for families: Faith Fourth of July celebration kicks off 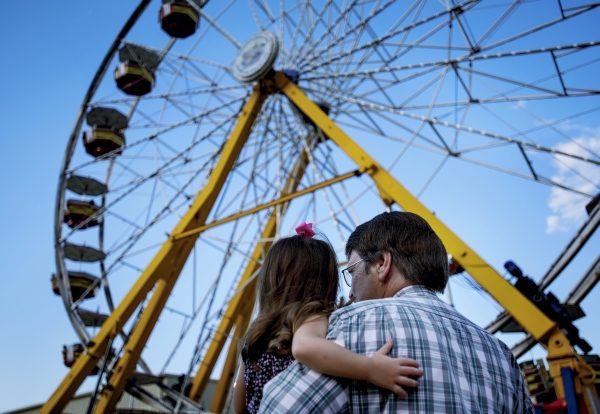 FAITH — The rain came in an hour before the opening of the Faith Fourth of July celebration. The brief, heavy shower left puddles in the gravel walkway and made the air hang with humidity.

But by 6 p.m., when the rides opened their gates and fair workers began calling out from game booths, the town turned out.

Charlie Bulla held the hand of his grandson, Bentlee Shoaf, and steered him around puddles. Bentlee turned 1 just a few weeks ago, but he walks through the Faith fair like he was born there – and in a way, it’s in his blood.

Bulla has been coming to the Faith fair for 40 years. He said it doesn’t change much.

“Same people, just about,” he said, “They just get a little older.”

His kids grew up coming every summer, and now it’s time to bring his grandkids – Bulla said he’s got eight of them. He looked down to where Bentlee clung to his hand, and said he hoped his family will be going to the fair for years to come.

The Faith Fourth of July Celebration started in 1946 as a picnic at the local ballpark and is run by the dedicated collaboration between the Faith branches of the Civitans, Jaycees, American Legion and American Legion Auxiliary. This is its 70th year, and the fair has grown, sprawling over the grounds of Faith Elementary School and a local park.

Randall Barger, one of the Civitans who serves on the Faith Fourth committee, said the nearly week-long celebration builds up the excitement until it bursts at the holiday parade.

But the fair was cut shorter than usual this year. In previous years, the rides and festivities have spun out for a full nine days, but Barger said that this year it was cut down to six to accommodate the ride company, Wade Shows, Inc., which drove in from Tennessee just a few days ago.

But the short schedule hasn’t dimmed spirits. Barger has been working with the celebration since 1975, and he and others of the town have woven the fair into the fabric of their lives. The fair committee meets year round, and when it comes to favorites, most people at the celebration’s opening night had difficulty picking out a single thing.

And slowly, it’s becoming a tradition for new families, as well. It’s the third year at the fair for Katie Caswell and son Daylen, 4. Caswell fell in love with the fair after she moved to Rockwell.

Now, Caswell lives in Archdale, but she said even though the town has its own fair, she’ll keep coming to Faith’s.

“This is one of the best fairs I’ve been to,” she said.

Patty Bost staggered off a spinning ride known as the “Sizzler,” clutching the hand of 9-year-old Zoe Bull.

“It’s been a long time since I’ve done that!” She said.

Zoe is the granddaughter of Bost’s best friend, who had to work Wednesday evening.

Bost has been coming for years, but it’s Zoe’s first time at the celebration – and Bost said she knew Zoe would love it. But it’s something she enjoys, as well.

“You’re never too old to come out and enjoy this,” she said.

It’s a statement that proved true for Corrine and Bobby Trexler. Corrine is a Salisbury resident, said she’s been coming to the fair longer than she can remember.

When she was younger, she loved to hop on the rides and go for a spin, but now she likes to listen to the band. But before the festivities started, she and Bobby wander the fair, hand-in-hand. For the next six days, they’ll be here, watching the night’s entertainment and taking in the sights.