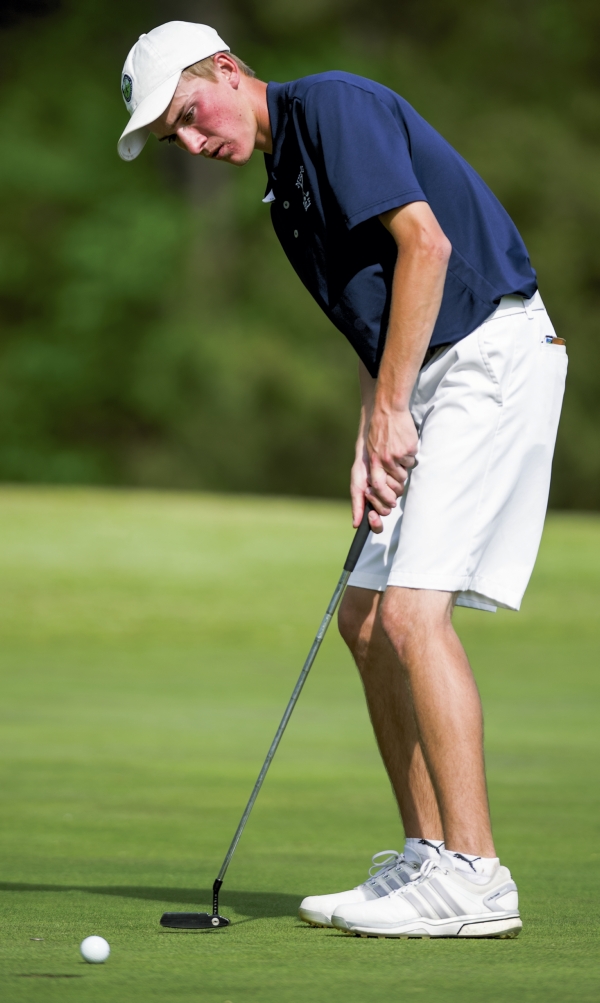 Shuping finished tied for sixth place. The top 15 players and ties qualified for the 102nd Carolinas Amateur Championship, scheduled for July 14-17, at the Country Club of Charleston.

There was also a sectional qualifier on Thursday at Wescott Golf Club (Burn-Black) in Summerville, S.C.

During his round, Shuping had an eagle and a birdie to offset two bogeys and he had pars on the other 14 holes.

Shuping, who was the Salisbury Post’s co-player of the year for the recent high school season, won the county meet in April at Warrior Golf Club. He will continue his education and golf career this fall at East Carolina University.

Shuping’s eagle on Thursday basically clinched his spot in the top 15, but it was not without risk.

He was one-over par after 16 holes and figured that even par for the day would probably make the cut. So he was definitely looking for at least a birdie on the short (470 yards) par-5 17th.

Shuping didn’t have his best drive on the hole and needed a long iron for his second shot.

“It’s a short par-5, but there’s water, short and right, near the green,” said Shuping. “It’s sort of an intimidating second shot, but I knew I couldn’t really afford to lay up, so I went for it.”

Shuping hit a 4-iron to within seven feet and made the eagle putt to suddenly go to 1-under par for the round. He made a par on the final hole for his 70.

Shuping’s other birdie came on No. 12, a short par-4. “Some people try to drive the green, but I went iron and wedge,” he recalled. “I got it in there to within eight feet and made the putt.”

According to Shuping, he was “scrambling” for the first 10 holes on Thursday, only saving the day with good chipping and putting.

He was one-over on the front, saving par eight times. After the birdie on No. 12 got him back to even par, Shuping bogeyed No. 15, a long par-3. Then came the success on 17.

“It was all about chipping and putting today (Thursday),” said Shuping. “I was very comfortable putting in the eight-foot range. I got up and down a lot and saved a lot of pars. That got me in position to make those shots on No. 17 and I made another eight to nine-foot putt on No. 18.”

Shuping said that he was proud to be going to Charleston as the tournament is not a junior event. In Clayton, he defeated a lot of college players and seasoned amateurs.

“Yes, I’ve ventured away from junior golf,” said Shuping. “I’m moving into a different time of my life and trying to get ready for college golf.”

Next week, Shuping will compete in the Eastern Amateur in Portsmouth, Va., a four-day, Thursday-Sunday event for those making the cut on Friday.

The Country Club of Charleston has played host to six previous Carolinas Amateurs, dating back to 1911. The most recent time the event was held at at Charleston, a Seth Raynor-designed course, was 2009, when Jack Fields of Southern Pines won the title.

The 2009 event was the last year that it structured as match play. It is now a 72-hole stroke-play competition.

NOTES: Shuping said that a family golf vacation to Pebble Beach in California is on the horizon for early August. … He was also excited about local teens Nick Lyerly and Michael Childress qualifying for the U.S. Junior Amateur on Wednesday. “That’s huge,” said Shuping. “Michael and Nick are representing Salisbury big time.”

Sectional qualifying results of the 102nd Carolinas Amateur Championship hosted by Pine Hollow Golf Club in Clayton, N.C., Thursday. All below made cut and advance to the championship, July 14-17.