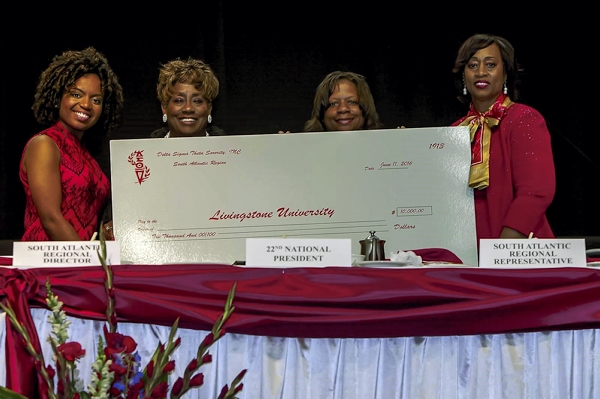 VIRGINIA BEACH, Va. – Livingstone College was among three Historically Black Colleges and Universities to be awarded $10,000 from the South Atlantic Region of Delta Sigma Theta Sorority, Inc. earlier this month.

The money was awarded during a luncheon at the sorority’s 27th South Atlantic Regional Conference, held June 9-12 at the Virginia Beach Convention Center. Sorority officials chose one HBCU from each of the states in their region to award. Joining Livingstone were Virginia Union University and South Carolina State University.

Boyd pulled no punches in telling the delegates they must continue speaking up and speaking out about injustices.

African-Americans will continue making a difference in the United States, in large part because of historically black colleges and universities, Boyd said.

“If it had not been for that HBCU from where you graduated the one that gave you a chance, where would you be today?” she asked to loud applause. “All three African-American surgeon generals graduated from HBCUs. David Satcher went to Morehouse, and our sorors Regina M. Benjamin and Jocelyn Elder went to Xavier University and Philander Smith College, respectively. There are so many who owe their lives to HBCUs and the quality education they received. Now is the time for standing up for our HBCUs at a time when we need you the most.”

Boyd has a bachelor’s degree in mathematics, with a minor in physics and music, from Alabama State University, an HBCU. She’s the first African-American woman to earn a master’s degree in mechanical engineering from Yale University, and she holds a Master of Divinity and a Doctor of Ministry from Howard University in Washington, D.C., also an HBCU.

She referenced police brutality, voting rights, cradle to prison pipeline and other issues African-Americans must speak out against.

Boyd’s fiery speech was peppered with applause and shouts of “amen.” By the time she finished, the more than 1,200 people assembled at the luncheon were on their feet.

Livingstone College President Dr. Jimmy R. Jenkins, Sr. expressed extreme gratitude to Delta Sigma Theta for acknowledging the institution at which he has served as president for 10 years.

“I cannot thank the women of Delta Sigma Theta enough for selecting Livingstone College as their North Carolina HBCU recipient,” Jenkins said. “We’re in the midst of a $25 million Campaign for Excellence to raise money for our endowment, student scholarships, capital improvements and faculty and staff development, so their donation couldn’t have come at a more apropos time. The entire Livingstone College Family is grateful to Andria Jeffries, Dr. Paulette C. Walker and Deltas everywhere for this very generous gift that’s much-needed and will be put to excellent use.”