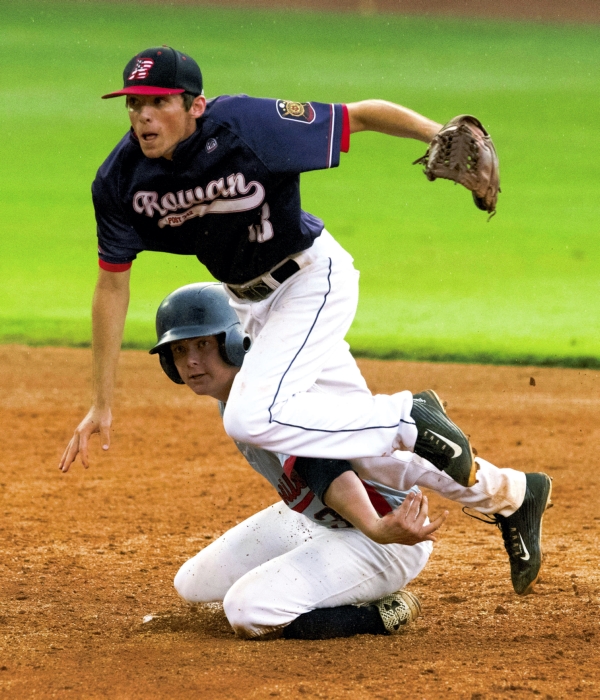 Staff report
SALISBURY — John Owen pitched eight strong innings in his longest, strongest outing of the summer, and Brandon Walton came through with three hits and a key defensive play as Rowan County rolled, 11-4, at Kannapolis on Thursday.
Owen, a rising senior at East Rowan, got 19 outs on groundballs, including two when Walton started a 5-4-3 double play on a hot smash in the fourth inning — when Kannapolis still had a chance. Owen only struck out two, but he didn’t walk a batter. He allowed two earned runs. Kannapolis tacked on its final two runs in the eighth following a two-out error.
Noah Gonzalez pitched the ninth for Rowan.
It was the regular-season finale for both teams. Rowan (21-8, 9-1) won the Southern Division of Area III with a four-game cushion. Kannapolis, Mocksville and Concord, the only team to beat Rowan in divisional play, tied for second with 5-5 records.
When Kannapolis (7-12 overall) took on Rowan, it was playing its second game on Thursday. Kannapolis beat Stanly, 7-2, in an afternoon contest.
Hunter Shepherd stayed hot with a first-inning RBI-single off Kannapolis starter Jacob Tuttle for a 1-0 Rowan lead.
The big inning for Rowan was a four-run third that made it 5-0. Walton had a two-run double for the big blow of the inning, and Lee Poteat and Seth Cauble contributed RBI singles.
Owen breezed through the first three innings, but Kannapolis got on the board in the fourth on solid hits by Mark Perkins and Bo Corriher.
Shepherd doubled leading off the fifth and eventually scored on a double-play bouncer to push the lead to 6-1.
Blake Johnson’s double and a single by Chandler Hubbard pulled Kannapolis within 6-2 in the bottom of the fifth.
Rowan showed patience facing reliever Matt Baucom in the sixth and put the game away with bases on balls. Free passes to Shepherd and Walton and a single by Jake Pritchard loaded the bases. Trevor Atwood and Dalton Lankford accepted run-scoring walks to make it 8-2, and it was 9-2 when a run scored on Tanner File’s foul sacrifice fly to deep right.
Rowan got two more runs in the eighth. Pritchard’s opposite-field double was the key hit, and Atwood picked up his second RBI. Kannapolis right fielder Hunter Travis threw out a runner at the plate to end the inning.
Kannapolis took advantage of two errors to plate two in the bottom of the eighth. Corriher and Cody Smith had solid hits in the inning.
Rowan made another error in the ninth, but Gonzalez wrapped up the victory. Rowan has won three in a row and 11 of its last 12.
Rowan pounded 15 hits and scored double-figure runs for the 12th time.
***
NOTES: Kannapolis honored its 1952 state champs, the third of the program’s four championship teams (1946, 1947, 1961), prior to the game. … Rowan third baseman Juan Garcia was a late scratch from the lineup. Walton played third base, with Atwood serving as the DH. … South Rowan High grads Blake Johnson and Bo Corriher had doubles for Kannapolis. Kannapolis should host a first-round playoff game tonight. Rowan will enjoy a first-round bye and will be at home on July 4 to open the second round.

Childress and Lyerly tie for first, qualify for US…