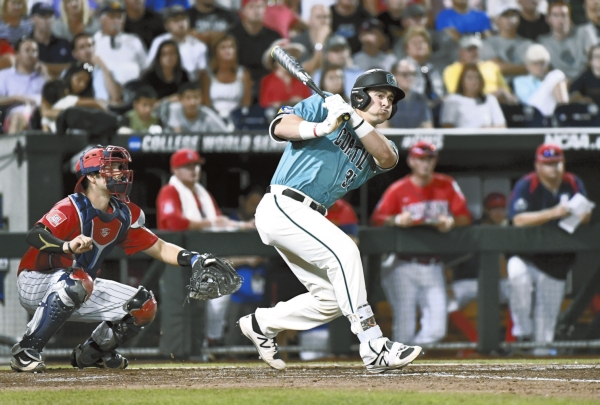 Mike Morrison was sensational in his first start of the season, helping the Chanticleers rebound from a 3-0 loss to the Wildcats in the opener. The teams meet again Wednesday night to decide the national championship.

Owings was batting .125 (3 for 24) in the CWS when he stepped to the plate against Cameron Ming in the eighth. The Big South player of the year fought off a high inside pitch, sending it into short left field to drive in Anthony Marks from second base with the go-ahead run.

After Zach Remillard chased Ming (3-3) with a double, G.K. Young followed with a two-run single off Alfonso Rivas to give the Chanticleers a three-run lead.

Arizona (49-23) made it a one-run game in the bottom half after Bobby Holmes (7-2) walked two straight to load the bases with none out. One run came home on Justin Behnke’s groundout, and another scored when shortstop Michael Paez bobbled Louis Boyd’s routine grounder.

With Coastal Carolina (54-18) running low on pitching, coach Gary Gilmore turned to his senior closer to start a game for the third time in his career. Morrison responded with career highs of 6 2/3 innings, 103 pitches and 10 strikeouts. He allowed six hits and two runs.

Arizona starter Kevin Ginkel was just as good, striking out a career-high 10 in seven innings. He allowed two runs and five hits.

The Chanticleers took the lead in the third after shortstop Boyd lost track of David Parrett’s popup in the outfield grass. Parrett ended up at second base on the Wildcats’ second error in seven CWS games and Billy Cooke stayed at third. Marks then singled up the middle for a 2-1 lead.

Ryan Aguilar’s RBI groundout tied it in the fifth for Arizona.

Coastal Carolina improved to 50-1 when leading after eight innings, but things got stressful as Holmes struggled with his command. But he finished with a perfect ninth.