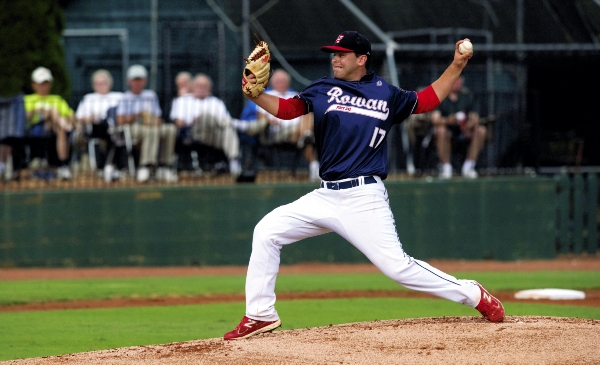 SALISBURY — Hunter Shepherd had gone two weeks without a homer, but the three-run screamer that he scalded over the right-field wall at Newman Park on Wednesday night ended his drought.
Shepherd’s fifth homer of the summer turned a tense, 3-1, game into a 6-1 cruise, and Rowan went on to a 10-1 victory against Mocksville.
“I wasn’t just due, I was over-due,” the lefty slugger said with a smile. “I had a simple approach — find a good pitch to hit. It worked out.”
It worked out all night for Shepherd, who had a sacrifice fly in the first inning and a run-scoring double in the third before his home run. After the homer, he had a run-scoring single in the sixth and a leadoff double in the eighth. He went 4-for-4 with six RBIs. For the season, Shepherd, a homeschooler who signed with Catawba, is batting .377 with a team-leading 43 RBIs.
“Hunter had some very good at-bats,” said Rowan coach Jim Gantt said. “The best one might’ve been in the eighth when he fought off a bunch of good pitches, and then hit that double to left-center.”
Rowan (20-8, 8-1) reached the 20-win club for the 11th straight season under Gantt. Rowan was 19-8 in 2005, the last time it failed to win 20.
Rowan’s defense also had a sharp night, as shortstop Dalton Lankford and second baseman Tanner File turned in some of their best plays of the summer. File was tough on double plays that Rowan turned in the second and the fifth. Lankford made a spinning play on a ball hit up the middle in the seventh, and he added a nice, charging play in the ninth.
“He made two of the toughest plays that a shortstop can make,” Gantt said.
The beneficiary of all that offense and defense was left-hander Brandon White, who worked six innings and bumped his record to 5-0. White also won four of his last five decisions at North Rowan High, so he’s been on a roll.
“I got ahead of hitters and the guys got me that 3-0 lead early and that made it a lot easier,” White said. “Our outfielders were running balls down, the way they always do, and I was just filling up the strike zone.”
White, a Belmont Abbey signee, has an ERA of 1.54 this summer.
“Brandon was throwing his changeup and curveball for strikes,” Gantt said. “He located the fastball away, and he did a good job of moving hitters back and forth. They’d start leaning and looking away, and he’d come back in on them. Trevord Atwood did a good job calling the game.”
Rowan leadoff man Chandler Blackwelder, who is batting. 402, had another productive night with three runs scored and two RBIs. He started the bottom of the first against Mocksville starter Carson James with a double, took third on Lee Poteat’s bouncer, and scored on Shepherd’s sac fly.
Rowan’s two-run third featured back-to-back doubles by Poteat and Shepherd, and Shepherd sprinted home from third as Mocksville chased Juan Garcia in a rundown between first and second.
Down 3-0 in the fifth, Mocksville (8-12, 5-5) had its best chance to make noise. Craig Colbourne doubled, moved to third on a bunt and scored on an infield hit by Neil Hutchins. But then Rowan turned a double play to get White out of the inning.
Shepherd’s three-run bomb in the fifth, with Blackwelder and Poteat on base, blew it open. Blackwelder’s speed and hustle had beaten a routine-looking force play at second right before Shepherd connected.
“I think I was lucky on the homer,” Shepherd said. “I didn’t think it was going to be high enough. It might have skimmed the wall.”
Blackwelder, Shepherd and Garcia had run-scoring hits in the fifth, as Rowan expanded the lead to 9-1.
Rowan tacked on its final run in the seventh. Atwood was hit by a pitch, moved to third on File’s second double, and scored when Blackwelder hit into a fielder-choice.
Shepherd pitched the last three innings for Rowan. He had his good fastball and allowed only one hit.
“I didn’t hit as many spots as I wanted to,” Shepherd said. “But I felt great.”
Mocksville managed to go the distance, even though Rowan had chances for the 10-run rule in the seventh and eighth. A Mocksville fan also exited with the $200 half-and-half prize money.
“We’ve got a lot of guys on the disabled list, but we were excited to play when we came over here,” Mocksville coach Charles Kurfees said. “We just made too many mistakes to give ourselves a chance — and Rowan has some good ballplayers.”
Rowan wraps up the regular season tonight a Northwest Cabarrus High against Kannapolis.
•••
NOTES: Kurfees praised the effort of James, who pitched six innings… Kannapolis was rained out Wednesday and is playing two games today. Kannapolis will play Stanly at 1 p.m. this afternoon. … Kannapolis will honor eight members of its 1952 state championship team prior to the Rowan game. One of those eight, Landis’ Billy Ray Barnes, is scheduled to throw out the first pitch. … John Owen will pitch for Rowan tonight.

Childress and Lyerly tie for first, qualify for US Junior Amateur