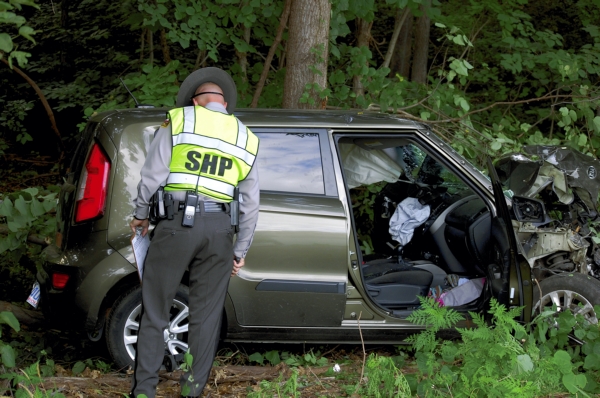 A state trooper inspects a Kia sports utility vehicle which was involved in an Interstate 85 southbound wreck Tuesday evening near N.C. 152. The driver was injured, and the vehicle, badly damaged in the front, ended up at the edge of woods off the right side of the interstate. Mark Wineka/Salisbury Post

Driver hurt in I-85 wreck near China Grove

CHINA GROVE — A driver was seriously hurt Tuesday evening in a two-vehicle wreck in the southbound lanes of Interstate 85, just south of N.C. 152.

After colliding with a truck pulling a small trailer, the woman’s Kia sport-utility vehicle left the road to the right and ended up in the edge of woods.

Rescue workers had to free the woman driver from the vehicle before she was transported by ambulance to Carolinas Healthcare NorthEast in Concord. Troopers with the N.C. Highway Patrol investigated.

A couple headed for upstate South Carolina saw some of the accident unfold ahead of their van. “There was a lot of smoke, and then she very quickly ran off the road,” the woman passenger in the van said.

The Kia’s front end was completely pushed in, and after it came to rest, the Kia was pointed northward.

The accident occurred about 6:45 p.m. not far from the entrance ramp to I-85, and it snarled traffic on southbound I-85 for more than a half-hour.

At first, emergency responders called for a medical helicopter to fly the victim to a hospital, but it was determined the helicopter was about 30 minutes away.