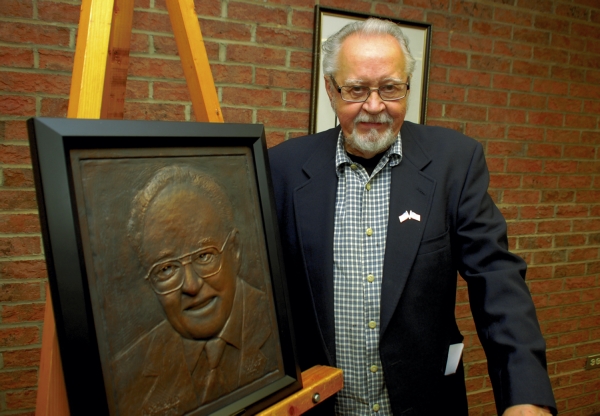 Artist Robert Toth stands with the sculptured relief he did of the late Archie Rufty, one of the main benefactors behind the Rufty-Holmes Senior Center. Toth donated the relief to the senior center Monday on what would have been Rufty's 102nd birthday. Mark Wineka/Salisbury Post The late Archie Rufty, shown in this sculptured relief by artist Robert Toth, was a major benefactor of the Rufty-Holmes Senior Center. At one time, Rufty was the largest individual holder of Food Lion stock. Mark Wineka/Salisbury Post

SALISBURY — Now, thanks to artist Robert Toth, the late Archie Rufty belongs to the ages.

“We’re passing through history, but this becomes history,” Toth said Monday afternoon when he unveiled the sculptured relief he did of Rufty and donated it to the Rufty-Holmes Senior Center on South Martin Luther King Jr. Avenue.

Rufty, a Salisbury attorney, solicitor and District Court judge, was once considered the largest individual stockholder, outside of Ralph Ketner, of Food Town/Food Lion stock.

Along with the Hurley family, Archie and Frances Rufty gave a significant monetary gift — $200,000 — which was crucial to the Rufty-Holmes Senior Center’s being built almost 30 years ago.

In all, Archie Rufty and his family gave upwards of $1 million to the center. Monday actually would have been Archie Rufty’s 102nd birthday. It also marked the eighth year since the Rufty Fitness Annex at the center was opened.

David Lee, president of the Rufty-Holmes Senior Center board, said the community was blessed to have a great senior center supported though the years by so many benefactors — benefactors such as Rufty.

“It’s good to see something that will last for a long time,” Lee added of Toth’s gift.

Toth personally has taken advantage of many of the senior center’s programs and teaches one of the center’s art programs. the “Mind Aerobics Art Class.” He also exercises in the Rufty Fitness Annex.

Toth said he first came to the center to join its computer club in 1995.

“It was very nice for me to enjoy the facility, so this is payback for me,” Toth said.

Over some 40 years, Toth said, he has done 80 to 100 sculptures in his “genius master series.” The piece on Rufty is a face relief — creating dimension on a flat surface — and it’s a study based off many photographs he had of Rufty.

Rick Eldridge, executive director of the senior center, said the Rufty relief will hang in the entrance foyer to the Fitness Annex.

Toth never met Rufty, but he said his relief was a tribute to “someone who has done good,” and that good news should receive as much attention as bad news.

“I feel so strongly that people like this should receive recognition,” Toth added.

Eldridge said Rufty was one of the benefactors who “made a lot of what the center has possible.” The Ruftys’ generosity was crucial to the construction of the original building, its expansion, the Fitness Annex and a picnic shelter.

Rufty died in 2002. He practiced law in Salisbury for much of his career until retiring and moving to Las Vegas, Nev., in 1989. He also was a big supporter of Catawba College, from where he graduated in 1935.

By Mark Wineka mark.wineka@salisburypost.com GRANITE QUARRY — Though a couple of members pushed for more of a decrease, the Granite Board... read more