Pasta 101: How to turn a few ingredients into dinner 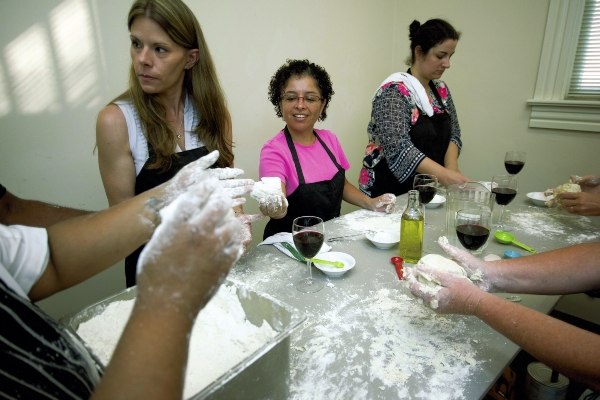 Rule No. 1 in making pasta from scratch: You will get flour on your apron.

About a dozen people gathered at Your Kitchen Store at 121 W. Innes St. last week to learn how to make pasta from scratch. They were eager, talkative and more than a little messy. Because they were meeting new people and having fun, it took a few minutes to settle down while chef D’Andrea Lawson of Divine Appétit Co. gave them instructions for mixing the dough.

Each station had a cup of flour in a small mound on the table. Next to that was a small bowl with a single egg. There were pitchers of water, bottles of oil and salt, along with measuring spoons.

“Make a well, a hole in the center,” Lawson told them. “Crack your egg into the center of the hole.”

“In the flour?” “On the table?” “Now?” “Like this?” except for one person who’d made pasta before, John Thomas of Salisbury. He helped his table-mates out.

Repetition finally got the group straightened out.

Immediately, water, egg and oil began running across the two tables as the students struggled to mix their ingredients by hand. Laughter and screeches filled the two rooms. Wine was served, which helped some students, but not others. But everyone was having a good time.

In one corner, a pot of marinara sauce bubbled away, along with a huge pot of boiling water. In a bowl to the side sat pesto, dark green and luscious. These would be the sauces.

At the beginning of class, everyone introduced themselves and told a little about their background. One couple was there as a birthday present. Danielle DeNise said husband Michael does most of the cooking and wanted her to learn. She is a pastor at St. John’s Lutheran Church.

Lawson went around checking progress and picking out good examples to show the others, including Thomas’ dough.

“These pastas you’re making will go home and you can make anything with it, ravioli is easiest, because you can just roll out the dough.” A wave of disappointment went through the crowd.

Then Lawson revealed a dozen balls of dough that had been refrigerated and rested the proper time, about 2 to 4 hours.

Out came the pasta machine and, if possible, folks got even more excited. First, they had to clean up their area, using a bench scraper, a piece of equipment many had not seen before. It’s a piece of metal, generally rectangular, with an attached handle that makes cleaning up sticky dough a breeze.

Lawson then gave instructions on how to handle the pasta dough and reminded them, “Flour is your friend,” if anything gets sticky.

Class members carefully stretched out their dough, getting it ready to go through the hand-cranked machine. “You start at zero,” the chef said, running a piece through the machine, “and it depends on what you make where you’ll go next. She ran it through twice at 0, twice at 1, and for fettuccine, once through 3, making, with the help of her students, long strands. Participants were amazed at the magic of the pasta machine, and they were getting hungry.

The pasta went back on the table with a sprinkling of flour, to let it dry a bit. Jim O’Donnell, who recently moved to Salisbury, wanted to make angel hair. A turn of the dial and a change of position on the machine, and out came the fine strands of vermicelli, or angel hair. O’Donnell was thrilled.

“What sauce do you want? Marinara or pesto? The pesto is made with kale, so it’s good for you.” The aroma of garlic filled the air as the sauces hit the warm pasta.

Some folks had opted to make ravioli, with a choice of fillings, one with chicken and pineapple, one a mix of cheeses and plenty of garlic.

The ravioli really had a  homemade look, different shapes and sizes, depending on how the sheet of pasta came out of the machine. The pillows of stuffed pasta were quite full, and took a little longer to cook.

Plates passed around and around as people tried each other’s concoctions.

“That’s really good!” was heard many times, as if they were surprised that they’d been successful.

Danielle and Michael DeNise had a blast. “This is a great class,” Danielle said. She made fettuccine.

At this point, all the borrowed black aprons were well dusted with flour, as were the tables and people’s shoes.

Pam Soeth, who attended despite being in a foot cast, made huge ravioli, which turned out to be delicious. “I don’t know if this is the wine talking,” she said, “but this is good stuff.”

Your Kitchen Store owner, Dennis Lunsford, is working on a schedule for future classes. All the classes will cost $50 per person or $90 per couple. The classes are two hours, 6-8 p.m. on a Tuesday or Thursday and include a free glass of wine. Participants get a 10 percent discount on items in the store during the class. Divine Appétit Co. cater sand provide the food for Hood Seminary, as well.