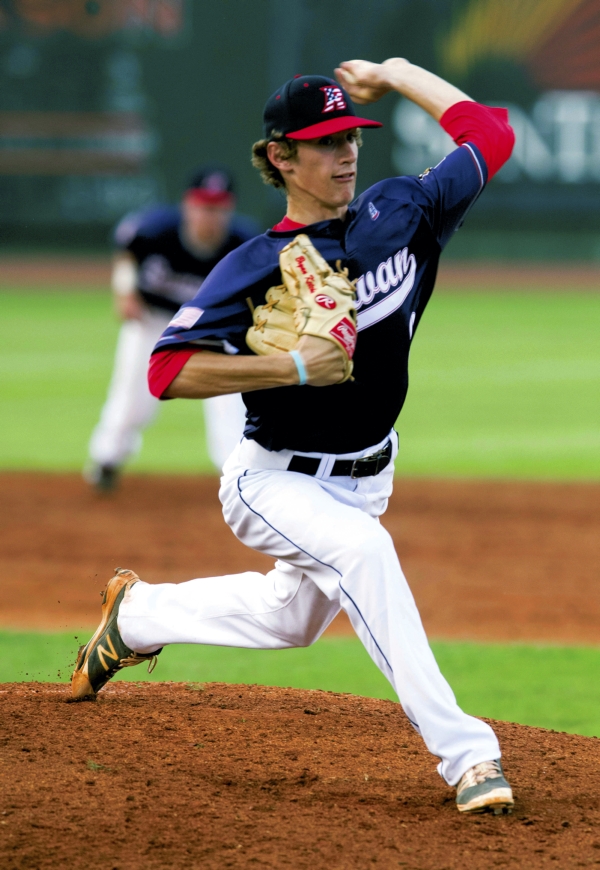 SALISBURY — Stanly County pitcher Sawyer Lee recently was named to the Louisville Slugger All-America team.
Lee was as good as advertised on Tuesday at Newman Park, but Rowan County still managed to beat Stanly, 3-2. Brandon Walton slugged a two-run homer, Hunter Shepherd delivered the game-deciding, two-out hit in the fifth, and Bryan Ketchie was sharp on the mound.
“Now that was a pitcher’s duel,” Ketchie said with a sigh of relief.
Walton took the mound for the ninth and nailed down the last three outs, as Rowan (19-8, 7-1) clinched the division championship and earned a bye for the first round of the Area III playoffs.
Lee, who is headed to Wingate, and Ketchie, who signed with Catawba, combined for zero walks. They were so efficient and worked so quickly that the game was concluded in under two hours. They almost didn’t need the lights.
“Ketchie is a smart pitcher, he mixed it up, he kept us off-balance,” Stanly coach Jordan Sells said. “We had a lot of men on base and we had our chances, but every time we had a chance, Ketchie showed what kind of competitor he is. We were one hit away, but we couldn’t get that hit.”
Rowan struggled defensively in the top of the second, as Stanly (5-12, 2-7) grabbed a 2-0 lead.
“That inning was a little messy,” Ketchie said. “But our defense was good the rest of the way.”
Ketchie, 4-1 this summer and 10-1 in his career with Rowan Legion, isn’t normally a strikeout pitcher, but he fanned nine Stanly hitters.
“My curveball was my best pitch and I was getting strikeouts and groundballs with it,” Ketchie said. “And (catcher) Jake Pritchard called a great game again.”
Lee made short work of Rowan in the first inning, but Juan Garcia walloped a double to deep right leading off the second, and then Walton smoked a homer to right-center for a 2-all tie. It was a no-doubter from the instant it left Walton’s bat.
“Their pitcher has a great curveball, and it made his fastball look even quicker,” Rowan coach Jim Gantt said. “But Brandon can hit. He got a fastball, and he hit it hard.”
Stanly had at least one baserunner every inning against Ketchie, but he stranded two men in the third and dodged a leadoff double in the fourth.
Rowan got the go-ahead run — and the last run of the game — in the fifth. Chandler Blackwelder beat out an infield hit with one out and was at second base with two out when Shepherd drilled a single through the right side. Blackwelder’s speed enabled him to beat the throw home with ease, and Rowan led 3-2.
“Shepherd had been struggling a little bit and Walton had been struggling some, but you don’t take them out of the lineup,” Gantt said. “They’re going to hit sooner or later. With guys that can hit, it’s always just a matter of time.”
After Shepherd’s RBI, it was up to Ketchie to hold the lead.
He worked around a leadoff single in the sixth and he retired the next two hitters after a one-out single in the seventh. Stanly went the entire night without ever getting back-to-back baserunners.
Crunch-time arrived in the eighth when Cooper Burgess produced a one-out single and Matt Lambert’s two-out single put runners on the corners. Walton was the DH, so he had time to warm up. He was ready to come in, but Gantt stayed with Ketchie, who was facing Tyler Huneycutt.
Basically, Ketchie had earned the right to win it or lose it.
“Ketchie had done so much work that we hated to take him out of there,” Gantt said. “If he gave up a hit and we ended up losing, well, at least it was going to be on him. He was facing a guy he had handled, and he got the big out.”
Ketchie got Huneycutt to rap a routine groundball to second baseman Tanner File, and the inning was over.
Lee couldn’t find his changeup, but he almost went all the way for Stanly. Lambert relieved him and got the last out in the eighth with two Rowan runners on base.
Walton got two strikeouts in the ninth. In between, Blackwelder successfully pursued a long drive to left-center and caught up to it at the warning track.
“Walton has a great arm and a good breaking ball,” said Gantt, after Walton notched a save. “He can hit, but pitching might be his ticket.”
•••
NOTES: Lee’s phenomenal high school season at South Stanly (22-7) included 144 strikeouts (nearly two per inning) and an ERA of 0.58. Lee was able to cool off Rowan right fielder Lee Poteat, who entered the game batting .494. … Stanly shortstop Cody Cline, who is headed to Mars Hill, was dazzling. … Stanly could be dangerous in the playoffs. Sells believes the arms of Lee and Lambert will give Stanly a chance to upset someone in a best-of-three, first-round series… Walton, a rising senior, hit four homers during the prep season for West Rowan. … Rowan County has won a regular-season title in each of the past four seasons. … Mocksville visits Newman Park tonight at 7 p.m.

From staff reports The Rowan County American Legion team has three games left in the regular season and needs one... read more