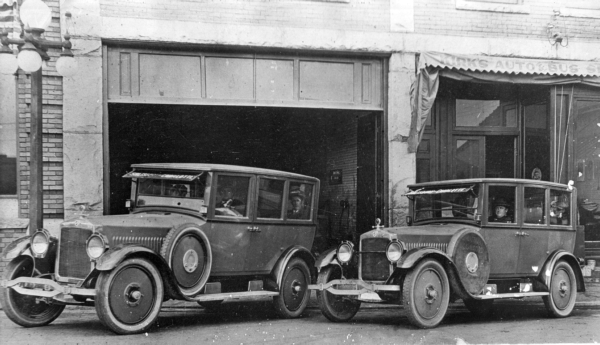 This is a photograph of some early nine-passenger buses, maybe 1923 Studebakers, that were operated out of Salisbury by A.B.C. “Chubby” Kirk, who  entered the bus business in 1919. He initially started regular bus service to the Barber depot to pick up train passengers there and bring them to Salisbury, but he soon added lines to Kannapolis and later was going from Greensboro to Charlotte. Kirk sold the bus service in 1926 to Southern Coach Lines, which eventually became Carolina Trailways. But Kirk stayed in the transportation business with Kirk’s Taxi, which became one of the city’s leading taxi services into the 1970s. A.B.C. Kirk died in 1961. His granddaughter, Dorothy Kirk, provided this photograph to the Post, and she thinks Chubby Kirk is the man driving the car on the right. The cars look to be parked in front of Kirk’s office and garage, located at the Yadkin Hotel. The garage went all the way through the block.