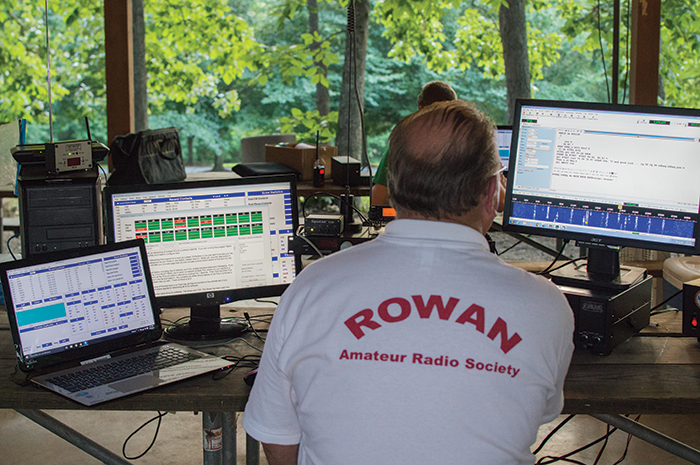 MOUNT ULLA — It was the early 1970s, Ralph Brown was still a novice and he unknowingly radioed a government official in Argentina.

Brown hadn’t intended to talk about Argentinian politics. He hadn’t yet received his amateur radio license, and was “ragchewing” — a term used by radio operators that equates to talking casually with others.

“I gave a call and a guy came back with what was an odd call to me,” Brown said. “I knew it was out of country, and it turned out that he was with the government or a consulate at some place in Argentina. Talk about a novice getting a call from Argentina, that’s really something.”

That brief communication with an unknown person in Argentina ranks as Brown’s most memorable moment during his time in amateur radio. He attended a class in 1972 to explore an interest in radio and has been hooked ever since.

On Saturday, Brown was back at it again during a Rowan Amateur Radio Society event at Sloan Park. In his time with the radio society, Brown has held every office available.

“The club is special to me, and I’ve tried my best to make sure it continues,” he said.

What’s kept Brown and other members of the club involved for so long? A number of members on Saturday easily answered that question.

Rowan Amateur Radio Society members were gathered at Sloan Park Saturday for their annual field day. Its purpose is to hone the skills of licensed amateur radio operators. Clubs across the nation were also participating in a field day as part of an event promoted by the Amateur Radio Relay League.

Field day is different than other amateur radio events because operators only use emergency power, such as batteries or generators.

The field day is similar to what might happen in the event of a natural disaster, an event where amateur radios have an advantage over other forms of communication.

“Towers may be down or something like that, but people would still be able to communicate with outside communities,” Brown said.

It wasn’t all that long ago that amateur radios were advantageous in daily situations, said Rowan resident and radio society member Larry Wright.

“In the days gone by, before computers, a lot of people would run what are called phone patches to military people in other countries to avoid the high toll charges on telephone calls,” Wright said. “That used to be very common. Now, with computers, people very seldom do that.”

Wright said he finds it interesting that amateur radio operators in countries such as Russia won’t talk about politics.

“You’ll ask them ‘Well, how’s Putin doing these days,’ ” Wright said. “They won’t discuss that … They have sort of cut-and-dried contacts.”

This weekend’s event ran from noon on Saturday to noon on Sunday. Rowan Amater Radio Society will be back at it again in 2017 on the fourth full weekend in June.