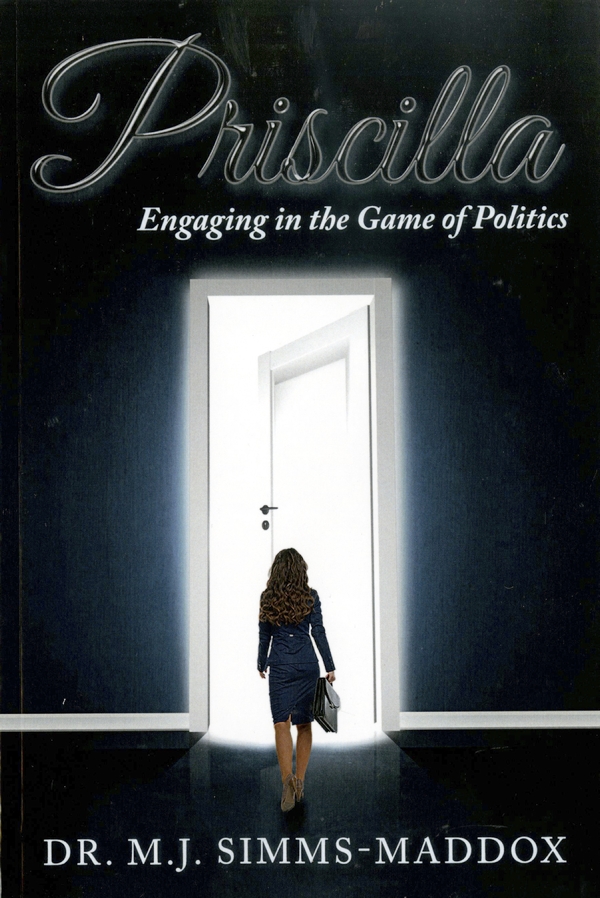 Livingstone's Dr. M.J. Simms-Maddox has written her first book of fiction, the beginning of a trilogy.

After writing for others for more than three decades, political science Professor M. J. Simms-Maddox presents “Priscilla: Engaging in the Game of Politics,” her debut as a fiction writer.

Set in the early 1980s, “Priscilla” portrays a bright, carefree, enterprising young woman strongly bound to her father — a Methodist minister and a consummate politician, about whom she has conflicted feelings. Shortly after beginning her career as an assistant professor of political science at Florida A&M University in Tallahassee, her father mysteriously asks her to relocate closer to home (Prendergast, N.Y.).

She contacts an Ohio state senator for whom she performed an internship during her graduate studies at The Ohio State University and with whom she had an affair. The senator offers her a job as his legislative aide. She accepts. Then, once she moves to the capital city of Columbus, she engages in the game of politics of her own volition. Eventually, she gets caught up in “the political scandal of the decade.”

Along the way, “Priscilla” takes a deep look at the forces which made her what she is: her family roots in highly-segregated Mississippi, her upbringing in upstate New York where subtle racism leaves its scars despite her father’s loving protection, a campus date rape that leaves her with unhealed wounds, and a scintillating season as a high-powered legislative aide embroiled in a life-altering political scandal.

It all began one day, while hiking at Grandfather Mountain with her friend Ada White Taylor. Simms-Maddox told her about a recurring dream she was having about a conversation with her father, who died in 1981. “It was not a bad dream, rather one in which a loving father shares precious thoughts about his life and his hopes for his beloved daughter.”

Her friend Ada told her, “The next time you have that dream, write it down.”

Once she started writing down her recollection of that conversation with her father, Simms-Maddox would write and write and write. By the fall of 2003, she finished what her first editor said were “three stories in one.” Then, after extracting the story that depicted a political theme, “Priscilla” emerged.

“Priscilla: Engaging in the Game of Politics” is the prequel to her Priscilla trilogy, which chronicles the coming-of-age and adventures of a young woman abducted from her comfort zone in the American Midwest to southern Africa — Zimbabwe and apartheid-ruled South Africa —and back home again. The middle story and the sequel are forthcoming.

Simms-Maddox’s Salisbury connection dates back to her enrollment at Livingstone College in the fall of 1970. She graduated in 1974, and returned to the college in the summer of 1994 as associate dean for Institutional Advancement. She has also served as director of development at Hood Theological Seminary, as an adjunct instructor at Rowan-Cabarrus Community College, and on the Livingstone College faculty, where she is a tenured professor in political science and chairs the department of history and political science.

She is a founding member of the Livingstone Writers’ Club, an informal group of faculty whose writings cover the gamut, and she is affiliated with the Professional Woman Network, the North Carolina Writers’ Network and the Women’s National Book Association. She enjoys her service on the Rowan Arts Council, as well.

She credits her mother, the first in the family to publish, for the inspiration to write. She thanks her siblings, husband, former instructors and friends with supporting her along the way.

Simms-Maddox is scheduled to participate in a reception and book signing at the Professional Woman Network International Conference for coaches, consultants, speakers and authors on Aug. 6 in Louisville, Ky.

Priscilla is published in consultation with Professional Woman Publishing, LLC.

Visit www.mjsimmsmaddoxinc.com for more about the author and to purchase Priscilla.