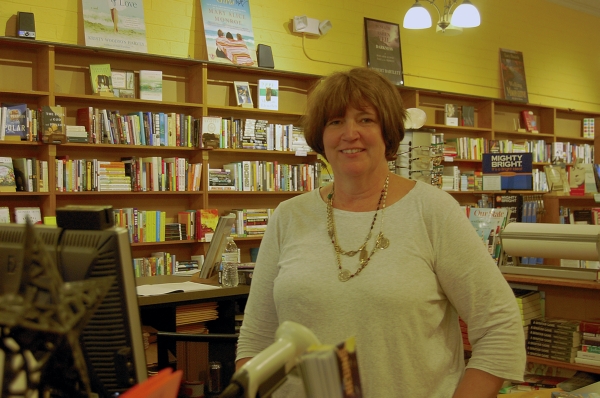 Amanda Raymond/Salisbury Post After working at the Literary Bookpost for a year, Wendy Beeker will be taking over the store at 110 S. Main St. She plans to rename the store South Main Book Company.

SALISBURY — The Literary Bookpost, at 110 S. Main St., is under new ownership and will soon be under a new name.

Wendy Beeker, who has been working at the Literary Bookpost for a year, will both own and run the store.

Bill and Cora Greene were operating the store, but Beeker said they were ready to sell it.

“Bill and Cora decided they wanted to sell the store and they approached me about buying it,” Beeker said. “We came to a good agreement.”

Though most things won’t change at the store, one big change will be the name. Beeker is changing the name to South Main Book Company to reflect a fresh start.

“I just wanted to keep it basic and simple,” she said.

The interior of the store will be staying pretty much the same. Beeker said she may do a little painting and add some more furniture.

She will also be strengthening the book inventory and bulking up the North Carolina history section.

Beeker has plenty of experience with bookstores.

She moved to Salisbury from upstate New York in 1986. She married her husband Jock in 1989 and they moved to Georgia when Jock received a job offer. They lived in Georgia for 17 years.

While in Georgia, Beeker owned a bookstore that started out as an antiques and painted furniture store.

“My grandmother left me some money and I had named the store after her, Patty’s,” she said.

Beeker expanded the store to include a bookstore on one side and keep the antiques on the other.

“I like to do both,” she said. “So there may be a little bit of that in here down the road.”

Beeker said her strengths are in literary fiction and short stories. She is also interested in history. She depended on her customers to recommend books and authors in genres she was not as strong in.

“I rely on customers for help in maybe the mystery writers or poetry or cooking,” she said.

She eventually sold the bookstore in Georgia and started an artist cooperative, which she also later sold.

Beeker moved back to Salisbury in 2010 and started Grayshores Trading Company at 119 S. Main St.

The Literary Bookpost is actually the fifth bookstore Beeker has worked at.

She said bookstores are an “important part of the community.”

“Being a well-rounded reader touches every aspect of your life and it opens you up intellectually, emotionally,” she said.

Beeker said she has received a lot of support from locals and visitors and enjoys being a part of the downtown community.