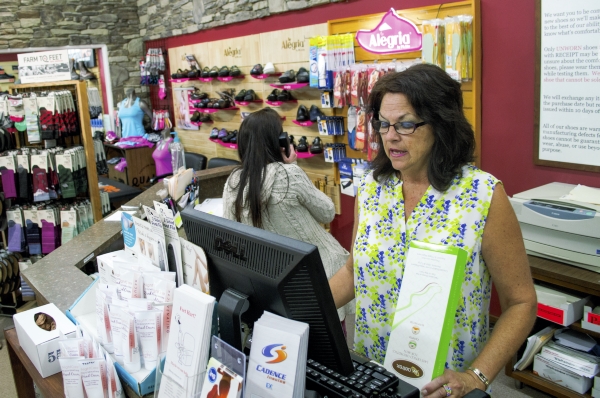 SALISBURY — Following the 2008 economic recession, thousands in Rowan lost jobs over a period of years, but it now appears that the county is on the cusp of a full recovery.

Statistics from several of sources show that Rowan County’s economy is doing better, but hasn’t bested pre-recession numbers. Tax revenue received by local municipalities and county government tops levels from before the recession. Residential and commercial building permits are relatively close to pre-2008 levels. The unemployment rate, however, hasn’t risen above its best pre-recession level, and fewer people in Rowan County are employed, according to labor statistics.

Those statistics may be proof of anecdotes from local business owners. Jane Crosby, who owns Queen’s Gifts in downtown Salisbury, mentioned her experience and nearby business turnover as evidence that downtown Salisbury hasn’t fully recovered.

“It definitely felt like we had to crawl out of the hole a little bit after the recession,” Crosby said.

“I feel like there’s been a little improvement, but nothing huge,” he said.

There’s optimism, however, about economic prosperity in the near future among Rowan County’s leaders.

“I feel like we’re heading in the right direction, but I believe Rowan County has some structural issues that we will have to deal with before we will be able to declare that we are on our way to success,” said county commissioners’ Chairman Greg Edds.

Although Rowan hasn’t completely recovered, there are a number of economic indicators that have sharply improved from the depths of the recession. For example, the two largest Rowan municipalities — Salisbury and Kannapolis — are generating more sales tax revenue than ever before.

“We are bringing in exciting, new retail that we’ve not had before,” he said. “We’ve talked about retail leakage before, where people go somewhere else like Concord Mills to spend their money, and bringing in new retail may help capture that.”

He said Rowan County may never be able to capture all of its retail leakage, but “stopping the backward slide” is important.

Rowan County Chamber of Commerce President Elaine Spalding said her organization is stronger than it was three years ago, when she took the job as its president. RowanWorks Economic Development Director Robert Van Geons also said the county is nearly out of available industrial space.

A dose of reality

The unemployment rate tells a different story than other statistics. Although Rowan has improved slightly from the depths of the recession, when 14.1 percent of people were unemployed, there’s still significant work to do before the county beats or matches its pre-recession levels.

However, there’s more to unemployment figures than a percentage, Walden said.

“To be counted as unemployed, you have to be an individual who doesn’t have a job and who wants a job,” he said. “You also have to be someone that’s actively looking for a job … So, the unemployment rate can be a deceptive number.”

Although Rowan County’s unemployment rate is close to recovering, about 6,300 fewer people were employed at the end of 2015 than the best point before 2008, according to labor statistics. An even larger number of people have dropped out of the workforce.

Van Geons said a change in the way statistics are calculated may be to blame for the number of people counted as no longer in the workforce. However, he also said Rowan County’s economy hasn’t fully recovered.

“While the economy isn’t moving forward the way or at the pace everyone would like to see, we are growing,” he said.

Walden speculated that Rowan and other rural counties that previously relied on industries such as textiles “have not really been able to latch onto anything to replace those.” Meanwhile, metropolitan areas have been able to embrace industries that include technology and pharmaceuticals, he said. Many of the state’s largest metropolitan areas also contain major universities.

Edds admitted that Rowan County’s economy could grow at a faster rate than it has.

“I don’t think from an employment perspective we are anywhere near where we should be,” he said. “Even though we had a 6 percent unemployment rate (at the end of 2015), a lot of people have just stopped looking for a job. They have given up.”

Rowan’s unemployment rate for April — the latest available — is slightly lower than 6 percent. However, labor statistics still show that thousands have dropped out of the workforce.

Despite the mixed economic bag, Rowan County’s residents and elected leaders say they’re optimistic about the future. Spalding pointed to the 2014 County Commissioners election as a turning point, at least one of them, for her optimism about the future.

“The leadership changes at the county commission level and with their improved working relationship with other municipalities has energized the business community,” she said.

The goal of county commissioners has been to provide more space for new businesses. Edds said the problem isn’t that businesses aren’t coming to Rowan County. A lack of space can also hinder growth.

“One of our goals right now is to create a system where we won’t get caught with our pants down, without site-ready facilities,” Edds said. “We need to be identifying the next two dozen industrial sites, not the next two or three.”

With the interest Rowan has received from new businesses, Van Geons said Rowan County now has the opportunity to significantly shape its future.

“If we make the right investments, we can drive our community forward and see some really spectacular results,” he said.

Mark Wineka mark.wineka@salisburypost.com GRANITE QUARRY — It’s not much, but, hey, it’s something. Granite Quarry businesses and residents could see a... read more