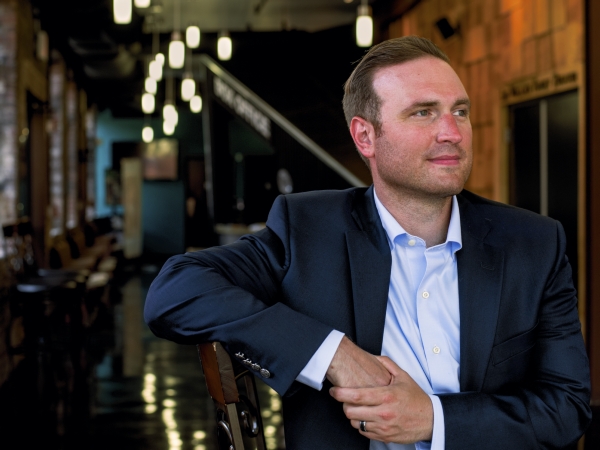 Justin Dionne, managing artistic director of Lee Street Theatre since 2012, poses for a portrait at Lee Street Theatre in Salisbury on Wednesday. Dionne is leaving at the end of July to attend graduate school for theater management at Florida State University. Allison Lee Isley/Salisbury Post

Departing Lee Street Theatre artistic director: ‘I didn’t do any of this by myself’ Justin Dionne and a patron during Night at the Cirque in May at Lee Street Theatre. Photo by Susan Shinn

SALISBURY — At the end of this month, Justin Dionne will exit stage left — or maybe stage right, it doesn’t really matter — and leave Lee Street Theatre to pursue the next level in his career.

In August, he’ll begin a three-year master’s program in theater management at Florida State University. Dionne, 31, is one of only three students accepted into the program this year. Over the years, Dionne has realized that any future theater job will require a master’s degree. He says the timing is good.

“I’ve been doing this for the past six years,” he says of his career in Salisbury. “I’m grateful. I didn’t do any of this by myself.”

Dionne, a graduate of West Rowan High School and Catawba College, returned to Salisbury in 2010 after stints in New York and Chicago — working the kind of jobs you’d expect a young actor to work. He planned to come home to live with his parents to save money. Two months max.

Instead, he became marketing director for Piedmont Players Theatre, getting wonderful hands-on experience as the Norvell Theatre was being built. Through his work there, Dionne got to know people in the community.

“I always want to connect,” he says. “I’m outreach oriented.”

In 2011, he started thinking about graduate school. He admits his undergraduate career at Catawba was not stellar.

“I was young and I just wasn’t focused,” he says.

“He was someone who struggled a bit academically,” says Dr. Beth Homan, an associate theater professor at Catawba. “But he was a charming kid and a solid actor.”

When Dionne waited tables at Brick Street restaurant in 2009, there was a white-haired man at the bar who yelled at him, “Hey! You need to come be in a play!”

That would be Robert Jones, who’d started Lee Street Theatre.

“I was theatered out,” Dionne admits.

But Jones wouldn’t take no for an answer.

Then Dionne left town, seeking brighter lights in bigger cities. Still, when he’d come home, there was Jones, still hollering at him in his wild-eyed manner: “Hey! You wanna run a theater? I got a theater you can run.”

“On one level, I wasn’t kidding,” Jones says now. “He saw the possibilities in Lee Street.”

Jones and Cindi Graham were working full time. They needed someone to put together an active board and, as Jones says, “make it a real theater.”

“That’s when we started the whole process of looking for a building and doing a capital campaign — and the rest is history,” Jones says.

Which is where Dionne entered stage left — or maybe stage right, it doesn’t really matter. With guns blazing, as he likes to say, the new kid came to help shape the vision of Lee Street Theatre.

“Bill Greene had the initial spark, and I was able to build structure around it,” Dionne says.

Greene brought in Al Wilson and Jon Palmer to transform an old warehouse into a performing arts space.

“We started to develop the vision of the Rail Walk arts district,” Dionne notes. “This is how we got people on board. This wasn’t just about a theater. It was about community development.”

Dionne resigned from the PPT board to run Lee Street Theatre as its first creative artistic director.

The $1.5 million capital campaign, he says, “was definitely one of the most challenging thing I’ve ever done.”

In November 2013, the new theater opened midway through Lee Street’s sixth season of plays. Four months later, Dionne married wife Rachel, who graduated in 2012 from Catawba with a chemistry degree.

Dionne’s original idea for Lee Street has paid off over the years — that is, it’s not just a place to do plays.

“It needed to belong to the community,” he says. “There’s concerts, there’s stand-up comedy, there’s events, there’s gatherings and receptions. People will remember where they were when these things happened.”

The Dionnes had their reception at Lee Street, the first event of its kind for the venue.

“It was a great night,” Dionne says.

There have been other great nights in the past three years. Dionne has worked to bring diversity to Lee Street. For example, he chose “The Parchman Hour,” because, he says, “we were not hitting the African-American population of Salisbury.”

The Voices from the Margin series has lifted up homelessness and the school system.

Lee Street partners with the Convention and Visitors Bureau to produce the Scrooge Trolley Tour, and the N.C. Transportation Museum for The Polar Express. Both events have been huge holiday hits. Lee Street is the home of the St. Thomas Players, which chooses, casts and directs shows, which are produced by the theater.

“What Robert and Cindi were doing just created a new level of excitement. It was such a special theater experience for me,” Mickle says.

She adds, “When the opportunity came for St. Thomas Players to have a permanent home and be paired with Lee Street, it was just so exciting to me. Justin has made all the difference. He’s been this enthusiastic person who’s full of ideas, making connections in the community and just energizing everyone.”

So now it’s time for Dionne to exit stage left — or is it … Oh, never mind, you get the picture.

“In arts administration, you create something to have a structure, and to operate on its own,” he says. “I’ve tried my best. It’s like raising a kid. At some point, you gotta step back. I feel good. We have an awesome board.”

He adds, “We’re still a young company, and the only constant is change. We’re always trying something different. But the quality of our shows is nothing to be balked at.”

Shari Graham agrees. She’s the incoming board president for Lee Street Theatre. She and Dionne hit it off immediately, she says.

“He’s an incredible visionary and he not afraid to take risks,” she says. “He’s not afraid of going out there and getting what he wants. As young as he is, he’s really good at fundraising.”

The thing she admires most about Dionne, is that he’s always made his work about the arts.

She adds, “We’re at a good place with Lee Street Theatre. I’m thrilled for him, and I’m not worried about Lee Street. It’s a great opportunity for us to move forward.”

By Katie Scarvey For the Salisbury Post After her first marriage ended, Eugenie Eaborn’s children told her she needed to... read more