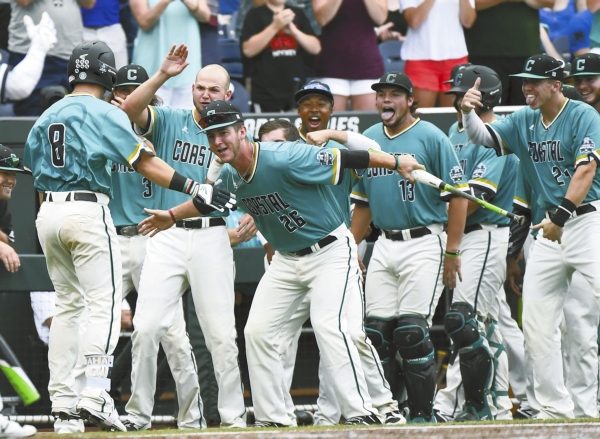 OMAHA, Neb. (AP) — It’s 1,300 miles from Conway, South Carolina, to Omaha, and it might as well have been a million miles between the two when Gary Gilmore took over the Coastal Carolina baseball program in 1996.

Now, here he and the Chanticleers are, getting ready to play Arizona in a best-of-three series for the national championship starting Monday night — in their first trip to the College World Series.

Coastal Carolina earned its spot in the finals with a 7-5 victory over TCU on Saturday night.

“It’s kind of like I’m in a dream. I’m scared to pinch myself, to be quite honest,” Gilmore said. “Coming from where I started 21 years ago, and where our university was and where we’re at today and on this stage is one of the most incredible things I could imagine.

“I dreamt of coming to Omaha. I don’t know if I ever dreamt getting to this point.”

Tyler Chadwick homered and doubled, Alex Cunningham pitched 6 1/3 solid innings, and the surprising Chanticleers (53-17) of the Big South Conference beat the Big 12’s Horned Frogs for the second night in a row to win Bracket 2.

“Their resiliency, toughness and talent have shown through in this tournament,” TCU coach Jim Schlossnagle said. “By no means are they a Cinderella. You don’t win 53 games as a Cinderella… The teams left this time of year are hot, talented or both. They’re both.”

Chadwick’s blast over the right-center wall opened the scoring, and the Chanticleers added two runs in the third and four in the fourth. They had only three baserunners over the last four innings, and TCU pulled within two runs with one out in the ninth. But Michael Landestoy hit into his third double play of the game to end it.

Alex Cunningham (10-4) scattered eight hits and allowed four runs before turning the game over to Bobby Holmes. The Frogs were 2 for 8 with runners in scoring position.

“We just couldn’t string a couple its together, some timely hits we probably needed to get,” center fielder Dane Steinhagen said.

Jared Janczak (7-4), the first of four TCU pitchers, lasted three innings and took the loss for the Horned Frogs (49-18).

“We pride ourselves on being relentless and getting it done when people are in scoring position,” Chadwick said. “For us to be the team we want to be, the team we’ve been all year, we have to hit 1 through 9.”

The Chanticleers have been playing baseball since 1975, and Gilmore took over a losing program with little returning talent in 1996. Fourteen of the school’s 15 all-time NCAA Tournament appearances, and all three of their super regionals, have come under Gilmore since 2001.

Their path to their first CWS finals was adventurous.

In regionals, an 8-1 loss to host North Carolina State forced a second final, and the Chanticleers were down 5-3 in the top of the ninth of that game when rain suspended play with Coastal Carolina having one out and the bases loaded. The Chanticleers came back the next day and rallied for four runs to win 7-5.

Then it was on to a super regional at LSU, where they squandered a lead before Michael Paez’s tiebreaking single in the bottom of the ninth produced a walk-off victory in the clinching game.

In Omaha, Coastal Carolina lost to TCU in its second game, meaning the Chanticleers had to win three straight to go to the finals. The Chanticleers knocked off Texas Tech on Thursday and TCU on Friday before beating the Frogs again.

“As disappointed as I’ve ever been leaving this great city,” Schlossnagle said. “We had the club to win this thing.”

The Chanticleers have won 19 of their last 21 games and are 4-0 in elimination games in the national tournament. They’ll attempt to become the first team to win the championship in a CWS debut since Minnesota in 1956. Coastal Carolina has never played in a national championship game in any sport at the Division I level.