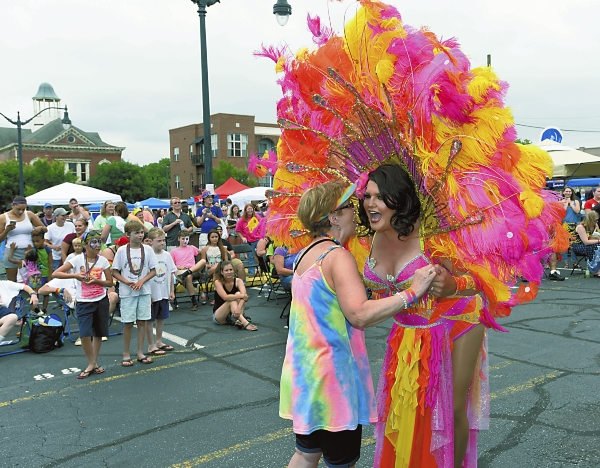 The Pride Festival drew a crowd to Salisbury in June 2016. Jamie Monroe, right, was one of two mistresses of ceremonies. Wayne Hinshaw /for the Salisbury Post

The rhythmic sound of music echoed through downtown Salisbury and crowds of people filed into downtown for an event that calls itself Salisbury’s largest street festival, but the context for this year’s festival was different than ever before.

For the first time in years, the festival received an official, mayoral proclamation. Former Salisbury Mayor Susan Kluttz issued one in 2011. Kluttz was reelected to the city council that year, but wasn’t reappointed mayor. Instead, Paul Woodson took the city’s top spot, and declined to issue a proclamation during his tenure. Although she didn’t attend this year’s Saturday’s Pride Festival, incumbent Mayor Karen Alexander issued the proclamation that Woodson wouldn’t.

When City Councilman Kenny Hardin and Mayor Pro Tempore Maggie Blackwell read the proclamation on Saturday, it drew loud applause and cheers from the audience.

During Saturday’s opening ceremony, Hardin briefly spoke before the presentation. He encouraged people not to pay attention to race, gender, sexual orientation, or other distinguishing factors that can be used to divide.

“Hopefully we can get to a day where none of that matters,” Hardin told the audience.

Blackwell said only three Salisbury City Council members have attended the festival since it started. Nine people have served on the city council in that time.

Throughout Saturday’s festival a smattering of people stood at the outskirts of the event in protest. Protesters screamed at festival attendees, handed out Christian literature and held up signs. One sign, for example, listed Bible verses and said “your party will end in a lake of fire.”Another protester walked through the crowd with a massive cross held in the air.

Salisbury’s Pride Festival also occurred against amidst statewide conversation about House Bill 2, which has drawn attention for a provision that applies to bathroom usage. Just a couple weeks prior to Saturday’s festival, the nation’s attention was also drawn to the death of 49 people in a shooting at a gay Orlando nightclub.

For the first time, Salisbury native Jamie Monroe says she regularly looks over her shoulder because of concerns about her safety. Monroe says she’s most concerned about how House Bill 2 has affected society.

“Since HB 2 came out, I’ve actually been looking over my shoulder,” Monroe said in an interview with the Salisbury Post. “And, I hate that. If it makes me nervous, and I’ve been performing for 31 years, I know it’s going to make some young trans person feel a little bit uneasy about what’s going on.”

She said it seems as if House Bill 2 and the Orlando shooting have added attention to LGBT issues.

“I honestly think that even creates more fear for young people because of the spotlight it puts on the LGBT community,” she said.

Monroe said a large portion of people, perhaps even a majority of society, don’t have a clear understanding of LGBT issues. She told a story about two friends who are lesbians, went to use the bathroom and were told by other females “you cannot be in here.”

House Bill 2 specifically requires people to use the bathroom that corresponds to their biological sex — the one stated on a birth certificate. Lesbian is a term used to describe a female who is attracted to other females. Transgender is a term that describes people whose gender identity differs from the one on their birth certificate.

“It just shows they’re confused about the whole thing, and that’s scarier than anything,” Monroe said about those who are uninformed. “They may do something to someone not even knowing the truth. They’re thinking that they’re fighting for what’s right, but it can hurt people.”

Monroe said she is less concerned about acts of terrorism or violence that involve the LGBT community in the Salisbury area than she is about the fallout from House Bill 2.

“I’m worried more about the religious extremists we have here more so than the ones from the Middle East,” she said.

Although previous elected officials haven’t supported the festival, Monroe and others, including Sheffield, said Salisbury has always been progressive for a small city. It’s estimated that 4,000 or more people attend the Pride Festival every year.

“I can’t say how much I love Salisbury enough, but it gets reinforced on days like today,” Sheffield said.