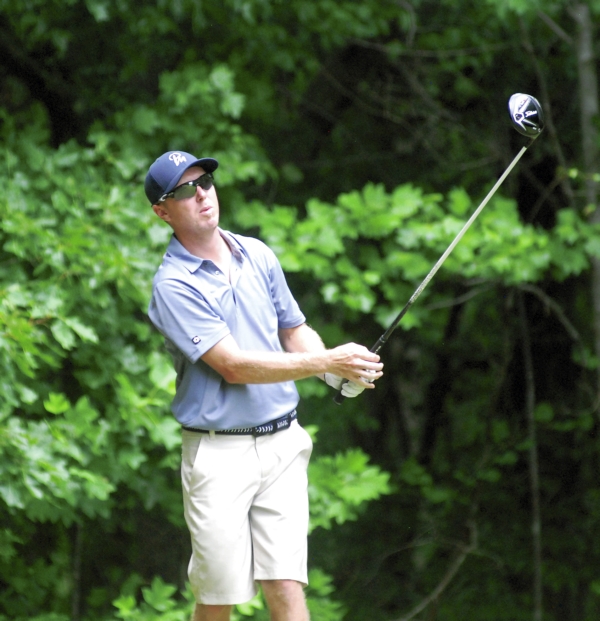 Dennis Davidson/Salisbury Post... Phil Miller watches his tee shot on the par-five 4th hole at Warrior Golf Club during the Rowan Masters Golf Championship quarterfinals on Saturday afternoon. Miller is the only former champion among the four semifinalists that will battle today. Miller defeated Keith Dorsett, 1-up, in 20 holes, in the quarterfinals.

Rowan Masters: Four to play for title on Sunday

CHINA GROVE — There’s a target on Phil Miller’s back — and he knows it.

Of the four semifinalists competing for today’s Rowan Masters Championship, Miller is the only golfer who has gone home with the hardware.

“The target’s been on my back for a while,” he explained Saturday at the Warrior Golf Club. “I’ve won here and I’ve won the Labor Day tournament twice, but it will nice (today) because a lot of those grudge matches are out of the way. The golf will speak for itself. Whoever plays the best will win.”

It’ll be an interesting mixed-party when the 31-year old Miller, the No. 3 seed, squares off against teenager Michael Childress and savvy veteran Richard Cobb meets 2013 Carson High graduate Andrew Purcell in the other semifinal.

“It’s been anybody’s tournament from the start,” said Childress, the No. 2 seed who needed 41 holes to defeat Jared Barnette in the second round and Patrick Gregg in the quarterfinals. “Phil’s obviously a great player. I’m looking forward to enjoying another round.”

Miller, the tourney champ three years ago, reached the semifinals by whipping Chace Jensen, 7 and 6, in the morning’s second round and outlasting sixth-seeded Keith Dorsett (1-up/20 holes) in the quarterfinals. Dorsett, a seven-time Rowan Masters champion, forced the playoff when he buried a gorgeous, 25-foot putt for par on the 18th hole.

“That didn’t surprise me,” said Miller, who was assessed a two-stroke penalty for an erratic tee shot on the same hole. “The whole match with Keith was close. No one was ever more than one hole up. That’s the way it is with us.”

Both golfers parred the first playoff hole before Miller capitalized when Dorsett lifted his approach shot out of play on the second. “That actually helped me,” Miller said, “because he hit first and sent it into the woods. All I had to do was hit in on the green.”

Childress, a 16-year old who qualified as the No. 2 seed, had an arduous day. He birdied the 18th hole and eagled the 19th to cap a stirring comeback win against Barnette in the early round. Then in the quarterfinals, Childress went 22 holes and more than five hours with Gregg, winning on a four-inch tap-in.

“It was a grind, a total grind,” Childress said. “I won the first two holes and then felt like I was fighting myself the rest of the day. I would get a hole and then give a hole.”

In the afternoon match, Childress and Gregg both birdied the first playoff hole and both parred the second and third. Then on the par-5, 513-yard fourth, Childress dropped a 93-yard approach shot on the doorstep.

“I just hit a really good wedge right there,” he said. “By then I was exhausted and thinking, ‘Thank God I don’t have to play another hole.'”

Cobb, 52, the oldest semifinalist, ousted top-seeded Andrew Morgan (1-up/19 holes) in the second round before sliding past Derek Lipe, 4 and 2, in the quarterfinals. “It’s my fourth time in the semifinals,” he’s quick to point out. “I’ve made the finals three times and lost every one of them. I’m here again, tired and wet, but I feel good.”

He should, despite carding a 1-over-par 6 on the decisive 19th hole. He can thank Morgan, who crash landed by delivering his tee shot into a water hazard on the right side.

“Then he tried to play it out of the water,” Cobb recalled. “But it didn’t come out. His next swing he did get it out, but he hit it into the woods on the far left.”

Cobb had an easier time against Lipe, the No. 25 seed. He sank birdies on 5, 9, 13 and 16 to win with room to spare. “I had to make birdies to win the holes,” he said, moments after earning his first trip to the semifinals since 2007. “But I never expected to play five rounds in three days. Now I’m gonna have to. I just signed up for the tournament to see where I stood. All of these guys are 15 years younger than me and they hit it a lot farther than I do. For me, it’s all about hitting it straight and making birdies. Straight is good.”

Fourth-seeded Purcell — a 21-year old former high school conference champion — isn’t face-on-a-lunchbox famous, but he’s a serious contender for the title. He routed Sean Kramer, 5 and 3, in the morning session and topped Shane Benfield, 3 and 1, after lunch.

His day started with a first-hole eagle and kept improving. Against Kramer he played 15 holes and hit 14 greens. “I just didn’t make many mistakes,” he said. “Finished four-under in that round.”

Purcell lost the first quarterfinal hole against Benfield, but won the next two and never looked back. It ended when he birdied the par-5 17th hole.

“It was just fairways and greens all day,” he said. “Once I got one-up, it was get to two. Once I got two, get to three. That was my focus.”

Would a championship today make the USC-Upstate upperclassman famous? “Nah,” Purcell said with a shrug. “(Sportswriter) Mike London used to talk me up a little bit on Twitter, when I played basketball, so I guess some people know me from that. Now that I’m at school in South Carolina my name doesn’t get thrown around too much any more.”

Rowan Masters under way with most top seeds winning