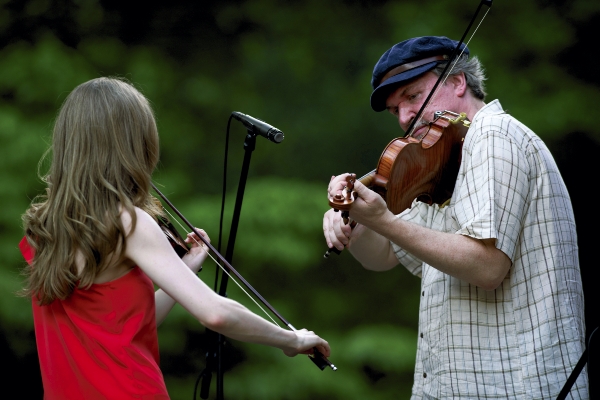 JON C. LAKEY / SALISBURY POST Mark and Maggie O'Connor performs a violin concert on the lawn of the Rowan Public Library on Thursday evening. Sitting in folding chairs and laying on blankets on the ground, the attendees enjoyed the violin harmonies that filled the very warm and muggy air. Thursday, June 23, 2016, in Salisbury, N.C.

SALISBURY — Rowan Public Library and the N.C. Bluegrass Association took advantage of a long summer evening to give Mark and Maggie O’Connor a chance to fill the air with the sounds of American fiddle playing Thursday.

The event was originally scheduled to be held in the library’s Stanback Room, but it was moved to the library lawn along South Jackson Street to accommodate a crowd of close to 200 people.

The audience sat in lawn chairs and library chairs. They spread out on blankets and leaned against trees.

Residents along South Jackson Street and their friends listened to the free concert from their front porches. Others pulled up, rolled down their windows and took in the music from their cars.

Mark O’Connor is one of the more well-known fiddle players in the country, having a storied career in the bluegrass, country, jazz and classical fields, playing with legendary musicians along the way. With his violin, he also has blazed new trails in American classical music as a composer while playing with some of the best symphonies in the world.

O’Connor is a multi-time Country Music Association Musician of the Year and a Grammy Award winner. He just recently moved to the Charlotte area from his longtime base in New York, and he is trying to get back to some of his bluegrass roots.

As a 13-year-old, O’Connor won the Grand Master Fiddler Championship, and he also captured national titles in the fiddle, bluegrass guitar and mandolin. Mark O’Connor, his wife, Maggie, son Forrest and Forrest’s fiancé, Kate Lee, are the core musicians in the recently formed O’Connor Band, which will be touring the country this summer.

The band has a new CD set to debut in August.

O’Connor also is the creator of the O’Connor Method for teaching American fiddle/violin to students of all ages. For at least 20 years, he has been conducting regular string camps, and he plans a 10-hour teacher training seminar in Charlotte July 9-10.

“We can use music to get back our society,” O’Connor said, “and that has to start with our kids.”

Vivian Hopkins, president of the N.C. Bluegrass Association, said her group promotes live bluegrass music “wherever it happens.” After moving to the Charlotte region, Mark O’Connor sent a message immediately to Hopkins and the association to let them know, “We’ve got to do something together.”

Hopkins and O’Connor said they hope it’s the beginning of a long relationship.

“It’s great to be a new resident of North Carolina,” O’Connor said to applause. “… It’s like a dream come true.”

O’Connor played a couple of solo songs, but mostly he played all manner of duets with Maggie. In between songs, he offered some background and touched on his career.

In his early 20s, O’Connor had played with Doc and Merle Watson, and he has a long history with Earl Scruggs, having appeared on some of his instrumental albums. He’s also a longtime friend with noted bluegrass guitarist Tony Rice, from their days with the David Grisman Quintet.

O’Connor was among the group of musicians who played at the first Merlefest in 1988, after Merle Watson was killed in a 1985 tractor accident.

“I love this part of the country, I love this culture,” O’Connor said.

On one of his first solo songs, O’Connor brought out the white-painted fiddle he used when he first started playing in Washington State and was learning from Benny Thomasson.

“I actually hardly ever play it,” O’Connor said of the fiddle that was on display for 15 years at the Country Music Hall of Fame. He said the fiddle shared a display case with a pair of sneakers from Willie Nelson.

He retired the white fiddle when he stopped entering competitions.

Today, the fiddle has seven cracks on the top, but O’Connor was still able to make it sing. He said fiddles, after a while, tend to emulate their owners, “like a good dog.”