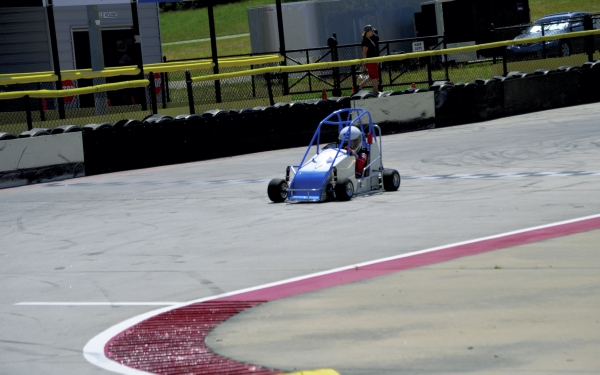 SALISBURY — Jenna Bassett couldn’t contain her excitement and the big smile on her face told it all — she took 15 laps around the Quarter Midget race track and she was hooked.

The 11-year-old was one of about 40 children who went to a recent promo day at the track to have some fun and see if they’d like to try their hand at racing.

Her father, Shawn, read about the promo day event in the newspaper and thought Jenna would like racing. Bassett said racing was something he loved as a child. He raced for 16 years. The Rockwell resident said he took his daughter to races at the Millbridge Speedway, which is where he believed her interest was sparked.

Jenna was outfitted with a helmet and all of the safety equipment and just before she made her laps around the track, she received a quick safety lesson from Quarter Midget Association president Brett Anderson.

“Probably 80 percent of them have no racing experience,” Anderson said of the children who attend the promo days.

“It’s the club’s way of letting them try it out before investing,” he said.

Anderson said there are some moderate introductory costs including uniforms, but getting custom cars can get expensive because they have to be built to certain specifications.

He asked Jenna the same question he always asks newbies before they take laps, “had she ever raced before,” to which she replied no.

She took her laps around the track and afterward quickly set off to ask her father and grandfather to be her sponsors.

After hearing about the promo days, Richard Davis and his wife, Amanda, thought their 4-year-old son Clayton would be interested in racing around the track. The couple, along with their other son, Sawyer, 2, waited as Clayton got outfitted with a helmet and circled the track.

He was a little uneasy at first, but then after his laps it was hard to get him to stop.

Steven Morais and his wife brought their daughter Jordana, 7, to test the track. She was interested in racing and the family said Salisbury was the closest location where she could participate. The family traveled from Myrtle Beach, S.C.

Jordana has never raced before, but “it’s something she’s into,” Steven said.

Steven said he enjoys watching racing and his father raced.

Once she was finished with her laps, Steven could see the excitement in his daughter’s eyes.

“I want to be a race car driver,” Jordana said.

All of the cars are slowed down to “rookie speed” said parent volunteer Stephanie Loden.

The N.C. Quarter Midget Association track is run by parent volunteers, who build and repair cars, help children get suited up in fire resistant driver suits, helmets, and make sure that all drivers have gloves, neck collars, arm restraints and safety belts.

Typically there around 20 club races per year with a couple of additional national and regional races at the track as well. Quarter midget racing is divided into 16 classes and divisions with ages ranging from five to 16.

The racing season begins in March and winds down in November with championship races. There are three promotional days held in a season — March, June and the next will be at 10 a.m., Oct. 8 at the track, 1130 Speedway Blvd., off Peach Orchard Road.

For more information about the Quarter Midget Racing Association visit the website at http://ncqma.com/