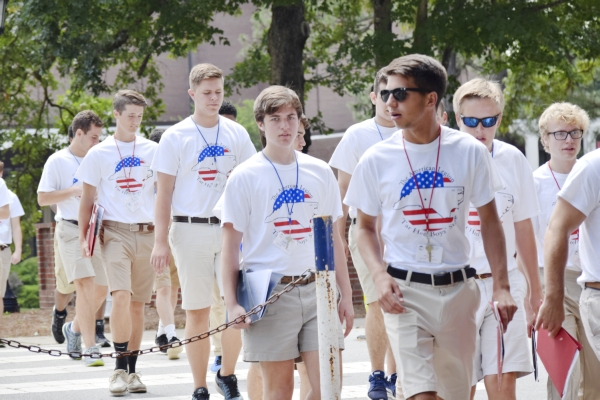 More than 300 rising seniors from across the state attended Tar Heels Boys' State this week at Catawba College. Throughout the week the students immerse themselves in the inner workings of state politics, setting up their own government and electing their own leaders. Rebecca Rider/Salisbury Post

SALISBURY — The budget session stretched into the wee hours of the morning. Langdon Ogburn described the process as “nerve-racking.” But finally, at 1 a.m., it passed – it was two hours shorter than last year’s session.

Ogburn, elected governor of Tar Heel Boys’ State, said he thought it was a solid budget.

“We were able to get everyone everything they wanted,” he said.

For the past week, Ogburn, of Raleigh, and nearly 300 rising seniors from across the state, have been examining the inner workings of politics and government at the 77th Boys’ State. Held at Catawba College, the American Legion-sponsored event invites students in the top third of their class to participate in a weeklong practical study of government. Catawba also hosts Girls’ State, which was held June 13-18.

At each, attendees are divided into fictional municipalities. They create and organize their own local governments, and students hold elections for county and state positions.

Throughout the week, students wearing the dark robes of a state supreme court judge could be seen walking the campus. Elected officials held meetings and organized city activities, while senators, representatives and lobbyists research and write bills to be passed in fictitious legislature.

Each student is also a member of a fictitious political party, which works to develop a party platform and elect leaders. According to an e-mailed press release from Catawba, it’s a hands-on, learn-as-you-go approach to government that can provide practical experience, and seeks to provide understanding of how the North Carolina state government operates.

Students also participate in a talent show and other fun activities. But there are more somber notes, such as the memorial service for veterans and members of the armed forces the students attended Friday.

During the ceremony, keynote speaker Christopher Boyd reminded students that they carried a legacy.

“Today, you are the hope of America – you are their memorial,” he said.

By the time they finish their junior year, most students have a working knowledge of politics, Harper Day of Winston-Salem said.

But it’s helped him understand how the election process works from start to finish.

And while students can’t return for a second year, it’s something they’ll take with them into the future.

Elected governors for Boys’ State and Girls’ State were:

The Earnhardts pay a visit to the flintknappers’ Holy…