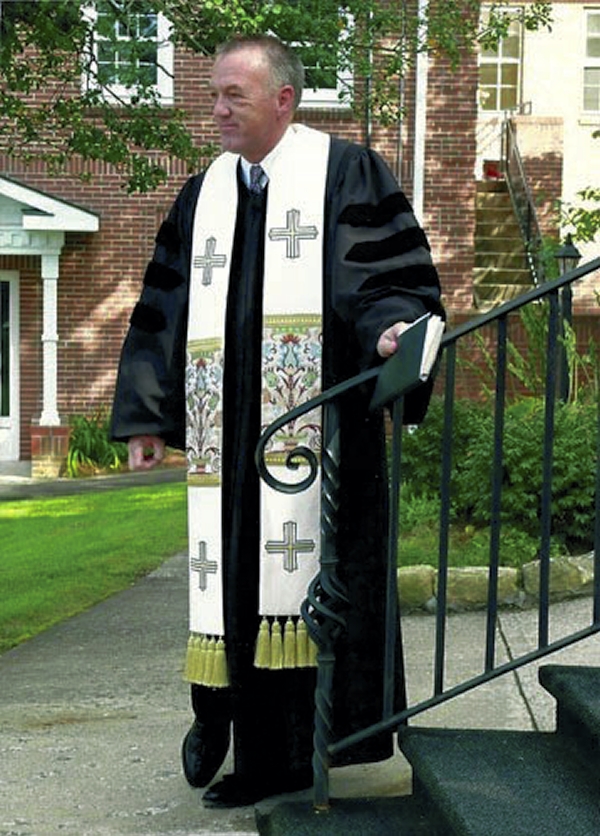 Jim Dunkin holds his congregation close to his heart

The Dunkins' last Sunday at First Presbyterian was June 12

Jim and Leslie having fun at VBS

There are thin places in life, where the human and the divine are closest to each other.

At birth. During illness. At death. In his 12½ years of serving as senior pastor at First Presbyterian Church, Dr. Jim Dunkin has experienced many of these intersections with his parishioners.

He is a pastor, one member says, who holds his congregation close to his heart.

“One of the greatest honors I’ve had is when people allow me into these situations,” he says. “They trust me to be there with them. You don’t get that kind of trust in other vocations.”

Dunkin’s last Sunday at First Presbyterian was June 12 — an occasion made sweet with the baptism of his first grandchild, Benjamin.

Dunkin and his wife, Leslie, are headed to the The Brandermill Church, the country’s largest Union church, located in a planned community near Richmond, Va.

The church is a blend of Presbyterian and Methodist members. Indeed, the pastor who served before him was Methodist, and the one who will follow him will be Methodist, following the alternating pattern for ministers there. Years ago, Dunkin served a blended congregation (Presbyterian-United Church of Christ) in Oklahoma, so he wasn’t unfamiliar with the concept.

“They were attracted to me because I’ve been through this before,” Dunkin says.

At 1,500 members, the new congregation represents a bigger step in Dunkin’s career.

“When I came here, I emphasized discipleship service versus membership entitlement,” Dunkin says. “It was a way to help change the environment. I’m ready to do that in a new place. You don’t know when opportunity is going to knock.”

When Dunkin was serving in Kansas City, Sara Cook’s daughter-in-law, who’s also a pastor, told him, “You need to go to Salisbury.”

Sara Cook was on the search committee at First Presbyterian, and the Dunkins visited Salisbury on Valentine’s weekend. A young member of the committee noted, “We better grab him.”

“We have a very close connection,” Cook says. “As a pastor he has great gifts, as a counselor, and in being with the sick and the dying. I think he’s been an amazing pastor, and he’s been a good friend.”

Dunkin’s in-laws, the Rev. Charles Williams and his wife, Dee, followed the couple here. Williams, a retired Presbyterian pastor, was wise counsel, Dunkin says. “He understood that the call doesn’t always come when you expect it.”

Dee Williams will accompany the couple to their new town.

“As an only child, you just don’t tell your mom goodbye,” Dunkin says.

He’s proud of the fact that the Williamses established a Parkinson’s support group here that remains active.

In a three-page letter to his congregation, Dunkin outlined some of his own successes over the past 12½ years.

He’s most proud of two: the Gift of Years project, a 38-minute video in which he interviewed members over age 90; and the Mission of Mercy Dental Clinic he helped bring to Salisbury in September 2013 and March 2015. Plans are under way for a third clinic to be held this fall.

Even more meaningful, the effort marked the first time the downtown churches had worked together since Hurricane Katrina.

Dunkin and the Rev. Tim Bates brought the community together again in June 2015, four days after the shootings at Mother Emanuel AME Church in Charleston, S.C.

For weeks after the event that drew more than 300 people, a group of pastors met to talk about racial issues.

Dunkin is strong in counseling, and he’s also strong in the pulpit.

“When I preach, I try to be as genuine as I can be,” he says. “When I’m up there, it’s me. I’ve heard my voice is calming, but I want to keep people on the edge of their seats, too.”

He adds, “The good news of Jesus Christ is too good to miss, and I never want anyone to miss that glorious news that I have been privileged to proclaim.”

Away from church, Dunkin loves to run.

“I can’t tell you how excited I am to live in a community that has 15 miles of paved paths,” he says.

The church overlooks a reservoir, as does the home they’ve chosen that’s just a half-mile away.

“I grew up in Fort Walton Beach, Florida,” Dunkin says, “and to be close to the water is a gift to me. It’s so serene there.”

He adds, “Exercise is critical to me. If I don’t take care of my body, nobody else will.”

Dunkin knows his wife has been an asset in his years of ministry.

“When you find great people, you don’t let them go,” he says.

Not only has Leslie Duncan contributed to the music ministry with her beautiful soprano voice, she’s also served as a teacher for discipleship, a storyteller for VBS, and a mentor for confirmands. She performed in the annual Christmas Traditions concert at Piedmont Players Theatre to raise money for Rowan Helping Ministries.

It won’t be easy for the Dunkins to leave a grandchild who lives just blocks from church. But Dunkin also has a wonderful new opportunity.

“Why would I leave unless God called me?” he says.

The Dunkins will, however, be midway between their daughter, who’s studying at Temple University in Philadelphia, and their son and his family in Salisbury.

Baptizing his own grandchild, he says, was a wonderful experience. So was baptizing 58 new Christians in one service during a mission trip to Brazil.

His last week of work, he presided over the funerals of two members, Ralph Ketner and Nancy Penley.

He was talking with one of Penley’s daughters about two weeks before her mother died.

“Who will marry me?” Elizabeth asked.

Then, Dunkin heard her mother’s voice in the background. “Who will bury me?”

“By the grace of God, I was here,” Dunkin says. “I could help give closure for that family. It was a gift.”

It was, says Lauren Wetter, the youngest of Penley’s three children.

“My faith was never gone,” she says, “but Jim restored it and so much more. I can never thank him enough for everything he’s done for our family. I hope he knows how much he is loved and how much he’s going to be missed.

“He stepped into our lives when Dad died in 2009. I’m fortunate that he buried both my parents, he married Michael and me, and he baptized our three girls. I’m so grateful that he’s been a part of our lives. I will love him always.”

How to correct aggressive tree roots

Trees are hardy plants, and their roots fight back against manmade limits around them. In the urban and suburban landscape,... read more