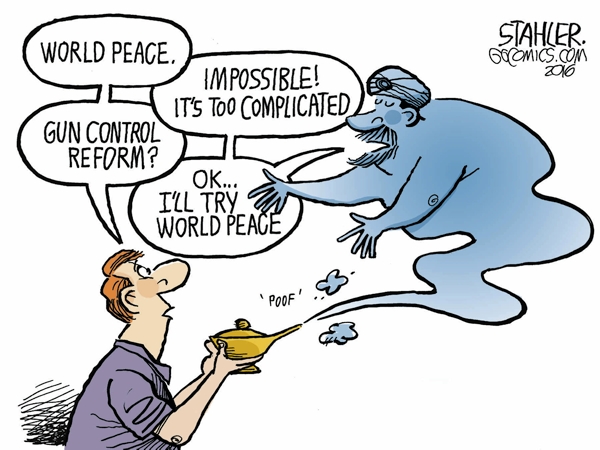 … My Turn: The deadly truth about guns

If you take away the “weapons of hate,” as you call guns, you wouldn’t know whether you had eliminated hate or not, would you? I notice you left out passenger jets and fertilizer bombs, which killed more people than any gun attack.

The bottom line is no, we are not repealing the Second Amendment, and no, you are not getting the guns. I assume personal martyrdom is not high on your life goals so I doubt you personally would try to get them. So before you try to take the guns, you’ve got to ask yourself a question: “Do I feel lucky?” Well, do ya?

I think we can agree that gun violence leading to the massacre of fellow law-abiding citizens is not solely a liberal or conservative question. It’s a problem with the origin and interpretation of the Second Amendment that jeopardizes fundamental human rights and public safety.

There must be a serious examination as to what ideals and agendas are being defended and what action should be taken when it is costing so many lives.

Regarding slavery, I hope it will not take another Civil War to change the Constitution. American slavery existed as a police state within the context of privatized law enforcement known as militias.

I am worried that this nation may be evolving into a new normal related to gun deaths. As automobile deaths maintained at high levels over the years, society has seemed to develop a tolerance with minimal outrage expressed. Through the auto industry’s efforts in research and development and through regulation, vehicles have become safer and highway deaths have been decreasing.

It is difficult to say this, but mass shootings are becoming routine and are seeming to be accepted in some circles as a price for certain perceived freedoms. Gun deaths in the U.S. have or are about to overtake auto deaths. …

The Second Amendment was ratified in an era when firearms available to the public were basically muskets and flintlock pistols which took extensive time to reload. This was the Founders’ frame of reference. It is beyond me how some can assume the Founders would agree the Second Amendment is relevant to the high capacity deadly weapons of today.

ISIS is real, and we are enemy No. 1. One major reason you won’t see them attempt a massive invasion is because to fight in this country, you will have to fight every household. It’s been said there will be a gun behind every blade of grass. I am not in favor of giving up my right to protect my home, my family and my country against any evil person (foreign or domestic) wanting to do harm.

… They (guns) are here to stay. Deal with it, because people won’t willingly give them up. This is not the same as a woman not being able to vote. … This is one change to the Constitution we won’t see.

I was appalled when I read this column. Although I do not know both sides of the story, it is obvious that there is a problem. Violence, regardless of the reason, is unacceptable. Is the Salisbury Police Department reluctant to handle the recent situation?

It’s called hating people are going to hate and wish bad, or even wish they had what others have.

An excellent reuse of a property that is quickly falling into disrepair and has become quite the eyesore. Thank you, council!

The rezoning was critical for two more upcoming rezoning requests that need council approval before the next municipal election: another wedding venue six blocks due south of this one; and adaptive re-use of the former Ellis Graded School (last used as school administrative offices).

I can remember when the Veterans Service Office was located in a storeroom on the second floor of the County Building at 402 N. Main St. The Veteran Service Officer at that time was Grady Howard. Glad to see they have new and larger offices.

I’ve been a Fibrant customer for four years. Would love to get service outside the city limits in the future.

I would absolutely love it if we could receive Fibrant service outside of the city limits. I miss it so much after we had it when we were renting in town. Nobody touches their speeds.

Thanks for making me cry. Wonderful story!

So happy to read this wonderful article about this great family. So proud of each one of them and all they do for each other. This is a real family, with endless love and respect for each other. I am thrilled to be able to call them friends.

We need to teach the squirrels not to smoke cig-a-butts in our parks.

… The old tree must go, but not the memories

I am very sad to see this tree have to come down. My dad was a son of W.A. Corriher. We came up from South Houston, Texas, many a year when my sister and I were growing up and spent the summer playing under Granddad’s big oak tree. This is a sad time but with a lot of memories.

This just breaks my heart. I can’t count how many times we’ve driven down that road to show visitors this beautiful old tree.

Maybe someone could do a bench or special piece of furniture for Mr. Corriher to have and enjoy once the special tree is cut down.

So sad it has to go. I love that old tree as if it were my own in my own yard. Every time I go over to see Wild Bill I have to take a picture of it and take time to stop and admire the magnitude of it while I listen to Wild Bill’s stories. The memories will always be treasured by their family and others.

Perhaps a wood carver somewhere in the area could salvage part of the tree. A horizontal slice from the base of the tree would make a beautiful table. I am sure there are countless ways the tree could be preserved.

What will it take before parents teach their children from infancy to always fasten their seat belts!? I won’t even start my vehicles unless belts are fastened. This habit will carry over.

Since most of us recognize that children are not robots and we can only do the best we can do each day as parents, I’ll stand on the side of Hunter’s parents, who I can only imagine are overwhelmed with grief today and every day for the rest of their lives.

People have a way of being humbled when they harbor such judgmental feelings and thoughts toward others. So when it’s their turn, and pain and devastation are staring them in the face, I hope that there aren’t people like them out there pointing fingers from behind their computer screen, laying blame for something a parent cannot control.

Let me assure you that we taught Hunter to wear his seatbelt. He would even tell me to put mine on before I had a chance to get into the car. During our time of pain, please keep your hurtful judgments to yourself. I’m one of his grandparents.

I am so sorry for your family’s loss. My husband was a teacher at East and remembers what a wonderful young man he was.

Our prayers are with your entire family. This whole community has been shaken.

As a father who has lost a child on Rowan County roads, I’d like to extend my deepest condolences to family and friends. I know how you feel.

I also know how much the Monday morning quarterbacks’ comments can hurt. Try to ignore them. They have no idea what you’re going through. So very sorry you’re experiencing this horrible tragedy.

I assure you that they both were told every time they got in a vehicle to put their seatbelt on; what they do when they are away from parents is up to them. They were both wonderful boys.

And at this point people should be supportive of the families. If you don’t have words of encouragement please do not say anything at all. Be respectful, people.

Behavioral methodology, transdisciplinary planning, ethics, optimal not “reasonable” efforts, research based strategies — no teachers after a brief training can take this successfully back to their schools.

Poor administrators can undo a lot of effort. It requires systemwide changes, accountability through fidelity checks, and ethics. Only a well-trained consultant can do this. Period.