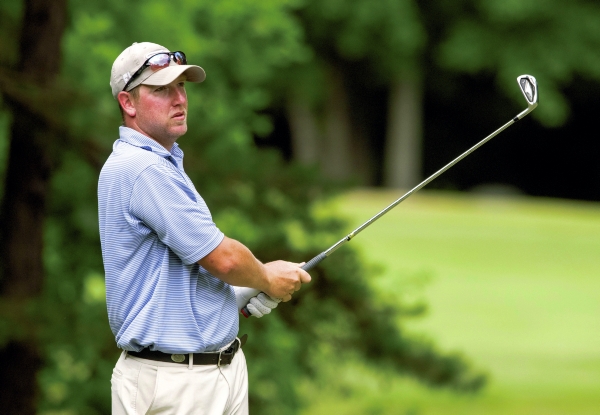 JON C. LAKEY / SALISBURY POST ... No. 1 seed Andrew Morgan watches his drive on the par-3 8th hole, Friday at Warrior Golf Club during the opening round of the Rowan Masters Golf Championship. The 32-man field was cut in half on Friday as play will continue through Sunday. Morgan defeated Brandon Cranfield, 7 and 6.

Rowan Masters under way with most top seeds winning

CHINA GROVE — The opening round of the annual Rowan Masters golf tournament produced a few mild surprises but for the most part the favored higher seeds enjoyed lopsided success here Friday afternoon.

Morgan cruised past Brandon Cranfield, 7 and 6, while Childress needed little more than half a round to eliminate Justin Wiles, 8 and 7 .

Childress was just back from a top 16 finish Thursday in the North Carolina Junior Championship tournament in Wilson when he teed it up for the Rowan Masters, so he likely was glad for a quick match.

“It has been a grind the past four days, so coming out today and riding carts has been a little different,” Childress said. “But I just stuck to my game plan.”

A rising junior at Cannon School, Childress played the front side in 3-under par against Wiles and was six up at the turn. He feels his golf game is coming together well. “Earlier this summer I got off to a rough start,” Childress said,”but I realized everything is there, so it is just a matter of tailoring it to give myself a chance to score well.”

The field of 32 golfers were seeded for the event based on an 18-hole stroke play qualifier. Morgan led the qualifying with a one-under 70, followed closely by Childress at 71.

Friday’s first round featured 16 match play pairings. The second round tees off at 8:00 this morning with quarterfinals following shorty after 1 p.m. The semifinals are set for Sunday morning at 8:00, with the championship match slated for around 12:30 p.m. There will also be a third place consolation match.

The top seeds prevailed for the most part but there were three matches won by the lower seeds. No. 18 Jared Barnette downed No. 15 Kevin Lentz to advance to face Childress in round two.

The 26th-seeded Abraham Post surprised No. 7 Dennis Long, 4 and 3. “I was two up at the turn but I made kind of a silly bogey on 10”, said Post, a former Salisbury High School top golfer and a rising sophomore at UNC-Chapel Hill. “I just hunkered down and played well after that with a couple of pars and then a birdie at the end. He (Long) never caught me, but I could see him in he rearview mirror for sure.”

Post will now face No. 10 Patrick Gregg in the second round. Gregg defeated Robert Jordan, 3 and 2. “I was three up at the turn with three birdies on the front side,” Gregg said. “Robert played really well but I stayed on it and live to see another day.”

The other surprise result saw No. 23 Derek Lipe edge No. 7 William Little, 2 and 1, in a close contest. “We battled to the end,” Lipe said, noting his opponent closed the gap to one on the 16th. “Then I won 17 with a par to close it out. I was just hitting the fairways and hitting the greens today.”

Third seed Phil Miller won, 3 and 2, over Jon Wagner, No. 4 Andrew Purcell, a rising senior at USC-Upstate and a Carson grad, beat Patrick Street, 7 and 5, and will now take on No. 13 Sean Kramer of China Grove, a big 7 and 6 victor over Aaron Mothershead.

Kramer knows the 6,600-yard Warrior course very well and has played in all 14 Rowan Masters events. “I made it to the final four one time,” Kramer said. “It is a tough tournament to win because after the first round, there are so many good golfers still playing.”

No. 5 Bubba Hendren used strong putting to offset the power drives of former A.L. Brown and Appalachian State baseball star Garrett Sherrill, 6 and 5, and will now face No. 12 Shane Benfield, a 5 and 4 winner over Josh Brincefield.

” I just played steady today, “said Benfield. ” I actually played a lot better than I did when a qualified (77). I was right at par or maybe one under.”

No. 6 Keith Dorsett was a 4 and 3 winner over Drue Davis, while Alex Austin of Concord, the No. 9 seed, won over Mike Mills, 7 and 6. Other first round winners were Chase Jensen, Justin Lefler, and veteran local golfer Richard Cobb.