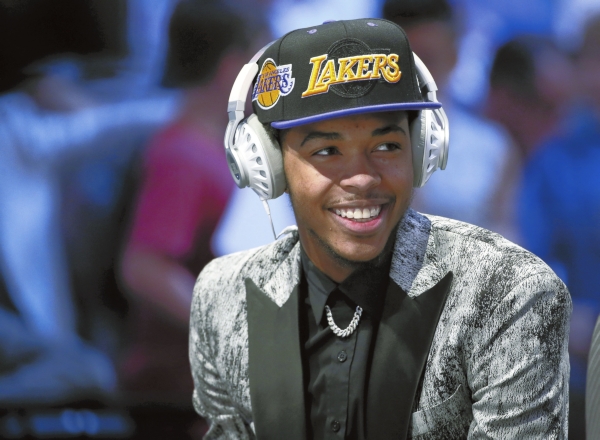 The Lakers selected the lanky Duke forward with the second overall pick in the NBA draft on Thursday night, adding another major piece to the rebuilding club’s young core.

The 6-foot-9, 190-pound Ingram spent one season at Duke, averaging 17.3 points and 6.8 rebounds as the ACC’s freshman of the year. Pro scouts were tantalized by his 41 percent shooting on 3-pointers, and his thin build only heightened the comparisons to Kevin Durant.

After the 76ers chose big man Ben Simmons with the top pick, the Lakers eagerly grabbed Ingram as they rebuild from Kobe Bryant’s retirement and the worst season in franchise history (17-65).

“We’re ecstatic to have him,” Lakers general manager Mitch Kupchak said. “There is no ceiling on him. To date, he’s had a pretty good career in a pretty good conference for a one-year player.”

Ingram joins D’Angelo Russell — last year’s No. 2 overall pick — along with Julius Randle, Jordan Clarkson and Larry Nance Jr. on an intriguing roster assembled by Kupchak, who hopes he has built the foundations of the Lakers’ next powerful team.

The Lakers were the NBA’s worst 3-point shooting team last season. New coach Luke Walton hopes to install large portions of the Golden State Warriors’ offensive approach, which means Ingram should get plenty of outside shots next season.

“We got the player that I wanted in the draft,” Walton said. “I don’t know if he’s the best (player in the draft) or not, but he’s the player I wanted, for sure. What he has the potential of doing, and what he can already do at his age with his length and skill, is very impressive and unique.”

Ingram’s frame was a concern to some scouts, and he realizes he must get bigger to maximize his NBA potential. He gained 25 pounds between high school and the NBA draft process, and he intends to put on more muscle this summer.

The Lakers already began the process of beefing him up during his visit to the team earlier this month. They took him out for two expensive dinners, and he was joined by Russell, Randle, Clarkson, Nance and Anthony Brown one the second night out.

“I don’t see concerns about his weight,” Walton said. “He’s young. He’ll naturally get stronger. … Even though he’s skinny, he had strength to him in the individual workout that he did (for the Lakers).”

“We didn’t coach him how to be such a phenomenal team defender,” Walton said of Green. “He just was, because he sees the game like that. It means that the player is pretty intelligent, and I think that Brandon fits that mold.”

When Ingram was asked what he can contribute to the Lakers in his first post-pick television interview, he immediately mentioned leadership. His character and commitment to teamwork has been credited to the influence of his father, Donald, a basketball referee.

AP Source: Hornets get Belinelli from Kings for No. 22 pick

CHARLOTTE (AP) — The Charlotte Hornets have traded out of the NBA draft — for now.

The Hornets dealt their only draft pick — the No. 22 selection overall — to the Sacrament Kings in exchange for veteran shooting guard Marco Belinelli, a person familiar with the situation said Thursday.

The person spoke to The Associated Press on condition of anonymity because the trade won’t become official until after the NBA’s new salary cap season begins on July 7. That means Charlotte will pick for Sacramento at No. 22.

Belinelli signed a $19 million, three-year deal to join the Kings as a free agent last summer but did not fit in well with the team. The Hornets will be on the hook for $13.26 million over the next two seasons for Belinelli.

The nine-year NBA veteran has played for six teams during his career, winning an NBA championship with the San Antonio Spurs in 2013-14. Belinelli has averaged 9.5 points and 1.6 assists per game during his career and shoots 42.4 percent from the field.

They selected another power forward with their second-round pick, taking Kansas’ Cheick Diallo at No. 33 overall.

Johnson, 21, averaged 17.0 points and 10.4 rebounds per game as a senior for the Tar Heels last season. The 6-foot-10, 230-pound forward was a consensus first team All-America selection last season and the Most Outstanding Player of the NCAA East Regional.

Johnson pulled down a school-record 23 double-doubles last season and became the fifth UNC player to average a double-double for a season. He also became the first Tar Heel to score 20 points and grab 10 rebounds in three consecutive NCAA Tournament games.