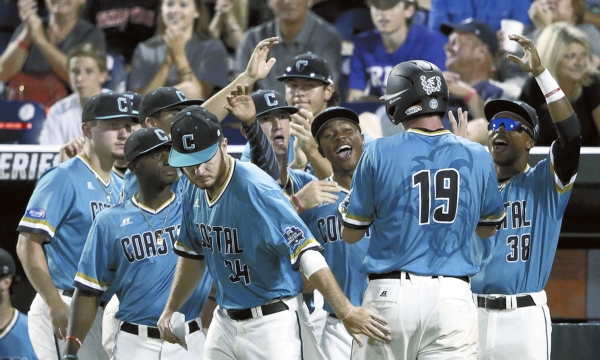 Coastal Carolina (51-17) will play TCU in the Bracket 2 final on Friday night. The Chanticleers, in the CWS for the first time, would have to beat the Horned Frogs in that game and again Saturday to reach next week’s best-of-three finals.

The Red Raiders committed seven errors in three CWS games, and seven of the 12 runs against them were unearned.

Mike Morrison (8-1) pitched a season-high 4 1/3 innings of relief for the win, and Bobby Holmes earned his fourth save. Erikson Lanning (3-4) took the loss.

Morrison, who relieved freshman Jason Bilous with one out in the third inning, is usually the Chanticleers’ closer. He didn’t give up a run until Hunter Hargrove’s sacrifice fly and Michael Davis’ RBI single pulled the Raiders to 7-5 in the seventh.

Holmes struck out pinch hitter Ryan Long to end the seventh and got out of the eighth when, with two men on, he knocked down Tyler Neslony’s hard comebacker and got the ball to first just in time.

He pitched a perfect ninth.

Parrett, a senior who played his junior-college ball 10 minutes away from TD Ameritrade Park at Iowa Western in Council Bluffs, came into the game batting .130 with 10 RBIs. With the left-handed Lanning starting for Texas Tech, the right-handed batting Parrett drew the start at catcher in place of Matt Beaird.

Parrett, who struck out as a pinch hitter against TCU on Tuesday, singled in a run in the second inning off Lanning and two more in the fifth off lefty Parker Mushinski. Both hits came with two outs, with the second one putting the Chanticleers up 7-3.

Stephen Smith’s bases-clearing double had put the Raiders up 3-1 in the second.