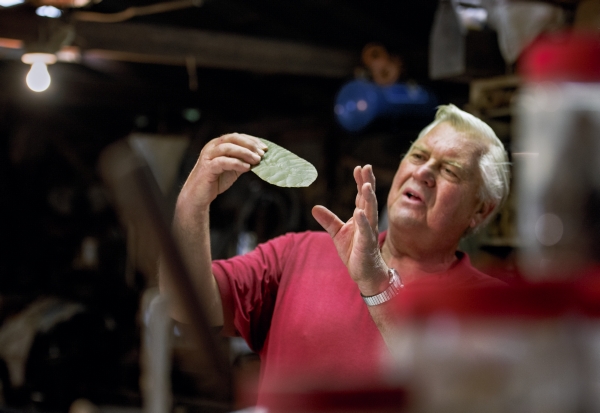 ALLISON LEE ISLEY/SALISBURY POST Bill Earnhardt, local flintknapper, describes his plastic cast of the Sweetwater Biface in his shop at his home in Salisbury on Wednesday, June 22, 2016. The original Sweetwater Biface is three-sixteenths of an inch thick, making it the thinnest piece ever found in North America. Earnhardt created a replica that is only five-hundredths of an inch off from the original. The original is on display at the Museum of Native American History in Bentonville, Arkansas.

The Earnhardts pay a visit to the flintknappers’ Holy Grail

SALISBURY — Bill Earnhardt remembers the moment in Bentonville, Ark., on Nov. 3, 2015, when he looked over at his son, Dwayne, knowing what this meant to both of them.

To flintknapping experts such as Bill and Dwayne, this was their Holy Grail. It was as if they were holding the ball Bobby Thomson socked for a home run in the “Shot Heard Round the World,” or the slingshot David used to fall Goliath.

It was akin to a religious experience, one that required them to wear white gloves.

Standing between them was David Bogle, whose private collection of artifacts make up the Museum of Native American History (MONAH) in Bentonville, where Bogle’s family and many others owe much of their wealth to the success of home-grown Walmart.

One of the prized pieces in Bogle’s collection is the “Sweetwater Biface,” a 9-inch-plus blade dated between 1300 and 1500 A.D. The ovoid, bi-pointed blade probably would have been used by Native Americans as a butchering knife for game, but what makes it so revered within the flintknapping community is how long, wide, thin and completely intact this particular biface is.

The wider a flint biface is, the harder it becomes to make it thin at the edge. The Sweetwater Biface is 9 and 7/16 inches long, 3 and 3/8 inches wide and 3/16 inches thick.

A curator for the Charley Shewey Collection, which owned the blade before Bogle, once wrote, “This artifact is so exceptionally well made that it is possible it may have been intended for ceremonial use, such as being placed with a burial as grave offerings.

“Unbroken and unresharpened bifaces of this type are very rare, so few have survived for comparison studies.”

Some years ago, Dwayne Earnhardt, a nutritionist by day, developed a calibrated-based scoring system for the rating of blades made by modern flintknappers.

Before then, pieces were rated by how close they appeared to replicate authentic artifacts. On the Earnhardt scoring scale, thinner is always better and is the most important factor among the ratings connected to length, width and diameter. A 6-inch or longer blade is much harder to produce for flintknappers, so those receive extra points, too.

In addition, Dwayne, who learned all about flintknapping at the elbow of his father, has written a book on the art of flintknapping, which includes examples of Bill’s work and those of others.

Folks in the know directed Bogle to Dwayne, and over the telephone one day, Earnhardt received an invitation to Bentonville to measure the Sweetwater Biface.

“Anyone who has followed my blog over the years very well knows that the Sweetwater Biface has always been of great interest to my father and me,” Dwayne wrote after seeing the artifact in person. “We have marveled over how unbelievably thin it is and just how it could have possibly been made.”

After receiving his invitation from Bogle, Dwayne, who lives in Rockwell, naturally called his father. Bill Earnhardt has a furniture refinishing shop on Union Church Road, and he has been flintknapping — breaking and shaping flint, obsidian and other stones into knives and arrowheads — for 50 years.

Bill calls what he does “modern flintknapping,” because he likes to think he pushes the boundaries of the craft. He has instructional videos on YouTube and has regularly attended knapping conventions throughout the country for decades.

So when Dwayne told him about the invitation to Bentonville, Bill said, “When are we leaving — tomorrow morning?”

It actually took a bit longer than that, but the father and son made their trip to Bentonville last November and stood with Bogle as he brought the Sweetwater Biface out of its well-protected glass tomb.

The men were in awe of the blade, which has been valued at $250,000. Many flintknappers have used a cast mold taken of the blade to try and replicate it. Bill Earnhardt has come close. Dwayne reports his father’s blade (deep blue in color)) is only 4/100ths of an inch thicker than the Sweetwater Biface based on an average thickness.

Bill took his replica to Bentonville for comparison’s sake.

With the Sweetwater Biface out of its case, the time came for Dwayne to measure it. He and his father were not disappointed. Suffice it to say, the thicknesses, width and length Dwayne measured were Hall of Fame worthy.

“As it turns out, the Sweetwater cast is virtually the same as the Sweetwater biface in thickness, with the cast being only .01 (.25 mm) thinner than the actual blade,” Dwayne wrote.

Dwayne gave Bogle one of his official certificates with the measurements included.

“This is the grand finale of my career,” Bill said of being in the presence of the Sweetwater Biface. “Nothing will ever top this.”

The story behind the finding of the Sweetwater Biface is almost as incredible as the blade itself.

Roland Kamer of Sweetwater, Texas, found the blade while hunting for rattlesnakes during the 1986 Sweetwater Rattlesnake Roundup. It was lying on the surface of the ground in a gully.

Other blades apparently have been found in this area of the Southern Plains, according to the Charley Shewey Collection, but most of those were broken. The blade, made of Texas flint, is thought to be related to the Caddoan culture and Harahey knives, according to the collection.

Bill Earnhardt says Bogle couldn’t have been nicer, and both Bill and Dwayne were impressed with the Museum of Native American History and would recommend it to anyone.

Not that it’s a raging controversy, but the Sweetwater Biface has always been thought to be a “percussion” blade, shaped by striking blows from other stones or tools, like a deer antler. After seeing it in person, Bill Earnhardt thinks it was a “pressure” blade, mostly rubbed and sort of planed into its ovoid shape.

“I think they rubbed it down flat,” Bill says. “… The curator agreed, he doesn’t think it’s a percussion blade.”

Bill and Dwayne have been sort of floating on air since their return from Bentonville.

“This is just such a thrill for us,” Bill says. “I told Dwayne, this is the grand finale.”

this time, the best-known Caddoan ultra-thin blade is the Sweetwater biface, found in 1986 by Roland Kramer. It was found in Nolan County, Texas, near the town of Sweetwater, on the surface in a gully. It measures 9716″ x 33/8″ and is only 3/16“ at the thickest spot. It was originally curated by Charles E. Shewey and is now in the collection of David Bogel.

The extensive artifacts and art on display at the museum are the private collection of David Bogle of Bentonville. His mission is to give visitors a deeper sense of how Native Americans lived. His museum is more than a Bentonville treasure. It is a national repository that honors the lives and cultures of the first Americans.

David Bogle of Bentonville, Arkansas bought a collection of arrowheads from his former Boy Scout leader, the late John Fryer in 2002. What started out as a collection of local ar­rowheads soon became an obsession. David began to build a collection of artifacts from all time periods. This rapidly grew, and he started to concentrate on assembling the rarest and finest he could locate.

Many collectors would be satisfied just owning the collection and showing it to friends. However, David had a novel idea. In­stead of just being a collector, why not share his collection with everyone? Furthermore, he thought it would be great to encourage others to share their collections too. Soon the idea of a museum open to the public was born. David felt certain that if he shared his artifacts in this way, others would develop the same fascina­tion and respect he had for the artwork and skills of Native Americans.

David opened his Museum of Native Ameri­can Artifacts in 2007, utilizing a converted house to display the collection. However, the plan was to go much further, and on July 10th, 2008, the museum opened in a new location utilizing 5,000 square feet of exhibit space.

In order to insure a high standard for this effort, David brought on board Bob Winkle-man, who used to be heavily involved with the University of Arkansas Museum. That fa­cility had closed, due to funding issues, and the collection moved to a huge storage facil­ity. David made contact with the University, and he was given access to the two million ar­tifacts in their collection. Now these artifacts could again be on display for the public to see. Finally, he hired Matt Rowe as a curator and exhibition developer.

the private collection of Bentonville businessman David Bogle, whose passion for acquiring Native American artifacts eventually outgrew his home. The collection may be privately held, but the access to it is an impressive gift to the public.

Illegal burn goes out of control, causes about $500 in damage