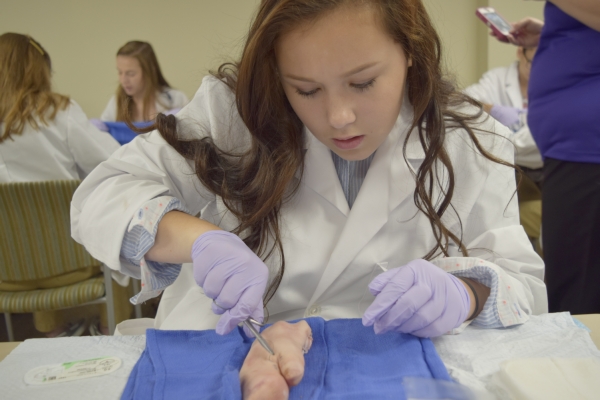 SALISBURY — Alexis Craig grips the silver sliver of a curved needle between the prongs of a needle driver. It’s her second try, and she pierces the skin with great care and threads the stitch through, using tweezers to grab the thread and tie the knot off on her first suture.

Craig is a rising sophomore at Carson High School, but she’s spending part of her summer donning a white coat and a shiny stethoscope. She said she’s thinking about the future as she slowly and carefully ties stitch after stitch. She may only be practicing on a pig’s foot, and her stitches may be crooked, but Craig said she wants to go into the medical field – it’s why she chose to attend Camp Med.

Camp Med is a free camp offered to high school sophomores, juniors and seniors who are interested in medicine. Volunteer Coordinator Jill Rabon said this is the 20th year Novant Health Rowan Medical Center has sponsored the camp, which is funded by Novant Health and a grant from Northwest Area Health Education Center.

“The goal of the camp for the week is to expose them to various medical careers,” Rabon said.

When most people think of a future in medicine, Rabon said, they think of doctors and nurses – but there are far more options. Throughout the week, students are exposed to work in respiratory therapy, nutrition, physical therapy and other career possibilities. They also have a chance to shadow hospital staff.

“They were just everywhere you looked,” Rabon said, recalling this year’s shadowing day. “. . . You couldn’t go anywhere without seeing them in their little white coats.”

Olivia Kyles, a sophomore at Rowan County Early College said it was interesting seeing how the hospital worked from behind the scenes.

“Usually when you come in you’re a patient or visitor,” she said, “but when you’re part of this camp, you feel like you’re a part of it.”

Rabon said that seeing the students tagging along behind hospital staff cheers up patients, often distracting them from worry or procedures. It’s also a hit among the staff.

“Everyone at the hospital gets so excited about Camp Med,” she said.

She never has a shortage of help from hospital employees, and it’s not unusual for staff to mentor students after the week-long camp ends, providing advice and support as budding doctors, nurses and therapists begin their journey and their education.

Over the course of the week, students toured Wake Forest Baptist Hospital, observed a surgery, learned how to intubate a crashing patient and operate complicated tech, practiced splinting a break and sharpened their suturing skills.

And for many of the 29 students who attended this year’s camp, the experience was a crossroads.

Chloe Larios, a sophomore at Carson said the week helped her “see what’s out there.”

That’s what the camp is for, Rabon said – for students to try on different hats and see what options are available.

“Sometimes when kids come in they say, ‘Hey, that’s not me,” she said.

For Kyles, it cemented her desire to study orthopedic surgery.

“They say a lot of women don’t go into that field,” she said, “But just because I’m a woman doesn’t mean I can’t do it.”

Craig said she knows she wants to pursue a future in medicine – she just has to decide which field. For a lot of students, Camp Med helped them narrow down their choice – but for Craig, it did the opposite.

“It just widened things for me,” she said.