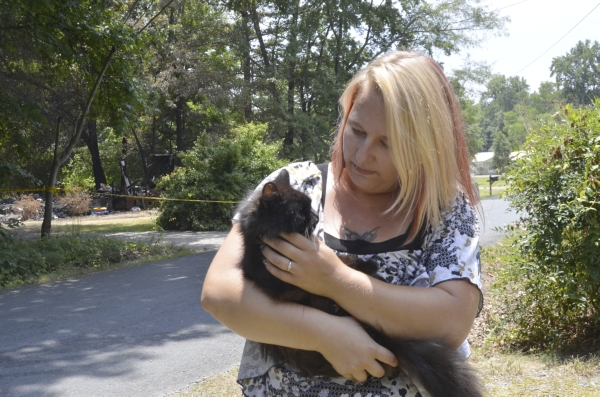 Sierra Howard and her husband, Joe, not shown, have taken on care for the cat that belonged to murder victim Amanda Kay Smith, who was killed Friday and her body left on Leonard Road. The cat keeps returning to the burned home across the street where Smith lived on Honeysuckle Lane, off Old Concord Road. The couple hope to return the cat to the victim's 6-year-old son who was not home when his mother was killed. Shavonne Walker/Salisbury Post

SALISBURY — Stevie Polk gave a picture to his 6-year-old son, Gatlin. The child carries it everywhere, his father said. It’s a tangible reminder of the mother he lost just days ago.

Amanda Kay Smith was murdered and her partially burned body found on Leonard Road, around the same time firefighters were called to her mobile home, miles away.

Investigators said Timothy Smith and Amanda Smith are not related, but the victim was acquainted with the suspects. Timothy Smith and Hall are charged with first-degree murder, felony common law robbery and felony second-degree arson.

Polk said he didn’t know why his ex-girlfriend was killed.

“I don’t think she deserved what she got,” Polk said.

He said Hall and Smith knew each other.

“Stephanie was somewhat of a friend. I don’t know why she would do that,” he said.

Polk said his son does seem to understand that his mother is dead. He said Gatlin says he misses his mother.

The child was staying with his grandparents when the mobile home he shared with his mother was set on fire.

Polk said he and Smith were together for seven years prior to their split. The couple met through friends. He said at the time, Smith was in a bad environment and had just gotten out of a relationship.

The two began as friends and then grew close. They were together two years before Gatlin was born, Polk said.

He said they had a lot in common, including a shared birthday. Both were born on Dec. 24.
“We were like best friends. She was a loving person. She was struggling here and there. I did what I could,” Polk said.

Although they remained close and if Smith needed him he was there, Polk said in the long run they were better as friends.

Now Polk is working to replace some of the things Gatlin lost in the fire including clothing. A friend set up a Go Fund Me page and Polk is humbled that the friend would think of helping Gatlin replace his belongings.

“We would love the help and the blessings,” Polk said.

He said funeral services for Smith haven’t been finalized.

“They were walking down the street and laughing,” Howard said.

Myers woke up Friday to fire trucks lined along Honeysuckle Lane. The couple can see the mobile home Smith rented from their front yard.

“I would never have thought murder,” Howard said.

When they learned about Smith’s death, their thoughts turned to Gatlin.

“I know I didn’t see him the day before,” Howard said.

The couple said Smith’s son spent a lot of time at their home often playing with their 8-year-old son, Clayton.

Howard said she feels for Gatlin, who will grow up without his mother.

“She didn’t deserve that,” she said of Smith’s death.

A cat that the couple say belonged to Gatlin has been seen roaming the neighborhood. They took the black fluffy cat in after Animal Control picked it up a day ago. Howard said the cat has escaped out of their dog door a few times, and every time she finds him near the rubble.

They hope to reunite Gatlin with his cat after a trip to a groomer.

Hall, 30, also faces forgery charges authorities said after she’d stolen and written $600 worth of checks from her grandmother’s account. Investigators had already been looking into the forgery prior to developing Hall as a murder suspect, along with boyfriend Timothy Smith Jr.

Cervantes said she had not given her granddaughter permission, nor had she written checks to her granddaughter. Officials said on June 9, Hall tried to cash a check using her driver’s license and was told it could not be cashed. It appeared the account was overdrawn.

Hagerman told investigators her sister told her she was in West Virginia with her boyfriend and would return that Sunday, June 12.

“We know that was not the case,” said Capt. John Sifford.

Hall and Timothy Smith had been seen with Amanda Kay Smith sometime prior to her death.